How to watch 2019 MLB World Series Game 7 in Australia 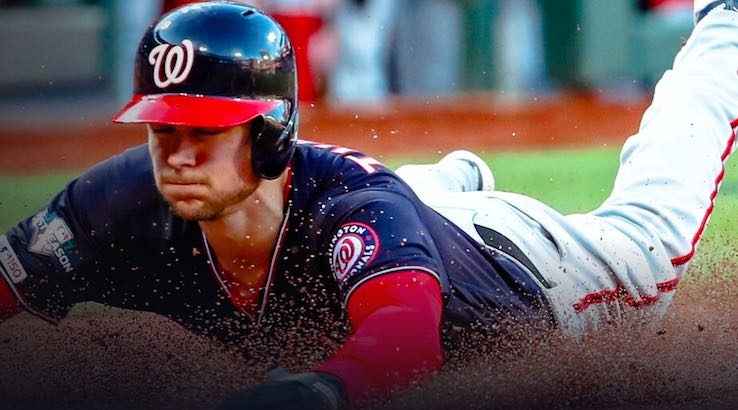 The Houston Astros and the Washington Nationals come head to head for the 2019 edition of the MLB World Series.

SUMMARY: The best way to watch the 2019 MLB World Series live is through Kayo Sports. You can watch all matches between the Houston Astros and Washington Nationals for free using this 14-day trial. This gets you access to all its unique features and 50 additional live sports.
Update: The MLB World Series between Houston Astros and Washington Nationals has come down to Game 7.

The 2019 Major League Baseball World Series is shaping up to be an interesting affair. The Astros won the ALCS this weekend, defeating the Yankees in Game 6. They will face the Washington Nationals, who conquered the Cardinals in the NLCS.

In Australia, the World Series is broadcast on ESPN, so there are plenty of ways to tune in.

When is the MLB World Series?

The World Series is the annual championship series of MLB, contested ever since 1903. The event sees the American League champion and the National League champion coming head to head for the coveted Commissioner's Trophy. The winner will be decided through a best-of-seven play-off.

In 2019, the World Series is scheduled to start on 23 October (AEDT). Here's the complete schedule of Astros vs Nationals games. All times are in AEDT:

Note: As this is a best-of-seven play-off, Games 5 to 7 will only take place if necessary.

Finally, they beat the St. Louis Cardinals in four games in the National League Championship Series. This will be the first World Series appearance for a Washington, D.C. team since 1933.

Here are the current Houston Astros and Washington Nationals team rosters for 2019 ahead of the World Series:

How to watch MLB World Series

In Australia, the 2019 MLB World Series is broadcast by ESPN. Baseball fans have plenty of ways to tune in, either via pay TV or streaming. Here's a quick rundown of all your options:

The most convenient way to watch the 2019 MLB World Series is with Kayo Sports. The multi-sport streaming platform will offer all games live, with replays also available. A Basic subscription costs $25/month and lets you stream on two screens at the same time. Or, you can get a Premium subscription for $35/month, which supports three simultaneous streams.

Besides a generous library of content with over 50 sports, Kayo Sports boasts a user-friendly interface and comes with features that are meant to make sports streaming a breeze. You can use SplitView to watch up to four videos at once on the same screen or dive into a fascinating world of statistics via Interactive Stats.

Key Moments lets you go right to the action that matters in selected match-ups and No Spoilers lets you hide the scores when you're running late. If you're short on time, you can tune in for a Kayo Mini, which is a condensed version of a game and delivers all the highlights in 20 minutes or less.

As for device compatibility, Kayo Sports is available via web or you can download the app to your smartphone/tablet and watch on the go. The platform also works on Apple TV, Android TV, Chromecast and Telstra TV. Read our Kayo Sports review for more information on everything the service has to offer.

ESPN is part of the Foxtel IQ Sport channel pack. You can watch on TV or stream the games with Foxtel GO or WatchESPN. Both apps are available free with your Foxtel IQ subscription.

Besides 13 channels of sports content, subscribers also get the IQ4, the telco's most advanced set-top box. You can record live TV and enjoy content in crisp 4K. Not to worry, Foxtel IQ deals are always available, so you can save big on fees or installation costs.

Alternatively, you can also stream the 2019 MLB World Series with Foxtel Now. ESPN is part of the premium Sport pack, priced at $29/month. This is on top of the Essentials pack, which comes with a mix of Pop and Lifestyle channels for $25/month.

Foxtel Now is available on PCs/Macs and smartphones/tablets via the Foxtel GO app, as well as Chromecast/Airplay, PS4, Telstra TV, Sony Android TVs and the Foxtel Now box. New subscribers can enjoy a 10-day free trial.

MLB.TV delivers all the baseball goodness Aussie fans crave via the Internet, including coverage of the World Series. You can get a Postseason subscription for US$24.99. The service is compatible with a variety of devices, including PCs/Macs, smartphones/tablets, Apple TV, XBOX One, select smart TVs and Chromecast.

ESPN is available on Fetch TV as well, as part of the Vibe channel pack. The channel pack costs only $6/month. However, the total price of your subscription will depend on whether you bought your Fetch box outright or got it through an Internet provider.

How to watch UFC 251 Usman vs Masvidal live in Australia

Three championship belts are on the line when…

Gold Coast can give their unlikely AFL finals…

The Sharks face a test of their recent…