How to watch Melbourne Stars vs Melbourne Renegades in the BBL 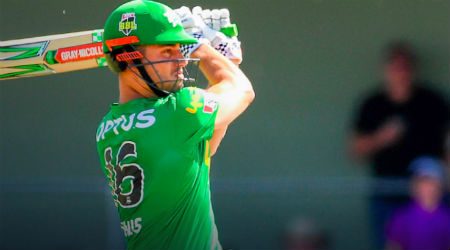 Will the Stars continue their dominant record against the cross-town Renegades or will the defending champions hit back?

This is another match that hasn't been picked up by free-to-air television. Cricket fans will need to have a subscription service to tune in to the Melbourne derby. Kayo Sports and Foxtel are the only broadcasters to show every single match of the current BBL season live.

Channel 7 opted not to show 16 games in the 56-match regular season. Surprisingly that included the Sydney derby last month and this Melbourne showdown. They also can't stream games on 7Plus.

When is the Melbourne Stars vs Melbourne Renegades match?

This prime time clash takes place at the MCG at 7:10pm on Saturday 4 January.

How to watch Melbourne Stars vs Melbourne Renegades live

As this game is live and exclusive to Fox Cricket, your only options to tune in are via Foxtel or Kayo Sports. Unless you are an existing Foxtel iQ or Foxtel Now customer, Kayo is undoubtedly the best way to go.

Read on to find out the only ways to watch every game of the BBL season live, including this local derby at the MCG.

With more than 50 sports at its disposal, Kayo is cheaper than Foxtel and can also boast significantly more features.

For example, SplitView allows you to watch four sports at the same time. It has Alternate Camera Angles, including the Flying Fox camera used in the recent Australia vs New Zealand Test series. Interactive Stats and the Key Moments Timeline are also great additions.

The minimum cost is $25 a month and that lets you watch on 2 screens or devices at once. Kayo Sports also offers a 14-day free trial and you can cancel at any time. For $35 a month, you can get a third screen with a Premium Subscription.

On top of the BBL, Kayo has every Australian Test and WBBL game. Plus, unlike Channel 7, Kayo has all of Australia's ODIs and T20Is. It also shows overseas series such as South Africa vs England and India's upcoming matches.

Compatible on iOS and Android devices, PCs, Mac, Android TV, Telstra TV, Apple TV, Samsung TV (2018 model or later), Chromecast and AirPlay, your device of choice is covered. You can check out our full Kayo review for more information.

The Stars are yet to win the BBL, but have a dominant record over their Victorian counterparts. The men in green and black won seven of the first nine contests between the two sides. Overall, they boast an 11-5 win-loss record over the Renegades.

Who will win Melbourne Stars vs Melbourne Renegades?

The Stars' victory over the Sydney Thunder on Thursday 2 January took them to the top of the BBL|09 ladder at the time of writing. Despite losing 6-19 in a dramatic late collapse, they still got home. With four wins from five matches, the Stars are well placed for a crack at their first BBL crown.

It has been a very different story across town at the Renegades. They have begun their title defence with five consecutive defeats to sit dead last, including their six-wicket loss to the Sydney Sixers on 2 January. That match came down to the penultimate ball but still leaves their season in tatters.

The two sides have their strengths. In Aaron Finch and Shaun Marsh, the Renegades possess two of the top batsmen in the competition. For the Stars, Pakistani Haris Rauf has been a pleasant surprise with the ball and Marcus Stoinis their chief run maker to date.

The Stars might just be starting to think this is finally their year. They can emphasise that with a victory over the struggling champs at the 'G.