How to watch the Marsh One-Day Cup in Australia: TV guide 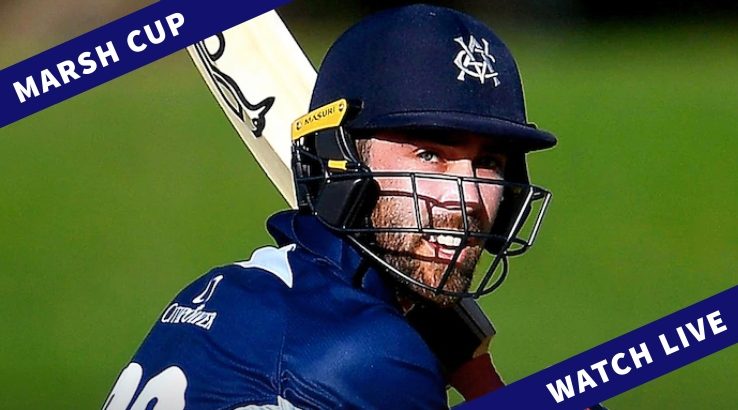 The summer of cricket is on its way with the Marsh One-Day Cup starting on 21 September. Live stream the action or watch on TV.

SUMMARY: The only way to watch every Marsh One-Day Cup game live or on demand is with Kayo Sports. Thankfully, it's also the best (and cheapest) way to watch the summer of cricket in Australia. You can get started for free using this 14-day trial.

The Ashes might have only just finished, but the summer of cricket is only just beginning, with the Marsh One-Day Cup starting on 21 September. The Marsh One-Day cup is Australia's premier men's List A limited 50-over competition. Marsh has taken over from JLT as the new naming rights sponsor.

This year's tournament will run from 21 September through to 26 November. The Rebel WBBL|05 begins in October.

The format of the competition is a round-robin tournament, so all sides clash at least once. Though it must be noted that all states will play seven matches, which means every team will play two opponents twice. There will be 21 matches plus a final to determine the winner.

Which teams play in the Marsh One-Day Cup?

The competition is contested by six different state teams. They are:

Which players will be in the Marsh One-Day Cup?

Then there are also several other contracted Cricket Australia players who will use the tournament to push for selection in international matches held over the summer. Included among those are Moises Henriques (NSW), Aaron Finch (VIC), Adam Zampa (SA), Ben McDermott (TAS), Joe Burns (QLD) and Jhye Richardson (WA).

Where is the Marsh One-Day Cup played?

Interestingly, the majority of matches will move away from venues that have been used in recent seasons. Some fixtures will return to more traditional grounds like the SCG and MCG. Neutral venues will still host a few matches including the Allan Border Field. Then each team will utilise various cricketing grounds from their respective states.

A few different options are available to watch matches from the Marsh One-Day Cup including Kayo Sports, Foxtel and the Cricket Network. Every single match of the Marsh One-Day Cup will be live and on demand on Kayo Sports. Foxtel's Fox Cricket channel will have 13 matches broadcast live and on demand. The Cricket Network will have nine matches available to stream live.

Kayo Sports is the only way you can watch every match of the Marsh One-Day Cup live. Kayo's a breakthrough digital streaming platform that gives you access to over 50 sports. The service is simple to use with a design similar to Netflix that lets you sort via specific sport, competition or live programs.

There's also a bundle of unique features to use like SplitView (watch four sports at once), Key Moments so you can jump to the best highlights and No Spoilers so you can catch up without the fear of knowing a result.

Kayo Sports is available for $25/month which gives you a Basic subscription and gives you the ability to stream to two seperate screens at once. There's also the Premium subscription priced at $35/month and this lets you stream to three devices simultaneously. Kayo is compatible with lots of digital devices, which means you can stream from almost anywhere. For a full review of Kayo take a look at Finder's full guide.

Not only does a subscription to Kayo give you access to the Marsh One-Day Cup, it'll provide you with plenty of other cricket. The other cricket content available is all Big Bash League matches, all T20 Internationals, ODIs and Test matches featuring Australia this summer, WBBL, select women's T20 Internationals and the Allan Border Medal awards night.

Foxtel has a dedicated channel for cricket, but still won't have all the matches of the Marsh One-Day Cup available. As with Kayo, Foxtel has all the other cricket content mentioned above.

To watch sport on Foxtel IQ you need a package that has a Sport HD pack which starts at $25/month. It's also mandatory that you carry the base Essentials pack $49/month which has some Pop and Lifestyle channels available. This drags the cost right up to $74/month depending on current deals.

Alternatively you can sign up with Foxtel Now instead and access the same programming for $54/month. Again the base Essentials pack is a compulsory component of subscriptions, which is what bumps the price up. Both of the Foxtel options aren't likely to be suitable if you're just after the Marsh One-Day Cup, instead you should consider Kayo Sports.

Stream the Marsh One-Day Cup with the Cricket Network

To stream matches with the Cricket Network you need to log in to cricket.com.au. This is a complimentary service that provides fans a free way to watch matches from the Marsh One-Day Cup.

Fans shouldn't get too far ahead of themselves as cricket.com.au will only have nine matches and the service isn't all that user-friendly. Most importantly matches can only be streamed via a laptop or desktop.
Image Source: Kayosports website