How to watch LA Lakers vs New Orleans Pelicans: LeBron vs Zion live 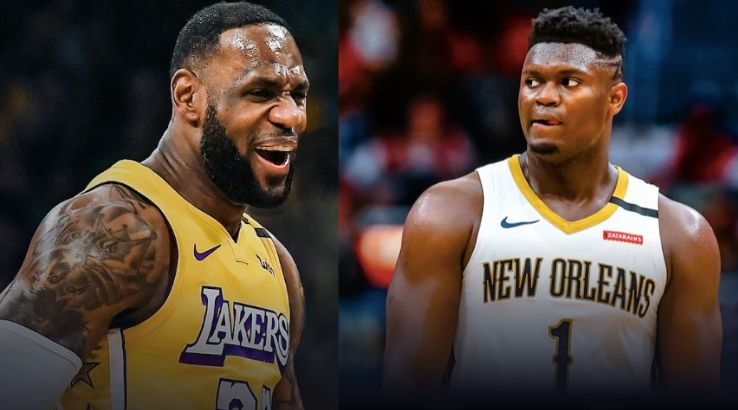 For the first time ever LeBron James and Zion Williamson go head to head when the Lakers play the Pelicans.

Eyes from around the world will be tuned in today as LeBron James and Zion Williamson share the court for the first time. The pair have had their careers followed more than any other two players since they were in high school. They're two of the most marketable stars ranked at number one.

While Zion is the new kid on the block, he has already made waves in the NBA during his short career with his explosive highlights. Injuries robbed him a majority of his rookie season, but now he's fit and firing.

On the other hand LeBron is the veteran leading the Lakers to the top of the Western Conference this season. He too possesses freakish athleticism and continues to defy father time. There's a feud to follow in this game too. The Pelicans and Lakers have been foes ever since the Anthony Davis fiasco.

When is Lakers vs Pelicans?

LA Lakers vs New Orleans Pelicans is scheduled for tip-off at Staples Center at 2pm AEDT, following the Raptors vs Bucks.

How to watch Lakers vs Pelicans

The LA Lakers vs New Orleans Pelicans is an exclusive to ESPN. In Australia you can watch ESPN content via Foxtel, Kayo Sports, Foxtel Now or Fetch TV. The only other way to bypass this is by signing up for NBA League Pass, which has every single game of the season.

Of all of those options, there are two that stand out above the rest, which we will explain next. If not you can see our NBA guide for a further breakdown of viewing options.

Kayo has an average of seven live NBA games per week via ESPN and over 50 sports. Right now as well Kayo has a dedicated Kobe Bryant Netflix-style carousel with tributes and career highlights of the recently deceased Hall-of-Famer, including yesterday's touching memorial service.

It's Australia's premier sports streaming service and has a 14-day free trial available. What makes Kayo stand out from traditional sports viewing platforms is all of its unique features.

After you've exhausted your free trial you can continue on with Kayo for either $25 or $35 monthly. The duo only differ by the more expensive option giving you three simultaneous streams rather than two.

Kayo is available to watch on almost every device too. You can stream via iOS and Android devices, PC, Mac, Android TV, Samsung Smart TVs (2017 models and later), Sony Bravia TVs, Telstra TV, Chromecast and Apple TV. You can see our full Kayo review for more information.

As mentioned above, League Pass is your only way to watch every NBA game. In addition to every game you'll also get access to NBA TV, a 24/7 channel for basketball. League Pass comes in a few variations in which you can try out with a seven-day free trial.

The top package is titled League Pass and gives you access to every single NBA game and all play-offs. Typically it costs $300 a year, but right now there's a mid-season special for $149.99.

While that's perfect for if you want to binge NBA, it might not be for everyone. Your other two options are Team Choice, which lets you sign up for a specific franchise's games or Game Choice where you can watch eight games a month. Once more these are currently available for half price and you can sign up for $84.99 and $54.99 respectively.

You can download the NBA app to watch League Pass on iOS and Android devices, PC or Mac. It's also compatible with Apple TV, Chromecast, Android TV and Xbox One.

Who will win Lakers vs Pelicans?

Without a doubt the Los Angeles Lakers have been on fire this season. In a loaded Western Conference they own the top spot with a record of 43-12. Meanwhile New Orleans started the season slowly, but are now coming home with a wet sail chasing the eighth seeded Grizzlies for a play-off berth.

New Orleans are almost .500 on the road and the Lakers are better on the road than in Staples Center. These two teams will meet again on Monday 2 March, but on that occasion it'll be in the Big Easy. That's an important factor as when NBA teams run into each other so regularly they sometimes split the results.

So I'll back Zion and the Pels to steal one on the road and the Lakers to return serve in a few days. It's a big game for two of the NBA's most marketable stars ranked at number 1 and 15 in jersey sales. Though everyone will be watching this hoping to see Zion and LeBron meet each other at the rim, rather than for the result.

McGregor, Tszyu, Gallen: Main Event has shown some huge fights and you can secure them all via Kayo Sports.

If there are as many punches landed as there have been sledges, Paul Gallen vs Lucas Browne is sure to be a slobberknocker.