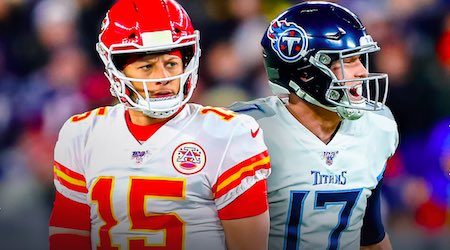 SUMMARY: The best options for watching the NFL Playoffs live are through 7mate or Kayo Sports. You can watch the entire NFL Playoffs for free through 7Plus as well as Kayo Sports with Kayo's 14-day free trial. This gets you access to all its unique features and 50 additional live sports.

Kansas City were expected to be here, Tennessee weren't. Only one of them can reach the Super Bowl in Miami. Here's how to watch Chiefs vs Titans.

Kansas City Chiefs and Tennessee Titans meet in the AFC Championship Game. The Chiefs will be favoured to prevail after a 12-4 regular season and an impressive comeback victory over Houston last week. But it may not be easy.

Few expected much from Tennessee when they scraped into the play-offs as a wildcard. But they have responded with victories over New England and former Super Bowl favourites Baltimore. This is how you can tune in.

When is the AFC Championship Kansas City Chiefs vs Tennessee Titans game?

The Chiefs vs Titans AFC Championship game gets underway at 7:05am AEDT on Monday 20 January at Arrowhead Stadium in Kansas City. The victor plays the winner of 49ers vs Packers at Super Bowl LIV.

7mate and 7mate HD are your viewing options for free-to-air TV. Kayo Sports and Foxtel are your subscription options. You can also stream the AFC Championship game on Fetch TV, Foxtel Now and NFL Game Pass.

We have a full guide to the viewing options for the NFL here.

Channel 7 picked up the rights to certain games throughout the 2019 NFL season. The broadcast of Chiefs vs Titans gets underway at 7am AEDT on 7mate and 7mate HD.

The championship games aren't being shown on its main channels.

Kayo Sports has more than 50 sports for you to choose from including a host of the best American sports. If you are yet to check it out, it offers a 14-day free trial.

On top of broadcasting the games, Kayo also has a range of special features. They include SplitView, where you can watch four sports at once.

These 2 teams have faced off 53 times. Kansas City hold the edge 29-24. They have met three times in the postseason with the Chiefs holding a 2-1 advantage. But Tennessee won their most recent clash, a high-scoring 35-32 in Nashville on 10 November.

Who will win Kansas City Chiefs vs Tennessee Titans?

Tennessee weren't expected to get anywhere near an AFC Championship game. But momentum is a heck of a thing in professional sport.

They knocked off the Texans in the final round of the regular season to snare a wild card spot before upsetting the mighty Patriots and the Ravens. Can they do it one more time and go all the way to the Super Bowl? We don't like to be party poopers, but we think not.

While they have taken down historic quarterback Tom Brady and new star QB Lamar Jackson, knocking off a third chief playmaker is a tall task.

As impressed as we are by the Titans' run, we think it's the Chiefs' time to shine.