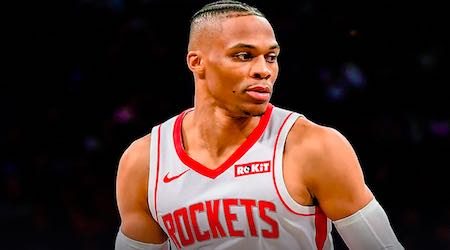 Paul George could make his long-awaited season and LA Clippers debut against the Houston Rockets.

SUMMARY: The best value-for-money option when watching the NBA live is through Kayo Sports. You can watch the LA Clippers vs Houston Rockets for free using this 14-day trial. This gets you access to all its unique features and 50 additional live sports.

We've seen Kawhi Leonard in a Clippers jersey and now we may get to see Paul George. George has missed the start of the season after surgery on a torn labrum following his stint with OKC. Now though, George is capable of playing and will hopefully do so when the Clippers play the Rockets.

The Clippers are off to a solid start at 7–3. So imagine how excited they'll be to add another All-Star swingman to the rotation.

It's a dream debut for fans if George does play. He would be going up against his ex-Thunder teammate Russell Westbrook, in a heavyweight Western Conference showdown.

Westbrook himself left OKC via trade as Houston dreamed to pair the explosive point guard with former running mate James Harden. Houston were shaky out of the gate, but are now 7–3 with four straight wins.

Fans will be stoked to see Leonard play in the ESPN game. He missed the blockbuster clash against the Bucks last week due to the much-maligned load management. This resulted in a $50,000 fine for the Clippers, after coach Doc Rivers said Leonard was fine to play.

There's also an opportunity to see Kawhi, PG13, Russ and Harden live in the flesh this year. Check out our NBA travel guide.

How to watch Houston Rockets vs LA Clippers

The Houston Rockets vs LA Clippers game is live and exclusive to ESPN. In addition to ESPN, NBA League Pass has the authority to show all NBA games live. You'd be best to take a look at our how to watch NBA in Australia guide to explore all your options.

Houston Rockets vs LA Clippers is set to tip off at 11:30am AEDT. It'll be played at the Toyota Center, the home of the Rockets. Following this game will be the LA Lakers vs Golden State Warriors at 2pm AEDT, also on ESPN.

If you'd prefer to jump straight in though then watch with Kayo Sports. Kayo offers new users a 14-day free trial, so you can first watch Houston and LA battle it out live and then test out the platform's special viewing features.

On top of that Kayo has an average of seven live NBA games per week. See the upcoming ESPN NBA schedule to keep up with the basketball season.

Once your free trial expires you can continue on from $25/month to watch from two simultaneous devices or spend $35/month to watch on three devices at once. If you split the cost with a friend then it's very economical.

When you consider the best value-for-money option combined with over 50 other sports and special viewing features, then Kayo is a must-have. Plus if you want to get really savvy combine your NBA games on Kayo Sports with SBS's two free games per week and you'll see an average of nine live NBA matches weekly.