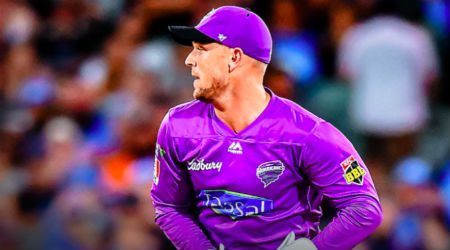 Hobart Hurricanes vs Sydney Thunder gets this year's BBL finals series underway with a knockout match first up called "The Eliminator".

The Thunder are the first team to benefit from the BBL's new five-team finals system. Scraping into fifth place after their final-round victory over Perth Scorchers, they head to Hobart for a one-game elimination: Hobart Hurricanes vs Sydney Thunder.

The Tasmanian side finished with an identical 6 wins, 7 losses and 1 no result as the Thunder. Hobart finished one spot higher due to a superior run rate. The Hurricanes' three straight wins to end the regular season included a victory over the Thunder.

When is the Hobart Hurricanes vs Sydney Thunder finals match?

The opening match in the bid for this year's BBL crown gets underway at 7:40pm AEDT on Thursday 30 January at Blundstone Arena in Hobart. The Melbourne Stars vs Sydney Sixers is on the schedule the following night.

This match is being broadcast on both Channel 7 and Fox Cricket. So you can tune in via free-to-air television, Foxtel iQ, Foxtel Now or Kayo Sports. We have put together a full guide to the BBL|09 season, which you can see here.

While Channel 7 opted not to show all matches of BBL|09, it is showing the entire finals series. Its coverage of "The Eliminator" commences at 7:30pm AEDT on both its main and HD channels. It is unable to show the any matches on 7Plus. So if you're out you'll need a subscription service for Hurricanes vs Thunder.

If you are a cricket fan, Kayo Sports is the place for you. As well as every match of this season's BBL, it has every Australian Test and WBBL game, every Australian ODI and T20I plus a host of international series.

Overall, it has more than 50 sports on offer and a range of special features, such as SplitView, which allows you to watch four sports at the same time.

Alternate Camera Angles includes the Flying Fox camera used in the recent Australia vs New Zealand Test series, which gives you a unique perspective on the action. Interactive Stats and the Key Moments Timeline are also great additions.

A Basic subscription with Kayo Sports costs $25/month and allows you to watch on two screens or devices at once. For $35/month, you can get a third screen with a Premium subscription. There are no contracts and you can cancel at any time.

Kayo currently has a 14-day free trial so you can check it all out.

Kayo is compatible on iOS and Android devices, PCs, Mac, Android TV, Telstra TV, Apple TV, Samsung TV (2018 model or later), Chromecast and AirPlay. There is a full Kayo review for you here to check out.

Borrowing slightly from the finals format used in the AFL and rugby league in Australia, the BBL play-off system was tweaked for its ninth season.

Five teams make the finals instead of four. There is greater reward for the teams that finish in the top two. This season, that was the Melbourne Stars and Sydney Sixers. They meet in "The Qualifier", with the winner to earn a break and host the final.

As seen above, the teams finishing fourth and fifth face off in "The Eliminator". The loser of that is finished for the season and the winner moves on to "The Knockout" against the third-ranked team, the Adelaide Strikers.

The winner of "The Knockout" takes on the loser of "The Qualifier" for the second spot in the final. This match has a name too, of course: "The Challenger".

These sides have met 12 times in BBL history and it's a strong 8-4 edge to the Tasmanians. Hobart won the first 5 straight clashes with the Thunder and also took out the most recent match-up between the teams on 24 January in Hobart.

Who will win Hobart Hurricanes vs Sydney Thunder?

The Hurricanes have all the momentum, with home-ground advantage and test batsman Matt Wade coming off a huge knock with the bat. If they can see off Sydney Thunder's new BBL record wicket-taker in a season, Daniel Sams they should get home.