How to watch Golovkin vs Derevyanchenko boxing in Australia

How to watch Gennadiy Golovkin vs Sergiy Derevyanchenko boxing in Australia 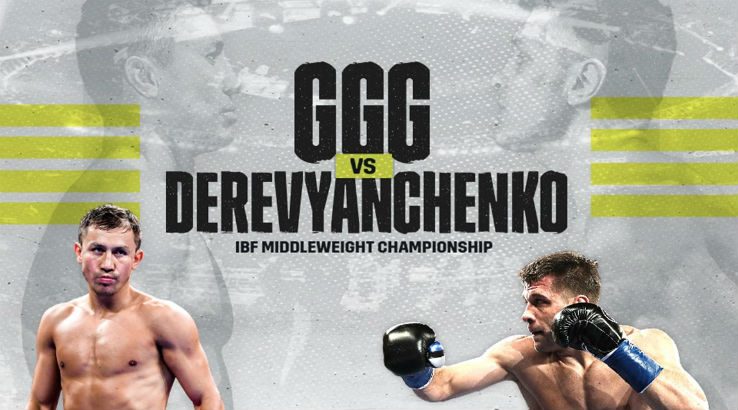 Top middleweights Gennadiy "GGG" Golovkin and Sergiy Derevyanchenko go head-to-head this weekend for the vacant IBF middleweight title. The clash will take place at Madison Square Garden in New York City on 6 October (AEST) and is shaping up to be one for the ages, as both fighters are desperate to get their hands on the coveted title.

Golovkin vs Derevyanchenko will be available to watch live. Here's everything you need to know about the boxing bout and how you can jump on a live stream.

Golovkin vs Derevyanchenko: Who will win?

The history behind the vacant IBF middleweight title is fairly convoluted. Golovkin himself won it back in 2015 after defeating David Lemieux. He went on to defend it against big names like Kell Brook, Daniel Jacobs and Canelo Alvarez.

However, in spring 2018, he was stripped of the title for not fighting IBF mandatory challenger Derevyanchenko. Despite some talk of Golovkin and Derevyanchenko coming face-to-face, the event didn't pan out.

Meanwhile, Derevyanchenko, nicknamed The Technician, turned full pro in 2014. He won several fights before finally getting his crack at a world title at the end of last year. He fought Daniel Jacobs for the IBF middleweight title and lost.

The title went from Jacobs to Alvarez, who was stripped of it in August after failing to negotiate terms for a bout against Derevyanchenko. As a result, both Golovkin and Derevyanchenko should be pretty eager to win the upcoming bout.

Golovkin has the important advantage of experience, but both fighters have a chance to win the bout.

While the headline event of the night is the highly-anticipated encounter between Golovkin and Derevyanchenko, boxing fans will be able to warm up with some interesting clashes. Here's the complete fight card:

How to watch Golovkin vs Derevyanchenko live

In Australia, the fight will only be available through Main Event. Foxtel and Optus with Foxtel customers can order it for $49.95. Then, they'll need to tune in Sunday, 6 October, from 12:00pm to catch the action live.

You can order the Golovkin vs Derevyanchenko fight from the Main Event website, the My Foxtel app, via remote or via phone. If you're an Optus TV featuring Foxtel user you'll need to do it by phone, which incurs a $2 booking fee.

A replay will be available at 1:00am AEST on Monday, 7 October. While Foxtel's Main Event channel 521 usually broadcasts pay-per-view fights, this time fans who order Golovkin vs Derevyanchenko will have to tune in on Foxtel channel 504. That's because GGG vs Derevyanchenko and UFC 243: Whittaker v Adesanya, another pay-per-view event, are broadcast live almost simultaneously.

Fans will have to pay for both GGG vs Derevyanchenko and UFC 243: Whittaker v Adesanya to see the main cards live, but you can still enjoy a fair amount of fighting content via ESPN. This weekend, the channel will broadcast the preliminary card for UFC 243:

UFC fans can tune in live on ESPN on Sunday, 6 October, from 11am. ESPN is available with Foxtel IQ and Fetch pay TV subscriptions, or you can stream it with Foxtel Now. However, the most convenient way for sports fans to tune in is with Kayo Sports.

The multi-sport streaming platform offers coverage of over 50 sports from all over the world, has a user-friendly interface and comes with features tailor-made with sports fans in mind. A Basic subscription costs $25 a month and lets you watch on two screens at the same time, while a Premium subscription supports three simultaneous streams for $35 a month. Either way, new subscribers get a 14-day free trial.

Kayo Sports boasts features like SplitView, which lets you watch on up to four videos on the same screen. If you're short on time, you can use Key Moments to jump right to the action that matters in selected games, or enjoy a Kayo Mini – condensed versions of key sport matchups, which pack in all the highlights in less than 20 minutes.

The No Spoilers setting lets you hide scores when you're running late, while Interactive Stats enables you to dive deep into a world of figures during games. You can read more about the service in our detailed Kayo Sports review.

The streaming platform is available via the web on PCs/Macs, or you can download the app to your iOS or Android mobile device and watch on the go. For the big screen, Kayo Sports works with Apple TV, Android TV, Telstra TV and Chromecast.