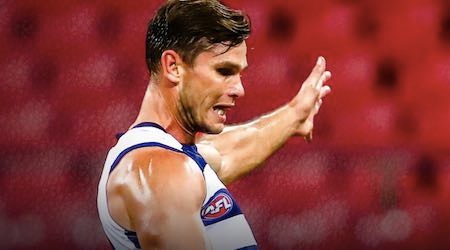 Winless Carlton head to Geelong to take on the Cats in a Saturday night fixture at GMHBA Stadium. This is how you can watch.

SUMMARY: Geelong vs Carlton is exclusive to Fox Sports. If you aren't already an existing Foxtel customer your best option is to watch live on Kayo Sports. You can watch the Cats vs Blues for free with this 14-day trial. This gets you access to all its unique features and 50 additional live sports.

Geelong vs Carlton looms as another tough test for the Blues as they seek to get their season underway. Defeat to Richmond in round one and a narrow two-point loss to St Kilda last week leaves Blues coach David Teague still chasing his first victory of 2020.

The Cats rebounded from an opening-round loss to the Giants in Sydney with a 10-goal thrashing of the Hawks. Geelong will be heavily favoured to chalk up another commanding victory at home in round three.

When is Geelong vs Carlton?

This clash gets underway at 7:40pm AEST at GMHBA Stadium in Geelong on Saturday 20 June.

How to watch Geelong vs Carlton

Channel 7 and Foxtel have rights to broadcast AFL matches in Australia and it varies from state to state. You can see a full breakdown of the 2020 AFL draw here.

But just like Collingwood vs St Kilda earlier on Saturday, this clash is exclusive to Fox Footy. That means Foxtel iQ, Foxtel Now and Kayo Sports are your only viewing options nationwide for this clash between two of the competition's bigger clubs.

For access to every game in every round live, you need Foxtel or Kayo Sports. There is also the AFL Live app you can use across the season, plus Watch AFL if you are overseas. We have a full guide to the AFL season here.

Anyone wanting to watch this match will need a subscription service. Kayo is the best all-round option in terms of features and value when it comes to watching Fox Sports.

You can watch Geelong vs Carlton for free thanks to Kayo's current 14-day trial. After that, a Basic subscription to Kayo is $25/month to watch on two screens at once or $35/month for a third screen. You can check it all out in our Kayo Sports review.

Kayo also has a wide range of special features to add to your viewing experience. SplitView lets you watch up to four sports at once on the same screen. You could watch Geelong vs Carlton and Brisbane vs West Coast live at the same time on SplitView. Both of those matches get underway at 7:40pm AEST.

Other features include Interactive Stats, No Spoilers, Key Moments and much more. In total Kayo broadcasts over 50 sports, including a wide variety of timeless content. It is compatible with Macs and PCs, plus iOS and Android devices, Chromecast, Apple TV, Android TV, Telstra TV, Sony Bravia TV and Samsung TVs (2017 or later).

Who will win Geelong vs Carlton?

It would take a brave punter to pick the Blues in Geelong. Carlton no doubt have some talent on their list, starting with Brownlow Medal fancy Patrick Cripps in midfield. But Teague's line-up doesn't yet have the balance or consistency to compete with the top teams.

The Cats are a juggernaut at home and it would be a shock for anything other than a comfortable Geelong victory to transpire.