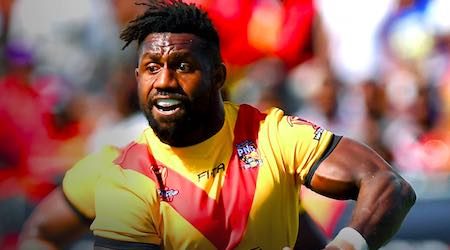 The Oceania Shield is on the line between Fiji and PNG. Find out how to watch and see who'll win.

While Fiji and PNG aren't the same type of powerhouse as the likes of Australia they aren't to be taken lightly. No country is as passionate about rugby league as PNG. In fact it's the only country in the world where rugby league is the national sport.

Fiji is much the same with the team so passionate to represent the country, they'll be in tears pre-game. After the way Fiji decimated Samoa last week, people have called the Fijians the next Tonga on the international rugby league scene.

Though the first task at hand is for one of these nations to win the Oceania Shield. The winning team will be promoted to contest the Oceania Cup against Tonga and New Zealand next year.

It will be tough to predict a winner though. Fiji are in outstanding form, but PNG won the last match between the two back in 2018 and have historically been troublesome for Fiji.

When is Fiji vs PNG?

Fiji vs PNG begins at 3:20pm AEDT at Christchurch Stadium. The match precedes a clash later on between New Zealand and Great Britain.

How to watch Fiji vs PNG live and free

The Fiji vs PNG fixture is available via free-to-air TV and pay TV. The Nine Network has designated the match to be broadcast on Gem. While FOX LEAGUE has picked up all rugby league internationals which can be accessed through Foxtel and Kayo Sports.

See our how to watch rugby league test matches article if you're after a full breakdown.

In our opinion of all your options Kayo Sports stands out as the best. Kayo streams all games of the NRL live, World Cup 9s, select Super League matches and all the internationals. So if you're a true fan that loves to follow the game sign up with a 14-day free trial.

Kayo has over 50 sports including every single rugby league test match. Although the rugby league calendar is almost done Kayo has the best coverage of footy year round. Kayo will also have the returning NRL Nines in February.

Once the footy season is over you can still get your sporting fix with Kayo thanks to the summer of cricket, NBA, A-League, NFL and even more. Plus if Kayo isn't a fit for you then simply cancel before your trial expires and you won't be billed.

If Kayo is suitable you can continue on with a subscription. The Basic subscription is priced at $25/month and lets you stream from two devices at once. Otherwise for $35/month you can have the Premium subscription which allows three simultaneous streams.

Give the free trial a go and make the most of it. Use the special features such as SplitView to stream four different programs at once, Interactive Stats and more. You can watch Kayo on iOS and Android devices, Android TV, Telstra TV, Apple TV, Chromecast, laptops and more. See our full Kayo Sports review for more information.

Parramatta superstar winger Maika Sivo is the only change to the Fiji side that romped home against Samoa last week. Sivo missed last week's match through suspension but now returns at the expense of Isaac Lumelume.