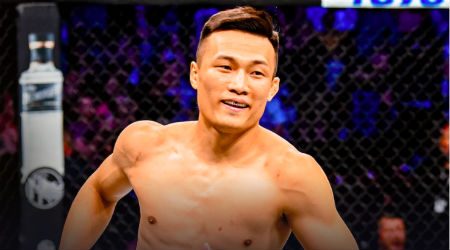 Check out one of the best headlines in MMA for Frankie Edgar vs The Korean Zombie in UFC Fight Night 165, closing out another huge year in the octagon.

Hometown hero Chan Sung Yang (15-5 record) was originally slated to face Brian Ortega, before the latter pulled out with a knee injury.

So Frankie Edgar (23-7-1) stepped in to fill the breach, a decorated fighter and former UFC Lightweight Champion who has previously faced the likes of Jose Aldo, Max Holloway and Ortega.

Jung is one of the more entertaining fighters in the sport and will be determined to put on a show in front of his home fans. There are also a number of Koreans involved in the earlier fights on a busy card.

When does UFC Fight Night 165 Edgar vs Sung Jung start?

The preliminary card for this UFC event starts at 6pm AEDT on Saturday 21 December. The main card gets underway at 9pm AEDT, with six fights scheduled.

Where is UFC Fight Night 165 Edgar vs Sung Jung?

Chan Sung Jung has the honour of performing in UFC Fight Night 165 in front of his home fans. Sajik Arena in Busan, South Korea is the venue.

ESPN has the rights to this great night of fighting, so that gives you a number of ways to watch UFC Fight Night 165. You can live stream or watch on your TV via Kayo Sports, Foxtel Now or UFC Fight Pass. Read on to see all the options so you don't miss a single kick or grapple.

Kayo Sports offers a range of features unmatched by other sports broadcasters and has coverage of over 50 sports, including plenty of MMA. You can catch all of UFC Fight Night 165 live. But if you don't have time for that, you can always watch a replay in your own time.

Kayo Sports starts at $25/month for the Basic subscription, which lets you watch on two screens at once. If you would like the option of a third screen, sign up for the Pro subscription at $35/month.

If you want a chance to test it all out before signing up, Kay Sports offers a 14-day free trial. As well as replays, Kayo Sports also has SplitView, so you can watch four videos on the same screen.

If you are into your stats, the Interactive Stats feature has you covered. Other options are No Spoilers, Key Moments and Kayo Minis for a quick recap available shortly after the event has finished.

You can download the app to your smartphone or tablet or access it via the website. It also works on Apple TV, Telstra TV, Android TV, Chromecast and Samsung TVs made in 2018 or later. For more information check out our detailed Kayo Sports review.

With the Korean Zombie's clash with Frankie Edgar on ESPN, fight fans can catch it on television with a Foxtel iQ subscription that includes the Sports HD channel pack. You can also stream UFC Fight Night 165 on your laptop or mobile device with Foxtel GO or WatchESPN. Both apps are free with your Foxtel subscription with the Sports HD pack.

Foxtel users get access to iQ4, the only broadcaster that offers 4K quality in Australia. You get access to 13 sports channels and Foxtel iQ deals are regularly available.

UFC Fight Night 165 is also available on Foxtel Now and you can check out our full guide here for the list of devices. It also offers a 10-day free trial.

Fetch TV offers ESPN as part of its Vibe channel pack, which costs just $6/month. Yet the total cost of your subscription will depend on whether you bought your Fetch box outright or through a broadband provider.

UFC also offers its own official streaming platform, UFC Fight Pass. At just $7.99/month, it offers a whole range of options to satisfy the most diehard of fight fans. It's compatible with smartphones and laptops, Xbox One and Xbox 360, Apple TV, Chromecast, Roku, Samsung and LG Smart TVs.

Who will win Edgar vs Sung Jung?

It is always risky for fighters to agree to late call-ups to replace a fellow combatant who is forced to withdraw from a card. The fact Frankie Edgar has to go into the Korean Zombie's home country just adds to the difficulty.

Jung possesses plenty of power and explosiveness on his feet, while Edgar is a polished fighter in his own right. We're expecting a close contest but it's hard to go past the home-town man.