How to watch Conor McGregor vs Donald Cerrone UFC 246 live 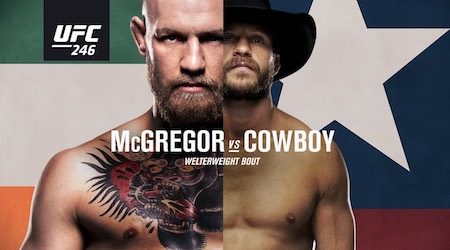 Can McGregor still hold his own in the Octagon or has he lost his edge?

SUMMARY: The McGregor vs Cowboy fight is exclusive to PPV, but you can get the entire preliminary card on ESPN live through Kayo Sports. You can watch all UFC 246 prelims using this 14 day trial. This gets you access to all its unique features and 50 additional live sports.

McGregor vs Cerrone is here. McGregor's last fight was way back on 6 October 2018, when he was badly beaten by undefeated Russian Khabib Nurmagomedov. A brawl broke out after that clash which led to both fighters being fined and banned.

Cerrone, on the other hand, fought four times in 2019. You can read our full preview below. The co-main event pits Holly Holm against Raquel Pennington in a rematch five years in the making. The fight was originally scheduled to be part of UFC 243, but Holm withdrew due to injury.

When is Mcgregor vs Cerrone UFC 246?

The early prelims commence at 11am AEDT on Sunday 19 January with 2 fights. The preliminary card gets underway at 12pm AEDT with the main card then starting at 2pm AEDT. It's all taking place at T-Mobile Arena in Las Vegas. McGregor's fight should start around 4pm AEDT.

How to watch UFC 246 McGregor vs Cerrone

There is a range of viewing options for UFC 246. ESPN is showing the preliminary card, while the main card is exclusive to pay-per-view on Main Event. You can see our complete guide to watching UFC pay-per-views here.

How to watch McGregor vs Cerrone UFC 246 preliminary card

As the prelims are on ESPN, you can follow along with Foxtel, Kayo Sports, Foxtel Now, Fetch TV and UFC Fight Pass. Among these options, Kayo is your best bet to get eyes on the preliminary card.

How to live stream UFC 246 via Kayo Sports

If you are a UFC fan, Kayo Sports has access to every single UFC Fight Night. It's far cheaper than a Foxtel subscription and you get a 14-day free trial.

You can get Kayo's basic package for $25 a month which allows you to watch on 2 screens. Or for $35 a month, a Premium Subscription gives you 3 simultaneous streams.

Overall Kayo has more than 50 sports on offer and it also has a range of features. It is compatible on iOS and Android devices, PCs, Mac, Android TV, Telstra TV, Apple TV, Sony Bravia TVs, Samsung TV (2018 model or later), Chromecast and AirPlay. You can check out our full Kayo review for more information.

How to watch McGregor vs Cerrone UFC 246 Main Card

While you have a range of options for the preliminary card, Main Event on Foxtel, UFC Fight Pass, Fetch TV and PS4 are the exclusive providers of the main card. So you will need to purchase the fight to watch it live or catch a replay later. This is how you can watch the main card on UFC 246.

How to watch UFC 246 on Main Event

UFC 246 will set you back $54.95 if you have a Foxtel subscription. You can order it via the Main Event website, using the My Foxtel app, your Foxtel remote or over the phone. If you have Optus TV featuring Foxtel, you can also order the fight over the phone only. Ordering through a phone agent will incur an additional $2 booking fee.

How to watch McGregor vs Cerrone with UFC Fight Pass

The UFC's official website is another option for streaming McGregor vs Cerrone. To purchase the fight it will cost you $54.95. You can also sign up to Fight Pass for $10.99 per month or $104.99 for an annual pass.

How to watch McGregor vs Cerrone on PlayStation 4

If you have a PlayStation 4 console, look for Live Events in the PS store. Once you have purchased the fight you can watch it through the "videos" menu. It is $54.95 or $49.95 for PlayStation Plus members.

You can also purchase the fight via Fetch TV for $54.95. Using your Fetch box you just need to go to "manage" and then "subscriptions". Once you have made the purchase you can watch it on TV or your mobile with the Fetch app.

Which pubs are showing McGregor vs Cerrone?

Given the magnitude of this fight, we expect most bars, pubs and clubs to put the fight on. Here's a list of venues who have access to Main Event, though you should check ahead of time to avoid disappointment.

Who will win McGregor vs Cerrone?

Despite his long absence from the Octagon, McGregor (21-4 record) is favoured to defeat Cerrone and get his MMA career back on track. Considering McGregor's last victory was in November 2016, it's an interesting call.

At his best, the Irishman's counter-punching style is difficult to break down and he has a penchant for ending fights early. But he has also been known to tire as fights go on and that may be Cowboy's best chance of an upset.

Cerrone (36-13, one no contest) boasts a distinct height advantage, which also may work in his favour. Either way we're set for an entertaining fight between two men who understand this sport is a spectacle.

There have been plenty of niceties in the build-up. But if McGregor is indeed back to his best and sticks to his plan, we're tipping him to just prevail, but only just. And let's face it, whether you love or hate McGregor, UFC is more entertaining when he is fighting and winning.