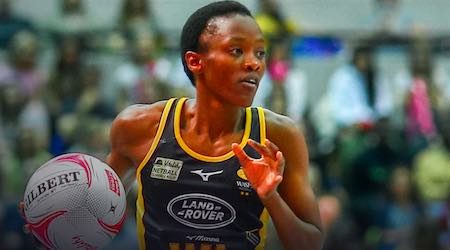 The third edition of the British Fast5 All-Stars Netball Championship is on 12 October. Here are the details on how to watch live or on demand.

SUMMARY: The best value-for-money option to watch the British Fast5 All-Stars live or on demand is through Kayo Sports. You can watch the entire British Fast5 for free using this 14-day trial. This gets you access to all its unique features and 50 additional live sports.

The British Fast5 All-Stars Netball Championship is a special Fast5 netball event. Fast5 netball differs from the rules of a normal netball game. Only five players per team are on the court at once instead of seven. Matches are also shorter, which is designed to speed them up and make them more intense.

The 2019 British Fast5 All-Stars is the third edition of the competition. Wasps Netball are the reigning champions. Loughborough Lightning are the only other team to have won.

When is the British Fast5 All-Stars Netball Championship?

As the event is held at London's Copper Box Arena in England, there's a bit of a time difference. The British Fast5 All-Stars Netball Championship is scheduled to begin on Saturday 12 October at 11:00pm AEDT. Unfortunately for those on Australia's east coast the event runs late into the night. Luckily though, there are several options to watch either live or on demand.

In Fast5 netball, matches are only 12 minutes long. Fans will immediately detect the modified shooting area. The most notable difference is the special all-star five-point line, which resembles the three-point line used in basketball. This differs from traditional netball where it's illegal to shoot from outside.

Inside the normal shooting arc is also a three-point shot, which is around the edge of the normal shooting area. Then there's also the Golden Buzzer Power Play rule. This allows for each goal scored in a quarter by a team to be worth double points and is somewhat similar to rules used in Hockey One and BBL.

The British Fast5 All-Stars Netball Championship is live and exclusive in Australia to FOX SPORTS. This means that you can watch netball via Kayo Sports, Foxtel IQ or Foxtel Now. If you're a customer with a subscription to any of these services then you're all set. If not, signing up to Kayo Sports is your best option and offers a 14-day free trial.

Kayo Sports brings you over 50 sports to a range of devices. You can watch from the website online via your Mac or PC. Most commonly you can download the app to your iOS or Android device and watch. Or you could watch on the big screen direct via Telstra TV and Android TV, or use the assistance of Apple TV and Chromecast.

A subscription to Kayo is priced at $25/month to watch on two screens or for $35/month for three screens. If you're a new customer you should make use of the 14-day free trial.

What really makes Kayo Sports stand out are the several unique features it has. The interface is designed for simplicity and makes it easy to navigate by sport, competition or team. Then there's SplitView, Key Moments timeline, Kayo Minis and the No Spoilers option. Combined these are the perfect tools to watch the British Fast5 All-Stars Netball Championship live or on demand.

Existing Foxtel IQ subscribers can simply contact Foxtel and request to add on the Sport pack for $29/month. If you aren't an existing subscriber and wish to become one, there's a bit of a process. To watch sport on Foxtel and in 4K your minimum monthly bill is $68/month.

This is as it's mandatory you have a selection of Pop and Lifestyle channels. There can be installation costs as well as waiting periods. So it's probably not suitable if you're only after the British Fast5 All-Stars. You're also given access to watch via the Foxtel GO app.

Foxtel Now is another digital streaming service. It's a cheaper alternative to the traditional Foxtel IQ set-top box, but is still at $54/month. This is again due to the constraints that require an Essentials pack subscription. You do have more ways to watch which includes Android TV, Telstra TV, Chromecast, Airplay, Telstra TV, PS4 or the Foxtel Now box.

You're also given access to watch on the go with the Foxtel GO app. There's a 10-day free trial available for new customers.