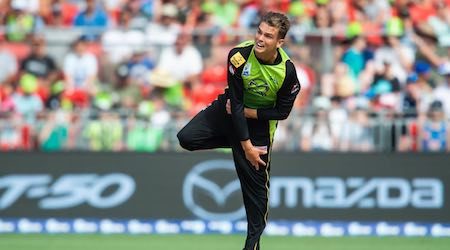 The Big Bash is back! It's Brisbane Heat vs Sydney Thunder in the season opener. You can catch it all live or on demand.

After a long cold winter's wait the BBL has returned. Brisbane Heat vs Sydney Thunder in the first game of BBL|09.

The Melbourne Renegades are the defending champions after claiming their first title with a narrow victory over city rivals the Melbourne Stars in last season's final.

The Stars and the Hobart Hurricanes are the only teams yet to win the tournament, something they will be aiming to set right this coming campaign.

There will be plenty of interest in the Heat, who are being led this season by former Australian coach Darren Lehmann. They face a Thunder outfit captained by explosive batsman Callum Ferguson and coached by former New Zealand quick, Shane Bond.

When is Brisbane Heat vs Sydney Thunder?

The season-opening clash between the Heat and Thunder commences at 6:10pm local time (7:10pm AEDT) at The Gabba in Brisbane.

How to watch Brisbane Heat vs Sydney Thunder

Once again this season you have a number of options available for all the on-pitch action. They include free-to-air television, pay TV and streaming services. Fox Cricket and Kayo Sports are showing all 61 games across the season, 16 of which will be exclusive. Channel 7 will show 45 matches in total. All three are broadcasting the finals series.

Channel 7, Kayo Sports, Foxtel iQ and Foxtel Now are all showing the Heat taking on the Thunder and you can see more details below.

Channel 7 is showing this match live on both its standard channel and on 7HD starting from 7pm AEDT. You can't stream from 7Plus.

Cricket is just one of more than 50 sports being shown on Kayo Sports. The service offers a number of special features, so you don't need to miss a minute of the action.

With so many sports available, SplitView allows you to watch four sports at once. There are also options such as Interactive Stats, Key Moments Timeline and Kayo Minis, where you can quickly catch up on the action if you aren't able to see the Heat vs Thunder live.

There is a Kayo Sports app for iOS and Android devices for you to tune in. You can also view the BBL through Apple TV, Android TV, Chromecast, Telstra TV and Samsung TV (2018 or later) or from the website on your Mac or PC.

To see if Kayo Sports is right for you, you could start your 14-day free trial by viewing all the options at your disposal during this BBL season-opener.

Kayo Sports has a $25/month Basic subscription and a $35/month Premium subscription and you can cancel at any time. You can also check out our live stream cricket guide to see the full extent of Kayo's cricket programming.

It is often worth getting in touch with Foxtel about any deals it has running. Foxtel customers are also eligible for its loyalty program and have access to Foxtel GO.

Foxtel is also the only broadcaster currently with access to 4K television in Australia.

Foxtel's digital streaming service Foxtel Now is another option to view the big clash at The Gabba. For this option, you need to bundle the Sport pack ($29/month) with the Essential pack ($25/month), meaning it will cost a minimum of $54/month.

That makes it more than double the cost of Kayo Sports, although you do get access to Foxtel GO and more than just sports programs. You can watch Foxtel Now on Android and iOS devices, the Foxtel Now box, Android TV, Telstra TV, PlayStation 4, Chromecast, AirPlay, Mac and PC.

Thunder fans, look away now. It's fair to say the Brisbane Heat have owned the New South Welshmen to date. Of the nine clashes between the two teams, the Queenslanders have won seven of them. The Heat are also unbeaten against the Thunder in five trips to the Harbour City.

The one-sided history is perhaps best summed up by their most recent encounter last season. In a match many will remember, Shane Watson's century guided the Thunder to a commanding 4-186 from their 20 overs. With Brisbane struggling at 2-10 in reply, a floodlight failure ended the match, which meant the points were shared in a no-result.

Who will win Brisbane Heat vs Sydney Thunder?

With a line-up that includes South African AB de Villiers, Australian Test batsman Marnus Labuschagne and Joe Burns, plus new recruit Ben Laughlin from the Adelaide Strikers, the Heat are already tipped to be right among the tournament frontrunners.

Laughlin is the leading wicket-taker in BBL history with 95 scalps from his time with the Hobart Hurricanes and Strikers. Veteran duo Chris Lynn and James Pattinson will also be major contributors with bat and ball respectively.

Unsatisfied by their sixth-placed finish last season, the Thunder recruited former Heat assistant Bond as coach and turned over their roster. Watson, Jos Buttler and Pat Cummins are among those that won't be returning to the Thunder colours.

They will get some added inside knowledge from former Heat players Alex Ross and Brendan Doggett, while Bond wanted internationals that could be with the Sydney club for the entire season. So England's Alex Hales and South African Chris Morris have come on board. Usman Khawaja will lead the way with the bat for a young Thunder outfit.

In terms of a winner, the inexperienced Thunder should develop into a strong team over the course of the season. But it's hard to go past the home side getting their campaign off to a strong start and further improving their record in this match-up.