Watch the BBL final live and free: Sixers vs Stars 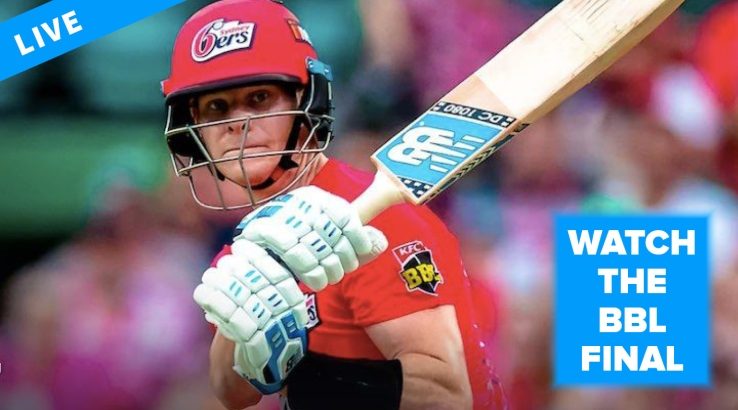 The BBL final is on the line at its Sydney Sixers vs Melbourne Stars, if the rain permits.

Forget Steve Smith, the most powerful force at play in the BBL final of 2020 is Sydney's weather. After a summer punctuated by drought and bushfires, the torrential rain forecast has this match in significant doubt.

It was enough of a concern for organisers to shift the Bushfire Cricket Bash from a BBL final curtain-raiser in Sydney to a standalone fixture at the MCG.

If the match is rained out, as expected, the Sixers will be crowned champions after they won the first final against the Stars and earned hosting rights for the decider. It would be their second triumph after claiming the very first Big Bash League title back in 2011/12.

The Stars will be desperate for some cricket to be played as they are yet to taste BBL glory.

When is the Sydney Sixers vs Melbourne Stars BBL final?

If the rain allows some play, the match between the Sixers and Stars will start at 7:15pm AEDT at the SCG.

All of the BBL|09 finals have been shown on both Channel 7 with ads and Fox Cricket without ads. For the big finale, you can watch on free-to-air television, Foxtel iQ, Foxtel Now or Kayo Sports. The latter, Kayo Sports, provides the additional features of live stats, highlight moments, picture-in-picture, rewind and more.

As the ninth season of the BBL draws to a close, you can also take a look back at our comprehensive season guide here.

If you are checking out Kayo for the first time, it has a 14-day free trial for you to give it a test run. It is compatible with iOS and Android devices, PC, Mac, Android TV, Telstra TV, Apple TV, Samsung TV (2018 models or later), Chromecast and AirPlay.

It boasts more than 50 sports in total, including an extraordinary amount of cricket content. Every match of this season's BBL, every Australian Test and WBBL game, every Australian ODI and T20I and a host of international series are all live and in HD.

Kayo also has a range of special features. Alternate Camera Angles includes the Flying Fox camera used in the Australia vs New Zealand Test series over the summer is one of them. Interactive Stats, SplitView and Key Moments are also among the options.

Kayo will cost you $25/month for a Basic subscription and you can watch on 2 screens or devices at once. For $35/month, you can get a third screen. There are no contracts and you can cancel at any time. There is a full Kayo review for you here to check out.

Channel 7 opted not to show all matches of BBL|09. Only Kayo Sports and Foxtel committed to all fixtures throughout the season. But the free-to-air network is showing the finals series. Channel 7's broadcast of the Sixers vs Stars match starts at 7pm AEDT on both its main and HD channels. It is unable to show the match on 7plus and of course you don't Kayo's special sports viewing features, pre and post shows and ad-free experience.

How does the BBL final work?

The new five-team BBL finals system has been run and we are left with the top two teams at the end of the regular season. After the Stars finished top of the ladder and lost their subsequent first final to the Sixers, they benefited from the second chance.

But the Sydney side made the most of their top-two finish. That win over the Stars gave them a home finale. It also gives them the title if the match is rained out.

If the heavens clear long enough to have some play, a minimum of five overs per innings is required to constitute a match.

History of Sydney Sixers vs Melbourne Stars in the BBL

This year's finalists are well acquainted. This will be their fourth meeting this season alone. The Stars took out the first match at the MCG, while the Sixers have claimed the past two. Overall they have met 13 times and the Victorians hold the edge, 7-6.

Who will win Sydney Sixers vs Melbourne Stars BBL?

The Stars started the season on some sort of a mission. No less than 10 wins from their first 11 matches vaulted them ahead of the pack and signalled their intent. But their 8-game winning streak was ended by the Sixers at the SCG on 20 January.

While the Melbourne side set the early benchmark, the Sixers did their best to chase them down. A consistent season from the Sydneysiders drew them within just one victory of the Stars at the end of the home-and-away campaign.

We suspect rain and therefore the Sixers will be the winner. But if some cricket is played, Marcus Stoinis might just underline his Player of the Tournament status with another match-winning knock with the willow.