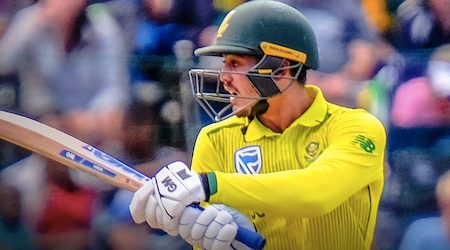 The South African tour continues with the Australia vs South Africa ODI cricket series. This is how you can watch.

After the tourists claimed a 2-1 triumph in the T20I showdown, it's now time for the Australia vs South Africa ODI cricket series.

The Australians claimed heavy victories in the first and third Twenty20 matches. Key players such as David Warner, Aaron Finch, Steve Smith, Mitchell Starc and spinners Ashton Agar and Adam Zampa all played their parts in the series win.

Now the Proteas will try to exact some revenge when they face 3 more clashes in the 50-over format.

When is the Australia vs South Africa ODI cricket series?

Unlike the recent trio of T20 games, the ODI's are on at a much friendlier viewing time.

How to watch the Australia vs South Africa ODI cricket series

This series is not on free-to-air television. Australia's entire tour of South Africa is live and exclusive to FOX CRICKET. That means Foxtel iQ, Foxtel Now and Kayo Sports are your options to view what should be another intense series.

Kayo Sports is the place to be for cricket fans. Currently Kayo also has every Australian ODI, India's current Test series against New Zealand and the entire T20 Women's World Cup.

Kayo has a 14-day trial so you can watch the entire series against South Africa for free. Cricket is just 1 of more than 50 sports available on Kayo and we have put together a full review of the service for you.

Subscriptions for Kayo Sports start from $25/month for the Basic option, where you can watch games on 2 screens or devices. The Premium option is $35/month and gives you 3 screens.

The platform also boasts a number of special features, such as Kayo Minis, alternate camera angles, SplitView, where you can watch four sports at once, Interactive Stats and Key Moments.

If you have a Foxtel iQ subscription including the Sports HD pack, you are all set. If not, you need to get both the Sports HD pack for $25/month and the Foxtel Plus package for an additional $49/month. This blows the total monthly bill out to $74 per month.

Foxtel is the only broadcaster in Australia that currently offers users 4K sports content. You may also find that you're up for some potential installation costs, though Foxtel iQ deals are also regularly available.

Foxtel Now is the pay TV giant's digital streaming service. You have to subscribe to the Essentials pack in addition to the Sport pack, which costs $54/month in total. Cheaper than iQ, it's still more than double the price of Kayo Sports.

If you haven't tried it previously, Foxtel Now has a 10-day free trial. We have also put together a full guide which includes the list of compatible devices.

Who will win the Australia vs South Africa ODI cricket series?

The South Africans really are enduring a wretched time, now going 12 months without a series win in any format of the game. They do have a good recent home ODI record against Australia, but their confidence must be shot to pieces.

The Australians really do seem to have rediscovered their groove after the lows of the ball-tampering saga here two years ago. The middle order batting is still a concern, but we'll back the Aussies in for a second consecutive 2-1 series win.

Top meets bottom in the Premier League this week when Chelsea host Norwich in a David vs Goliath tussle.

The 76ers and the Nets can certainly attract the headlines. See what happens when they face off this Saturday.

Arsenal and Aston Villa will both be looking to find form when they meet in the Premier League this week.

This weekend sees 6 of the top 7 play each other - will the top 3 start to pull clear?