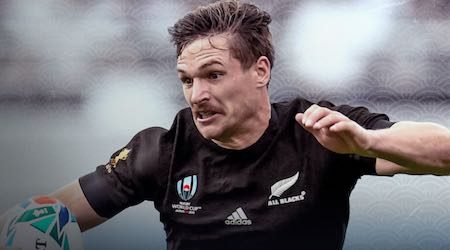 The All Blacks play Ireland in the Rugby World Cup quarter-finals. The two most recent world number ones will clash in a do-or-die battle. Here's your full preview and broadcast details.

SUMMARY: The best way to watch All Blacks vs Ireland live is through Kayo Sports. You can watch the entire Rugby World Cup quarter-finals for free using this 14-day trial. This gets you access to all its unique features and 50 additional live sports.

Ireland entered the Rugby World Cup (RWC) ranked as the best in the world, but the All Blacks have since taken that title back. The two will now meet in the RWC quarter-finals where one team's journey will end. All Blacks vs Ireland is on 19 October.

Who will win All Blacks vs Ireland?

After Ireland lost to Japan during the pool stage, many pundits put a line through them. Ireland's form coming into the tournament was also less than impressive, considering they were ranked number one.

Other than the All Blacks' first tournament clash with the Springboks they've had it easy. The side's last pool match against Italy was cancelled due to Typhoon Higabis.

This will mean the All Blacks haven't played a match in 13 days. Ireland will be looking for any signs of rust and try to capitalise on that potential lack of match sharpness.

Ultimately you can't discredit Ireland's recent record against the All Blacks. No other side in the world can claim they've won two of their past three matches against New Zealand. Maybe that plays on Kiwi minds too, though right now the All Blacks look formidable.

History of All Blacks vs Ireland

The All Blacks and Ireland have played 31 test matches. Of those the All Blacks have won 28. It wasn't until 2016 when Ireland first beat the New Zealanders. The Irish also won at home in 2018, 16-9.

When does the All Blacks vs Ireland RWC match start?

All Blacks vs Ireland will be played on Saturday 19 October at 9:15 pm AEDT at Tokyo Stadium. For details about the rest of the knockout matches see our full Rugby World Cup schedule.

How to watch All Blacks vs Ireland Rugby World Cup

In Australia, only some RWC quarter-finals matches are broadcast on free-to-air. Your best option to get around this is to watch the All Blacks vs Ireland on Kayo Sports using the 14-day free trial. Foxtel also has this match, but is a less than ideal alternative.

After your free trial is complete you can decide whether to continue your subscription. Subscriptions to Kayo come in two variants. First up is the Basic subscription for $25/month, which lets you stream to two screens at once. The Premium subscription costs $35/month but supports streaming to three devices simultaneously.

Kayo is a sports fan's dream, with several unique viewing features and over 50 sports. Users can watch up to four sports or programs at once with SplitView. There's also a Key Moments timeline, Interactive Stats, No Spoilers setting and Kayo Minis which are special condensed games.

You could also test Kayo out on Saturday by watching either the Wallabies vs England or the Rugby League World Cup 9s. Kayo is available on most digital devices. You can watch online by logging in to the website from your PC, laptop or Mac.

It's also available to stream via the app on iOS and Android devices. If you'd prefer to watch on the big screen, then you can do that too. This is supported with the help of Apple TV, Chromecast, Android TV and Telstra TV.

If you're in Sydney or its surrounding suburbs you could instead find a rugby bar.

All Blacks vs Ireland team lists