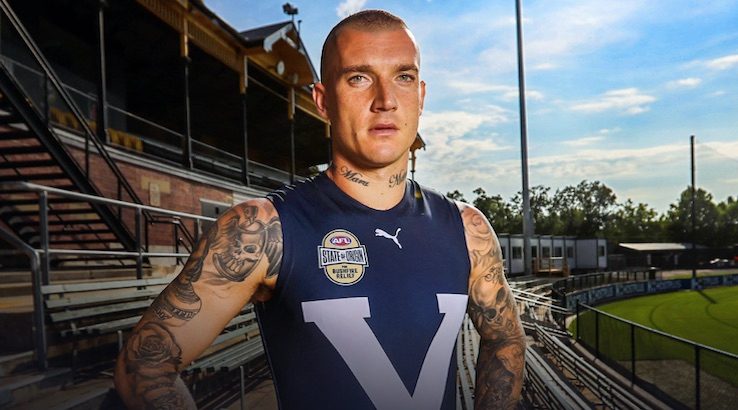 AFL State of Origin for Bushfire Relief is here. A Victorian side will take on the All-Stars in a star-studded clash at Marvel Stadium on Friday night.

Premiership winning coaches Damien Hardwick and John Longmire will lead the Victorian and All-Stars teams respectively in the AFL State of Origin for Bushfire Relief match.

Dustin Martin, Marcus Bontempelli, Scott Pendlebury and Jeremy Cameron are among the All-Australians who will line-up in Victoria's historic "Big V" jumper.

For the All-Stars, Nat Fyfe, Stephen Coniglio, Patrick Cripps and Jack Riewoldt will all take part in a match staged to help raise money to rebuild football facilities affected by the national bushfire crisis that made global headlines over summer.

When is the AFL State of Origin for Bushfire Relief match?

The match will commence at 7:50pm AEDT on Friday 28 February at Melbourne's Marvel Stadium. It will follow the AFLW match between Collingwood and Melbourne at the same ground.

How to watch AFL State of Origin for Bushfire Relief match

This match is being shown on both free-to-air television and on Foxtel. Channels 7mate and 7mate HD are your destination for FTA. While Foxtel iQ, Foxtel Now, Kayo Sports, have the match on the FOX FOOTY channel. AFL Live Pass is your final option. We have put together a full guide to the 2020 AFL season here where you can check out all the viewing options.

With the new AFL season just around the corner, this is a great time to check out Kayo Sports.

The platform has access to all FOX SPORTS channels, including Fox Footy. So that means you can watch every single match of the AFL regular season live, along with replays. It also has all finals matches live, except for the grand final which is shown on delay.

AFL is one of more than 50 sports Kayo Sports has for you to choose from and there is a 14-day free trial.

Kayo also has a number of special features, such as Kayo Minis. With that you can watch a condensed version shortly after matches have finished. SplitView, Interactive Stats and a Key Moments Timeline are other options and more features are being added all the time.

Subscriptions for Kayo Sports are $25/month for the Basic option, where you can watch games on 2 screens or devices. The Premium option is $10 more per month and gives you 3 screens.

The platform is compatible with Android, iOS, Apple TV, Telstra TV, Android TV and Samsung TV (2017 or later), Sony Bravia TVs, Mac and PC as well as Chromecast or AirPlay. We have put together a full review of the service for you.

Who will win the AFL State of Origin for Bushfire Relief match?

This is a charity match so the winner really isn't relevant, but try telling that to Victorians. State of Origin matches used to be one of the absolute jewels of the sport. Players seem to lift whenever they don that famous "Big V" jumper, so for the sake of a tip we'll opt for Victoria by a goal or two.