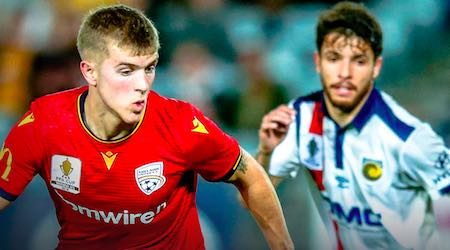 It's Adelaide vs Melbourne City in the 2019 FFA Cup Final. Here's how you can see who will win the silverware.

SUMMARY: You can watch the FFA Cup Final for free using this 14-day trial. This gets you access to all its unique features and 50 additional live sports, including all Hyundai A-League matches live.

The 2019 FFA Cup has been contested by teams since February but will this week finally determine a winner. It'll be Adelaide United and Melbourne City playing it out in the FFA Cup Final for the trophy.

Melbourne City have only ever been here once before back in 2016 when they were also victorious over Sydney FC. To date it's the only trophy that the young club has ever won.

Who will win the FFA Cup Final?

Adelaide vs Melbourne City is sure to be a tightly contested affair. The clubs played as recently as Sunday in the Hyundai A-League, with Melbourne City winning 2-1.

There should be no surprises for Adelaide during Wednesday night's FFA Cup Final. The message from manager Gertjan Verbeek should be simple: mark Jamie Maclaren.

The City and Socceroos striker's boot is currently sizzling. Maclaren grabbed a brace against Adelaide on the weekend. He has scored four goals in his last two appearances for the national side including a hat-trick against Nepal.

His FFA Cup form is just as impressive, netting six goals to lead the entire competition. While he isn't the only talented player for Melbourne City FC he's key to winning the FFA Cup Final.

Adelaide have the benefit of home ground advantage during the match. The Reds are expecting a big turnout at Coopers Stadium with a vocal crowd.

In terms of playing talent, could the Victorians be haunted by two former players in Adelaide skipper Michael Jakobsen and midfielder Riley McGree? The latter scored against City on the weekend.

McGree is just 20 years old but one of the most promising footballers in Australia. He has been a consistent member of the junior Socceroos and last year was called up to the men's squad for the FIFA World Cup qualifiers.

When is the FFA Cup Final?

The FFA Cup Final kicks off at 7:30 AEDT on Wednesday 23 October.

Where is the FFA Cup Final?

How to watch the FFA Cup Final

Here we will provide a brief overview of how to watch the FFA Cup Final. For a more extensive guide on how to watch, see our in-depth FFA Cup viewing guide.

Kayo Sports really is your best option to watch the FFA Cup Final as you can utilise a 14-day free trial. Kayo has over 50 sports to choose from, all A-League matches live and several unique viewing features.

You can watch on PCs/Macs, smartphones and tablets as well as TVs via Telstra TV, Android TV devices, Apple TV or Chromecast. After your free trial has run out, you can continue to watch on Kayo from $25/month.

The FFA Cup Final will be broadcast live on Foxtel's 505 channel. Existing Foxtel subscribers need to be sure that they have a subscription to the Sport pack at $29/month. New subscribers would be best to try out Foxtel Now using the 10-day free trial.

All subscribers can watch on the Foxtel GO app. Otherwise Foxtel Now can be accessed from PCs/Macs, smartphones and tablets, Sony Android TVs, Airplay/Chromecast, PS4, Telstra TV and the Foxtel Now box.

You could stream via the My Football Live App, but you're limited to just a seven-inch screen display. So there's really not much point in paying $16.99/month to be stuck watching on a device no bigger than your phone.