Little Nightmares review: The new indie dying to meat you

Little Nightmares is a beautifully crafted morsel for PlayStation 4, Xbox One and PC owners.

We love a game that does exactly what it says on the tin, and Little Nightmares is as advertised. Just like its obvious inspirations, Limbo and Inside, this diminutive 2.5D platformer has a length that's only little. It's also every bit a nightmare. There's a mob of globulous giants hunting you down here, and they look like they were designed by Jim Henson after decades of hard substance abuse.

Life just isn't going well for you in Little Nightmares. You're “Six” a lilliputian girl in a yellow raincoat who's at large (or rather “at small”) in a land of mutant adult creatures who are running a very sketchy operation Without preamble you're awoken deep in the bowels of this place, alongside shackled orphans and cute little dunce-hatted “nomes” who scurry away from you like rats (until you find and hug them). Everything is left wide open to interpretation. Discovering the bread crumbs of truth in this grimmest of Grimm fairytales proves to be utterly addictive.

The gameplay is a mix of puzzling and physics-heavy platforming, though there's definitely a heavier lean towards using your noodle. Stealth is often your best course of action as you case every new room like a frightened mouse. Six's moveset is limited to leaping, grabbing, dragging, and you have small lighter that can, at best, push back the black a little, and at worst be a lit “all-you-can-eat” sign for any nearby monsters. Hearing the furious guttural shrieks of an alerted pursuer turned our blood to ice water. Every. Single. Time. 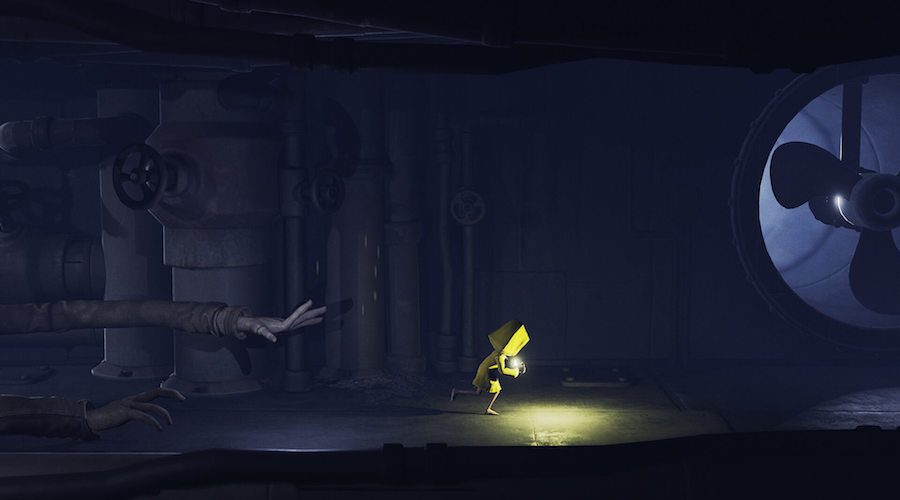 A lot of that tension can be attributed to Tarsier Studios' impressive engine, in particular, its masterful use of lighting. The stygian gloom of the various tunnels and vents are obvious places of dread, but we also challenge you not to be on the edge of your seat when the game places you in centre-stage of a lucidly lit parlour or kitchen. The ordinary simply never is in this purgatory. If the sudden appearance of new responder freaks doesn't shatter your intermission of normalcy, a sly camera pan to a recent suicide victim, or some other past atrocity, probably will.

The very nature and purpose of your oddly lilting prison are a constantly shifting canvas, too. Just when you think you've got a handle on it, a new architectural revelation -- which, more often than not, will border on the Salvador Dali surreal -- will make you re-evaluate your place in this mad, mad world. There are five distinctly themed chapters that keep the backdrops and challenges fresh and interesting. The dangers and tension only ever escalate the further you go down this rabbit hole. 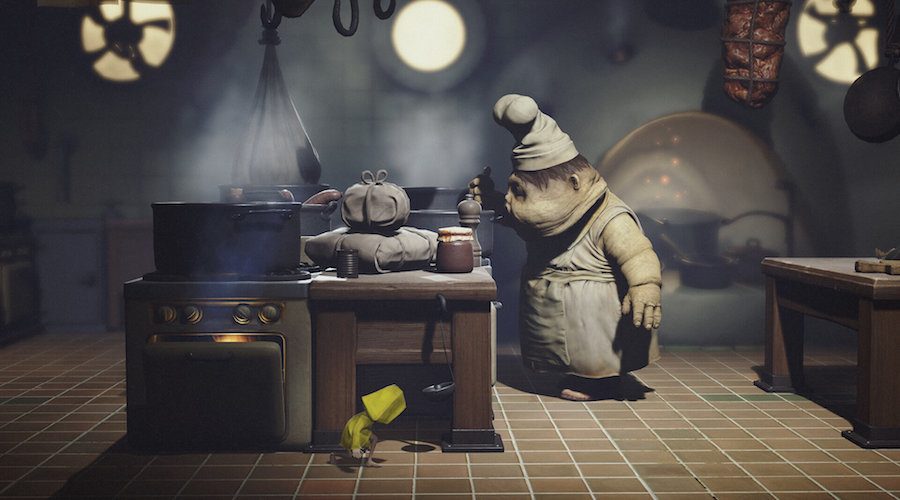 This game proved to be impossible to put down for us. The only frustrations we had with it was with one or two obtuse puzzle moments, and the odd control mishap when a wide camera pan caused us to walk to our death. There is also a concern about length: one could speed run this in two hours plus change if they knew what they were doing. If you're not the lateral-thinking type who boycotts online walkthroughs, however, you could feasibly stretch that out to three hours. An additional half an hour could get tacked on if you're a completionist looking for the collectible lanterns and nomes secreted about the place.

Little Nightmares is a lovingly-crafted experience that will haunt you long after its credits have rolled, and as such is well within striking distance of the superlative Limbo and Inside. All that being said, thirty bucks for three hours of content is a bit too rich for our tastes. We recommend you wait and watch this nervously from the shadows until a PS Plus discount arrives, then scurry in for the kill.

We reviewed Little Nightmares on PC with a copy provided by the publisher.

A meal-priced snack that's worth gobbling up when discount season rolls around. Not quite as thought-provoking as Limbo or Inside, but definitely approaching the same calibre of craftsmanship.

Available for PS4 Xbox One Switch

Bulletstorm Full Clip Edition Review: A second chance for this skillful shooter Blaster Master Zero review: Blast from the past

Benji Marshall plays his final match as a Tiger against an Eels side looking to guarantee its top-four place.

The best gin in Australia for 2020

Treat your taste buds with our roundup of the best gins in Australia.

Everything you need to know about Amazon's new Echo smart home range.

How much does teeth whitening cost?

Whiten teeth from as little as $5 at home or from $300 professionally.