There are nefarious and non-nefarious ways of analysing UTXOs. Dusting attacks are the former.

A dusting attack involves sprinkling cryptocurrency wallets with a light dusting of tiny amounts of free money as part of an effort to identify the owners and connect multiple wallets. The definition of dust in cryptocurrency is an amount of crypto that's below the transaction fee needed to send it.

"After dusting multiple addresses, the next step of a dusting attack involves a combined analysis of those various addresses in an attempt to identify which ones belong to the same wallet," Binance explains. "The goal is to eventually be able to link the dusted addresses and wallets to their respective companies or individuals. If successful, the attackers may use this knowledge against their targets, either through elaborate phishing attacks or cyber-extortion threats."

How does dusting let you de-anonymise wallets?

But the blockchain is public anyway, right? So what do attackers get from all this dust that they can't get from just looking at the blockchain? The answer has to do with the unspent transaction outputs (UTXO) system used by Bitcoin, Litecoin and others.

This system is basically how the Bitcoin blockchain "thinks about" the money in its network and builds a complete transaction history for every coin in existence.

At any given time, all the money in your wallet is an unspent transaction output. It's in your wallet because it hasn't been spent yet – hence the name. When you add up every UTXO in existence, you're just adding up all the wallet balances in existence.

Your UTXOs and your wallet balance will always be the same amount, but they aren't the same thing.

This is because most Bitcoin (and Litecoin and other) wallets work by allowing you to generate an almost limitless amount of new addresses for each transaction, all through a single easy wallet interface and a single seed phrase. The Bitcoin whitepaper gives a nod to this, by specifically saying: "as an additional firewall, a new key pair should be used for each transaction to keep them from being linked to a common owner."

This is what the now-standard "hierarchical deterministic wallet" is. It's a wallet that generates new addresses for each transaction to better protect your privacy.

Essentially, an attacker will sprinkle that dust over a bunch of different wallets, and then watch that dust to see how much of it gets swept up into the same transaction. If it does, the attacker can conclude that the same person owns all of those addresses.

Basically, outgoing transactions destroy UTXOs, and then create new ones on the receiver's end. This means there are also some non-nefarious things you can do by analysing UTXOs, which can present interesting insights. 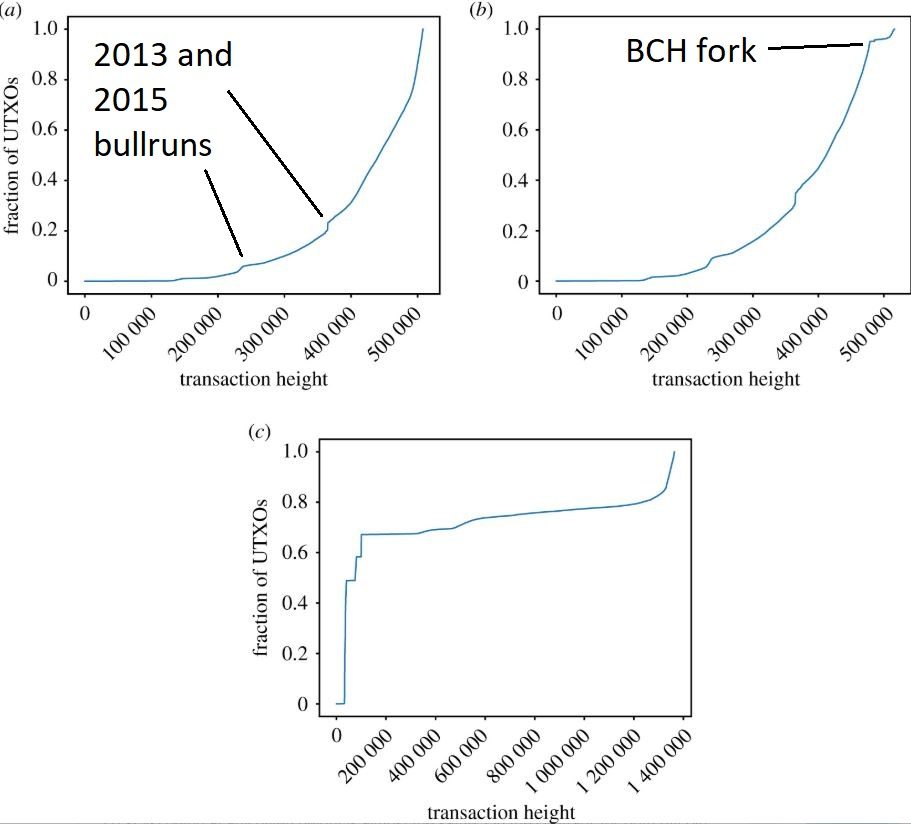 We can observe a few interesting things from this, and jump to a few conclusions.

The following are some observations we can make from the data:

Based on that, we can jump to the following conclusions:

This might be true once again, with Litecoin creator Charlie Lee recently conceding that "the honest truth is that no one is interested in working on Litecoin protocol development work".

Of course, you have to be cautious with it given how many factors play into UTXO count.

For example, the more expensive a coin is the more UTXOs will be created for the same fiat currency transaction size. There are also a lot of different ways wallets handle UTXOs, and depending on which wallet is most popular, you might get different outcomes:

And then you have factors such as dust attacks, which very specifically result in the creation of countless new UTXOs.