Linksys WRT32X gaming router review: Takes up space, but seizes all the bandwidth

The huge Linksys WRT32X represents a better experience for serious gamers and a palpable edge for esports aficionados.

Finding a dedicated gaming router that deals in quantifiable player benefit, versus buzzwords and aggressive physical aesthetics, is harder than you think. The Linksys WRT32X Gaming Router certainly dabbles in the latter, what with its “Killer” engine, and the fact that it looks like a 2/3 sized spaceship miniature stolen from a Star Wars set. Be that as it may, it also delivers a bunch of incredibly useful and experience-enhancing features.

Engineered “for victory” and built solely with gamers in mind, the WRT32X did indeed provide me smooth, lag-free gaming over many hours of testing. When compared to the experience offered by my office's bog-standard, telco-provided broadband/router, I regularly felt like I had gained an advantage over other players. In MOBAs, shooters, or any other genre where milliseconds can be the difference between a chicken dinner or a merciless teabagging, the WRT32X has the potential to have you better fed with fowl.

All of the bandwidth

Having a 1.8 GHz dual-core CPU promoting simultaneous high-speed data processing is always nice, but one of the most impressive features here is the Killer prioritisation engine that can reduce your peak ping by up to 77%. Essentially, Killer tells the router to hold all of your gaming network traffic up on a pedestal – to fast-track it above everything else – providing you have a compatible gaming rig. (I'd be surprised if any serious gamer wouldn't be, as most dedicated Gigabyte, Alienware, MSI or Razer PCs will auto-sync with it).

Killer is fantastic to have if, like me, you're forced to share your bandwidth with a household of megabit-leeching children, or a significant other who insists on consuming trashy television as you're trying to rack up online kills. For best results, I'd recommend you tell none of your dependants about this feature. When they complain loudly about having slow Internet, throw out a few fake moans in there yourself. Blame the service provider, too. It's the perfect crime.

Tinkering with the features of WRT32X is a cinch, thanks to a browser-based interface that's straightforward yet powerful. You can easily monitor all currently connected devices (and boot off moochers), tweak advanced network settings and run the usual speed tests. Tinkerers may also check VPN and storage statuses, analyse feedback from their Killer-enabled device and set up some good old fashioned port-forwarding. This suite is well-designed and I imagine troubleshooting would be a much simpler process than any other router I've ever used.

Personally, I haven't had any problems with the regular firmware drops Linksys has made since the start of 2018. Mind you, I would be remiss not to mention an incident in November of 2017, when a firmware roll-out seriously degraded the 2.4 GHz capabilities for a month or so. To be fair, that was an isolated incident that's been ironed out completely.

Linksys tries pretty hard to pitch the WRT32X as a “stealthy design”, but I beg to differ. Not only is it “designed to dominate” in the competitive online gaming space, this unit will dominate most of whatever flat surface you place it on. This sucker is huge – a whopping 24cm x 19cm x 5cm (and that height shoots up to 15cm when you have the four attachable antennae fully erect). Amusingly, I had non-tech-literate people wandering past my desk, asking “how that new drone is”. A confusing conversation would then begin over why I chose to detach its rotors.

LED-wise you'll be winked at by the neon blue status indicators that sit on the front of the unit. Pretty much everything gets its very own traffic light: power, Internet, 2.4 GHz, 5 GHz, eSATA, the USB ports and LAN connections 1 through 4. All in all, I think this big bertha won't win any beauty pageants, but it is definitely much more pleasing to the eye when compared to its predecessor, the blue-turtleneck-wearing WRT-1900AC. 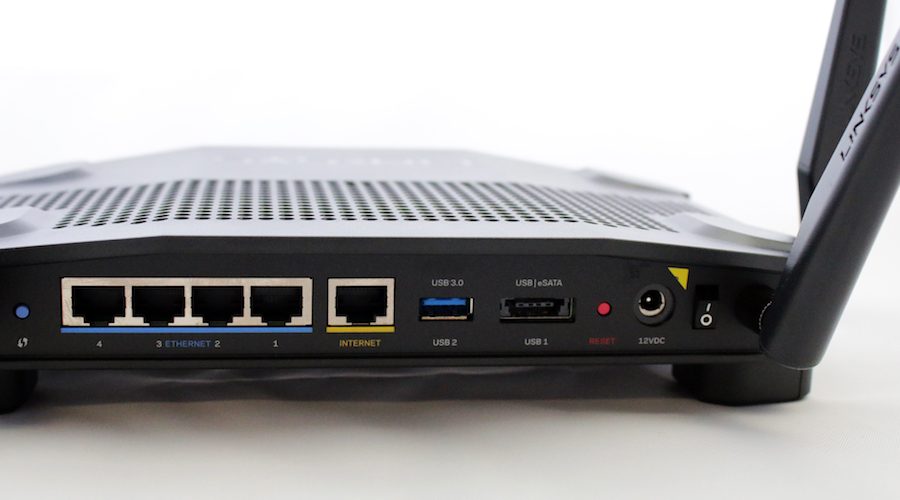 Oddly, the sizeable derriere of the WTR32X only offers four Gigabit ethernet ports. Being an old-school LAN guy, I wanted at least six of them. However, the ones I got did deliver high-speed connectivity for all my wired devices. Other interesting extras included are the eSATA port, which offered extra convenience and accommodated one of my older USB 2.0 hard drives. There's also a USB 3.0 port for folks who want to add external storage to their network, or easily share files across it. It's a welcome feature to have and supports FAT, NTFS or HFS+ formats.

For those of you who rightfully shun cables, the WRT32X offers MU-MIMO – the latest wireless-AC technology for simultaneously streaming and gaming on multiple devices. What's this when it's at home? MU-MIMO is broadcasting technology that uses a bunch of algorithms and coding tricks to deliver bandwidth fairly between devices. If you have multiple gaming rigs trying to talk to the Wi-Fi at the same time, this feature will essentially keep everybody on a more even keel.

I found that the optimal coverage and maximum signal strength (across simultaneous dual-band, 2.4 + 5 GHz) was consistently achieved – even in an inner-city, multi-story building. Theoretically speaking, the most one could pump out of the WRT32X would be an impressive 2600Mbps on the 5GHz 802.11ac network and 600Mbps on its 2.4GHz 802.11n network.

I should also mention that this router has a Dynamic Frequency Selection (DFS) certification by the FCC which allows Wi-Fi devices to use the 5 GHz channels (which are typically reserved for public safety radar systems). In layman's terms, that means the WRT32X can operate in the clearest airspace possible that many other routers aren't allowed into. After thorough testing, I'm happy to say that the Linksys WRT32X didn't skip a beat in the heat of online battle, even after I asked a small army of local minions to connect their devices and try to DDoS my bandwidth. Linksys's asking price may be steep, and its unit gargantuan, but this router absolutely represents a better experience for serious gamers and a palpable edge for esports aficionados.