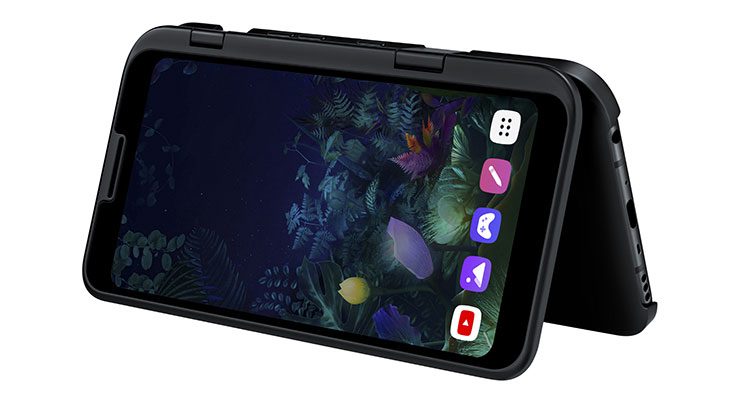 LG's first dual-screen 5G phone will be a Telstra exclusive.

LG has announced that the LG V50 ThinQ 5G will be available on contract terms or outright exclusively through Telstra in Australia from 11 June 2019.

The LG V50 ThinQ was first shown off at MWC 2019, where its headline feature was an optional "second screen" display.

It's a play that's ostensibly similar to the folding display phones that we're still waiting on from the likes of Samsung and Huawei, but with the difference that it's a clip-on screen, rather than inherently part of the display. At MWC 2019 it wasn't entirely clear if the second screen would be an optional extra purchase option, but here in Australia, it will ship through Telstra as standard with the LG V50 ThinQ 5G itself.

As the name suggests, it's a 5G-capable handset, joining the likes of the already available Samsung Galaxy S10 5G, and the Oppo Reno 5G in Telstra's array of 5G handsets. At the launch of the LG V50 ThinQ, an LG representative showed off its speed prowess, where it hit 1.2Gbps downstream. That's very much in line with the speeds we've seen from the Galaxy S10 5G, a little slower than the Oppo Reno 5G, but as always, mobile speeds can be quite variable.

In other words, you won't see those speeds all the time, especially given the relative paucity of 5G sites across Australia right now. 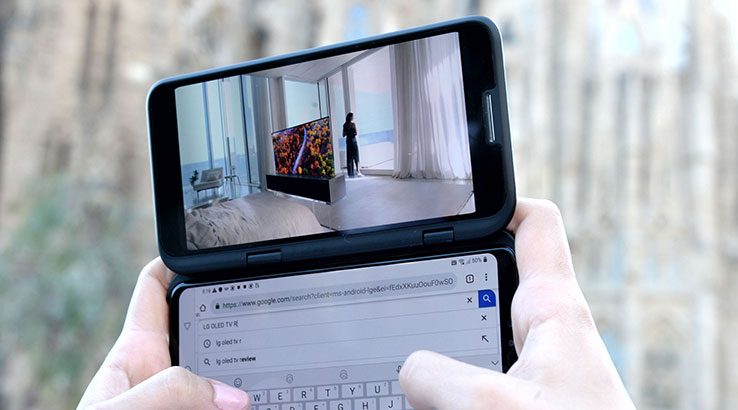 The LG V50 ThinQ 5G is a solidly packed smartphone too. Aside from its dual 6.4 inch and 6.2 inch OLED displays, it's rocking a Snapdragon 855 processor, 6GB of RAM and 128GB of onboard storage, expandable via MicroSD cards.

The dual screen supports individual app instances on each screen, so it's possible to run multiple apps without compromising the display size of either. LG is also pointing out its gaming prowess, with the claim that Bluetooth controller-compatible games can utilise one screen as a dedicated touch controller. There's also the option to use the secondary screen as an enlarged keyboard if you find standard phone keyboards too cramped.

The first run of 5G phones was always going to be costly devices, and the LG V50 ThinQ 5G is no exception. The LG V50 ThinQ 5G will be available in Australia from 11 June 2019 for an outright price of $1,728, or on contract terms through Telstra.

Here's how much you'll pay on contract terms with Telstra. All plans include unlimited standard calls and texts, as well as the option for Telstra's Peace of Mind unlimited data offer, either as a bolt-on cost or included for the $129 tier. The $199 tier includes unlimited data as fast as the LG V50 ThinQ can pull it down from Telstra.

The pricing of the LG V50 ThinQ leaves the Oppo Reno 5G as the cheapest option in the 5G space currently at $1,499 outright. That's a phone you'll also be able to buy from 11 June 2019. The Samsung Galaxy S10 5G is available now, but there's no sign of outright pricing, and its Telstra plan pricing puts its handset repayment cost at just under $2,000.