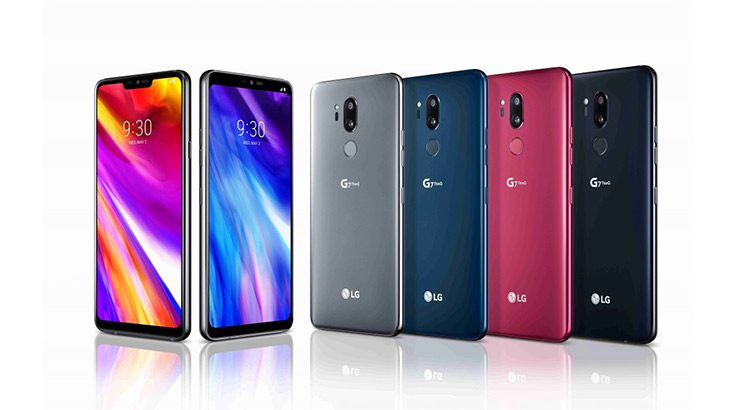 LG's latest premium handset sells itself on its AI smarts, as well as some seriously high-end specifications.

LG made formal one of its least secret phones overnight with a launch in New York of the LG G7 ThinQ. As expected, it's packing Qualcomm's Snapdragon 845 processor behind a 6.1 inch QHD+ FullVision LCD display with a notch that can either be present, hidden by a deliberately black bar or styled in several fashions.

LG has opted for an LCD display, a departure from the Plastic OLED (P-OLED) display used for both the LG V30/V30+ and the LG-produced Google Pixel 2 XL. The LG G7 ThinQ has a screen resolution of 3120 x 1440 with a 19.5:9 aspect ratio and very little in the way of bezels to be seen.

Also as rumoured, there's a side "assistant" button, utilising Google Assistant for queries with a single press. A double press of the button will instead bring up Google Lens for image identification, which could get all kinds of interesting results if you accidentally tap it twice while it's in your pocket.

Unlike its Pixel 2 XL, there's support for microSD expansion up to 2TB, alongside either 64GB or 128GB of storage. Those storage variants also determine the internal RAM, with either 4GB or 6GB of memory to play with.

The LG G7 ThinQ is yet another "ThinQ" product, that being LG's term for its AI aspirations announced at CES 2018 back in January.

In the case of the LG G7 ThinQ, it's all about the camera app, with 19 AI-assisted shooting modes to determine optimal photo shooting parameters, similar to the efforts in the existing Huawei Mate 10 series, or the upcoming Huawei P20 Pro.

Speaking of the camera, at the front there's an 8MP f/1.9 wide angle sensor, so you can more easily capture group selfies, while at the rear, LG packs in two 16MP sensors, one at f/1.9 and one at f/1.7.

LG has also put some serious work into the audio, with an onboard 32-bit Quad DAC for the hi-fi enthusiasts, as well as what it's calling a "Boombox" speaker system that uses the internal body cavity of the LG G7 ThinQ to deliver a louder and clearer sound when pummelling others with your musical tastes.

Charging is via either USB C or Qi Wireless to a 3000mAh battery, and it's rated at IP68 for water resistance.

LG has indicated that the LG G7 ThinQ will launch in Australia in June through JB Hi-Fi and selected retailers, which makes it seem highly likely that we won't see it placed with any carriers.

There's also not that much indicative information about pricing from overseas carriers, although it's expected to be offered at least in the US and South Korea, so if you're keen on LG's handsets generally, an import model may be your best bet for an early pickup.