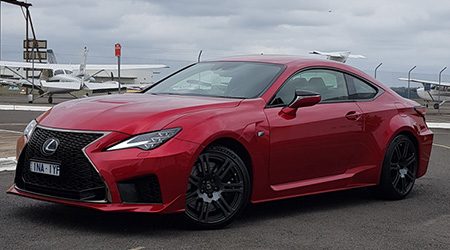 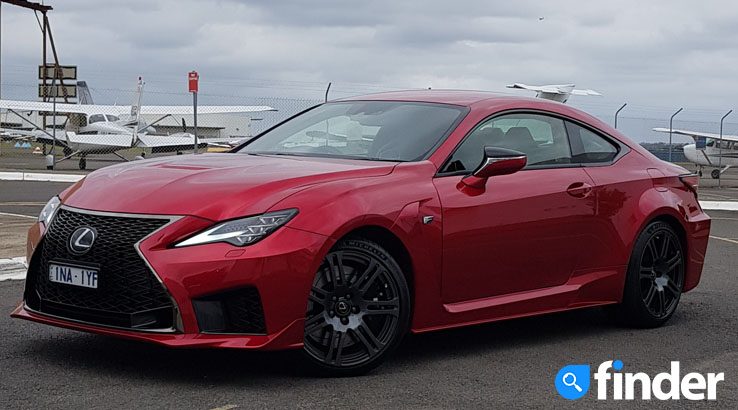 The Lexus RC F has had a slight facelift but retains its distinctive presence. As we drove and used our test vehicle around Sydney, people genuinely stopped to take photos of it as it was stopped in car parks.

However, have the refinements compromised performance and for a price tag of $134,129, could you drive it everyday?

We got behind the wheel to find out.

Visually, what has changed on the Lexus RC F?

The upgraded Lexus RC F receives a number of exterior changes, not only to improve the aesthetic, but to further enhance the driving dynamic of this two-door beast.

Single-piece high-grade LED headlights and the signature Lexus spindle grille have been widened, incorporating an L-shaped mesh pattern to help pretty things up and give the vehicle a lower and even more aggressive stance.

The size of the front-side breathers has been increased and new canard "fins" have been added to help the flow of air out of the wheel housings, with the fins improving stability of the vehicle.

At the back, the redesigned quad exhausts add to the aggressive styling, improve the engine note and also reduce vehicle weight by 7kgs.

Redesigning the rear-diffuser was also on the to-do list for the boffins at Lexus, with the inclusion of vertical fins again assisting with aerodynamics and grip.

The candy red on our test car looked fantastic, too. Dubbed "infrared" by the design team at Lexus, it would have to be up there as far as colour choice in my books, coupled with the black rims. 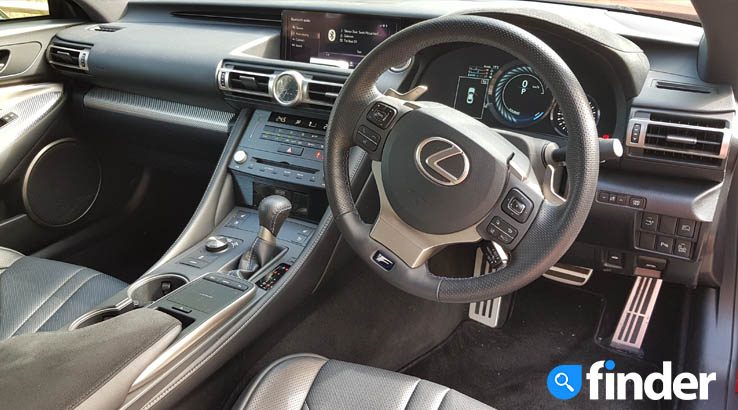 The Lexus RC F we had to review was optioned with black semi-aniline leather complemented with glass-fibre accents throughout. And of course there was all the F branding you could ever need too.

Driver and passenger are treated to quite comfortable sports seats with a good amount of lateral support. These seats are also heated and ventilated.

The rear pew is better described as a storage area as realistically no one can fit there.

As the system isn't touchscreen, Lexus has fallen back on its trackpad system, which we've spoken about several times before. Was it any better this time though? We found out when we got it on the road.

You get a bench behind the driver and passenger seat which is great for storing cargo. In other cars, this is called a backseat, but there is no way anyone could fit back there in the RC F.

The 366L of storage space in the boot is adequate enough for a car of this nature, though you will find m

ore room in the back of, say, a Ford Mustang.

It also enjoys a drink, with our time with the car producing an average fuel consumption of 13.9L per 100kms. With that being said, if you're buying a 5.0L V8, this probably isn't going to be a massive surprise nor concern.

There is no spare tyre either, with Lexus providing a tyre repair kit instead.

Practicality isn't the driving factor when purchasing a two-door V8 though.

Climbing into the cabin, hitting start and listening to the 5.0L V8 rumble to life, you immediately get the feeling the Lexus RC F is a bit special.

As I pulled out for my first drive, I immediately noticed the vehicle is very compliant and well behaved. From steering to accelerating at low speeds, it doesn't have you on edge as though it is going to all of a sudden take off from under you.

To get the RC F back, we had to take a trip down the M5, where something else becomes rather apparent. The suspension set-up is well sorted too. Could it be used as a daily driver? I'd say yes, as long as you don't need to carry more than two people. Suspension wasn't overly stiff as you may have expected from a two-door weapon and on rougher surfaces, the RC F did quite a good job of moving you forward in relative comfort.

The burble from the quad-exhaust is also addictive. Not just thanks to the titanium pipes, but the naturally aspirated 5.0L powerplant sitting under that bulging hood. As with the GS F and LC 500, Lexus has opted against following the crowd down the path of forced induction and for that I have to thank it, again. It may not have the straight line figures of a Mercedes-Benz C63 S, but it is still a fantastic decision by the company, in my opinion.

Despite lacking the 0–100 numbers of competitors, it still has enough get up and go for any roadgoing situation and then some, with the 5.0L lump producing 351kW and 530Nm. Power is routed to the rear wheels via an eight-speed sports direct shift automatic gearbox. It is also the first time that this particular engine has been Euro 6 emissions compliant.

In our 2020 RX review, we noted that Lexus has started listening to feedback and updated the infotainment system to include a touchscreen display, which was accompanied by its usual trackpad method of interaction.

As mentioned earlier in the review, there is no touchscreen in this, but an upgraded trackpad now has haptic feedback and it seemed as though cursor speed had been slowed down. The pointer didn't seem to miss the mark as much and wasn't as fiddly to use. That being said, as a whole, the system is difficult to use, but hopefully the next iteration will include an easier method of interaction.

Another thing that I found interesting, and this may just be for me, was the dual-zone climate control inputs, where instead of turning a dial, you slide your finger up or down a metal strip in order to raise or lower the temperature. It's a bit of a novelty, but there is no escaping that the layout of the cabin controls is starting to show its age.

Travelling around Sydney we found the cabin to be well insulated, though you can still hear the V8 rumbling along, which is a positive for me. Should you, for some reason, not want to hear that noise, there is a 17-speaker Mark Levinson audio system.

How safe is the Lexus RC F?

As always, Lexus includes the Lexus Safety System+ on the RC F. This means that along with eight airbags, overall the vehicle features technology such as:

Lexus built its brand in Australia off the back of market-leading customer care. Currently, the brand offers a 4-year 100,000km warranty. Included is a one-way taxi fare up to $150 should your Lexus leave you stranded roadside, as well as 24/7 roadside assistance, among other features of the Lexus DriveCar program.

Servicing is done in increments of 12 months or 15,000kms, whichever should come first. 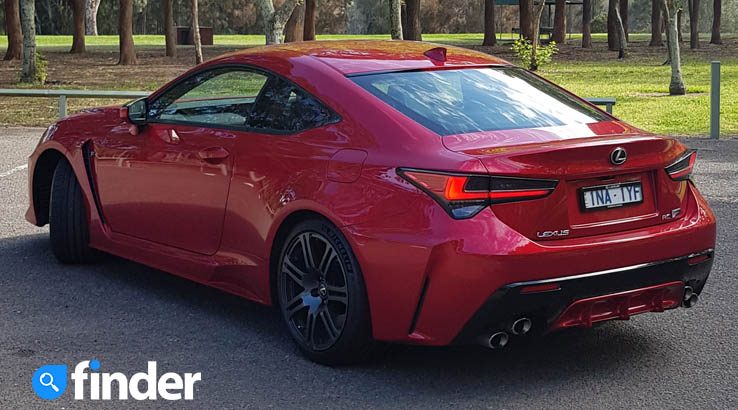 The Lexus RC F feels special. Sure it might be slightly dated inside and lack the performance figures of its German counterparts, but it also doesn't command the same price tag. In terms of value for money, Lexus makes a strong case for you to opt for its offering.

If you aren't carting several people around regularly, it would easily be a daily driver too. Should that not be the case though, you may want to look at an option with a bit more leg room in the back or another set of doors. The Lexus GS F springs to mind, featuring the same powerplant.