Quick Verdict: Lenovo’s latest laptop certainly lives up to its slim name, although its battery life isn’t quite as impressive as it could be.

The Lenovo Yoga Slim 7i Carbon is Lenovo's latest take on a slim and very light business laptop. Light is the name of the game here, from its brilliant white carbon fibre finish to its ultra-light carrying weight of 966 grams. That's tablet territory, and while it feels light in the hand, it's nicely equipped with 11th Gen Intel processors to give it plenty of power too. 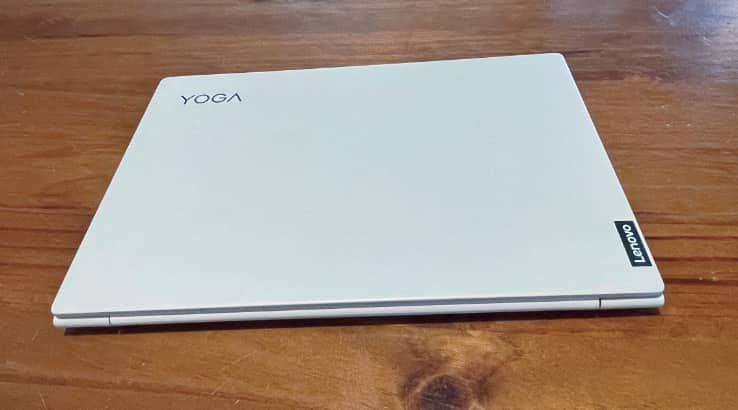 When closed, the Yoga Slim 7i Carbon looks much like any other white laptop you might have seen before. It features a silver Yoga logo on the top left and a smaller Lenovo badge on the bottom right of the top casing, which means vendor logos are minimal if you like that style.

Pick it up, and you quickly start to appreciate one of its selling points. At 966 grams, the Yoga Slim 7i Carbon really is quite slim, up there with the rest of the sub-1kg crew from competing vendors.

At a certain point the claims around the "world's lightest" just becomes engineering talk, because you're not going to pick the difference between a 966g laptop and a 970g laptop without some scales to hand, after all. Still, if you want an incredibly light laptop, you've come to the right place.

Open the Yoga Slim 7i Carbon up, and you're greeted with a standard keyboard and trackpad, sitting beneath a 13.3-inch QHD (2560x1600) LCD display with 300 nit brightness and claimed 100% sRGB coverage. There's not a whole lot of space given over to bezels, but that's a very common feature of these super-light business laptops in general.

The keyboard is reasonable in use, although the very light construction does mean it's a little more bouncy than you'd get on a heavier laptop. There's simply less rigid weight to resist your keystrokes, and that's the tradeoff for the Yoga Slim 7i Carbon's light weight.

The slender nature of the Yoga Slim 7i Carbon also limits the ports available to you, although Lenovo has done a fair job here relative to some laptops we've tested in the past. The Yoga Slim 7i Carbon features two Thunderbolt 4 ports on the left hand side, one USB 3.2 Type-C Gen 2 port on the right and a combination 3.5mm headphone/microphone jack. If you're charging the Yoga Slim 7i Carbon, you'll have to sacrifice a single port, but it's still reasonably flexible for most peripheral uses. 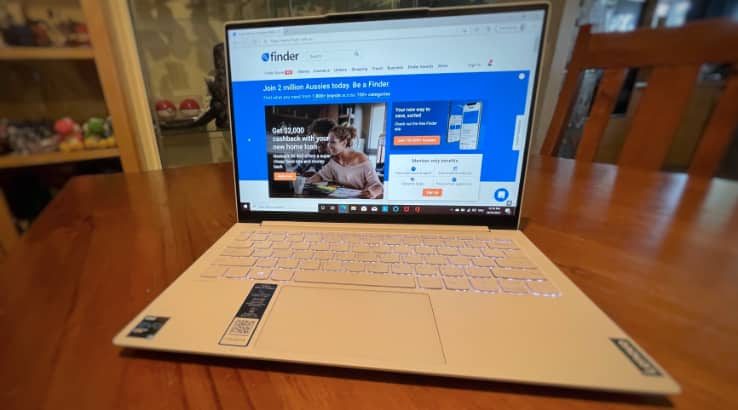 The review model supplied was the lower-tier Core i5 variant with just 8GB of RAM, so you could expect even better performance from the more expensive Core i7 version.

In benchmark terms, the Yoga Slim 7i Carbon performed very nicely across a suite of popular benchmarks for regular app performance. It wasn't quite as nippy for graphics benchmarks, but that's down to the integrated Intel Xe graphics onboard. Intel's own integrated GPUs have certainly come a long way, but if you wanted the Yoga Slim 7i Carbon for heavy duty graphics rendering work, you might still find you're left wanting by it.

Here's how the Yoga Slim 7i Carbon compares across a range of benchmarks:

The Yoga Slim 7i Carbon qualifies as an Intel Evo laptop, which means that it's using an Intel processor (duh), but also that it's capable of instantly waking from suspension, fast charging and Wi-Fi 6 connectivity.

While there's a certain quantity of marketing fluff to the Intel Evo name, those are useful features for business users to have within their laptops, and the combination of those features with its light carrying weight would make it a solid match for workers who need to move around meeting rooms all the time.

There's decent scope for the Yoga Slim 7i Carbon to be a good inflight laptop as well. Although fairly obviously, I couldn't test that out during the review period due to the pandemic restraining international travel. 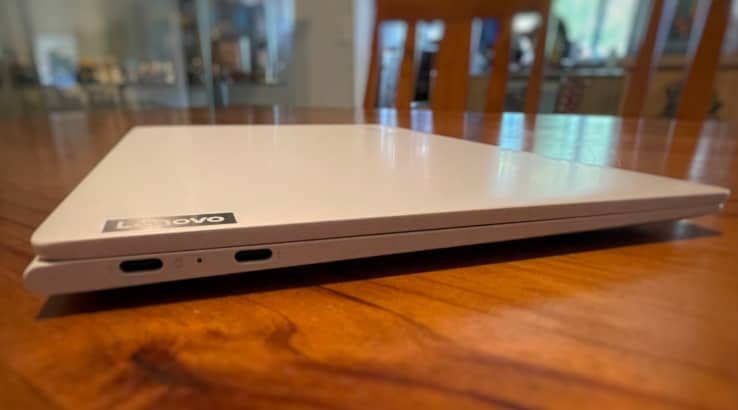 Lenovo's claim for the Yoga Slim 7i Carbon is that its 50Wh battery is good for up to 13 hours of usage, and up to 15 hours of 1080p playback. Vendor claims around battery life always tend to steer towards the best case scenarios – which makes sense, because if you want to sell laptops, you're not going to point out their worst features, are you?

Still, it's always useful to test how a laptop performs in real-world usage scenarios. To test battery life, we put the Yoga Slim 7i Carbon through PCMark's Gaming Battery test, as well as looping a Full HD video at maximum brightness and moderate volume from a fully charged battery to exhaustion with all battery saving measures disabled. The Yoga Slim 7i Carbon isn't a gaming laptop, but that test gives it a brutal test to give a possible worst case scenario, while the video test shows more moderate performance timing.

Here's how the Yoga Slim 7i Carbon compared against a range of slim business laptop choices:

The Yoga Slim 7i Carbon didn't quite reach the marks that Lenovo wants to claim for it, although it's worth noting that its own video playback probably left the brightness less intense than we set it at. At a more anecdotal level, the Yoga Slim 7i Carbon can manage reasonable battery life in a work environment, and the fact that it charges off a USB C connection means that its charger is nice and small, and it's easy to get it charging when you need to, as long as there's a socket nearby to do so.

Should you buy the Lenovo Yoga Slim 7i Carbon?

The Yoga Slim 7i Carbon is a very nice laptop that for the most part hits its aims for the business user. Above all it's thin and light, and if that's your core criteria then it's well worth considering in the pack of ultralight laptops available to you. Its overall app performance is very good within its category, and it's also got a nicely distinct style away from the vast pack of aluminium ultrabooks that essentially mimic Apple's style.

However, it's not a great match for business users who do a lot of graphics work, or anyone who needs really long-term battery life away from a charger, because there it compares a little less favourably.

You've also got quite a few choices in the sub-1kg category, including the Dynabook Portégé X30W-J, LG Gram 13 or the HP Elite DragonFly to name but a few.