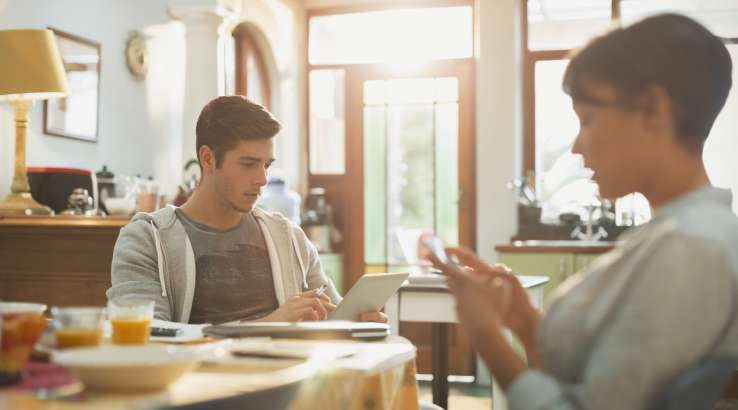 Many local fintechs are confident open banking will help them compete with the banks, but others aren't as convinced.

Open banking is set to be a game changer for Australia's fintech industry which, once given permission to do so by the consumer, can use the data held by their bank to offer more personalised, tailored products and services. Basically, it'll put Australians in charge of their own banking data so that if they want to share it with a finance app, they can do so easily and securely.

Finder spoke with founder of popular micro-investment app Raiz (formerly Acorns) George Lucas as well as founder of online peer-to-peer loans provider MoneyPlace Stuart Stoyan about their view on the implementation of open banking and why they believe it will, or will not, work.

Concerns about the consumer-consent process

Currently, most fintech services rely on a process called screen scraping to access a user's data. Like the name suggests, this involves an app scanning a user's transaction history. This process is legal, but it does rely on a user handing over their Internet banking details and having trust in the app or service that it'll keep their data safe. Both Raiz and MoneyPlace, along with the majority of fintechs, rely on screen scraping for their products to function.

Open banking formalises this process and ensures the data is shared from a user's bank account to the fintech in a secure way. However, under the current legislation, it's likely that users will need to re-consent for their data to continue to be shared with the fintech every 12 months. It's this re-consent process that Lucas is most concerned about.

"Under the current proposal, open banking is not user friendly due to the consent process and the need for users to re-consent regularly. Users will find that data from their banks will stop being supplied to products like Raiz or Pocketbook, not because of technical problems but because they didn't re-consent. If, like many users, they have opted out of emails and SMS notifications, they will not be able to be notified that they need to re-consent and as a result, users will blame the specific app, rather than the rules associated with open banking itself," said Lucas.

Stoyan agrees that the consent process needs to be user friendly and seamless for open banking to work. "What we need is a consent process that is straight minded and efficient. If it's too painful for the customer, they're going to drop out," he said.

However, Stoyan disagrees that having to re-consent every 12 months will deter consumers. "Having to re-consent to your data being shared every 12 months is reasonably consistent with most of the other principles we have now around provision of financial advice and ensuring customers remain aware of where their information is going. If I'm not engaged with the platform or app I might forget that my data is still going there, so it probably is useful that I say 'yes I want to share my data with this app' every 12 months," he said.

Will open banking benefit the big banks more than fintechs?

Lucas says despite all the hype around open banking being a good thing for the fintech sector, it'll actually just give the big banks even more of a competitive advantage. "Once again, the government will have created an unfair environment favouring the large banks as if the royal commission into banks never happened," he said.

"Open banking fails to create a level playing field. Banks will be able to use the transaction data they collect and market to customers without the same consent and re-consent process that fintechs, who access data from open banking, will need. We will also need to wait to see the compliance burden required by the small fintech players to be able to access data from open banking. At the moment, it is not envisaged that there will be any extra compliance burden for the banks," said Lucas.

Stoyan agrees open banking will help the banks, but he says it's equally an opportunity for fintechs. He said it's more of a case of the best product winning the customer, which is an opportunity for all players. "I think it definitely benefits fintechs, it makes our proposition easier to be able to put to customers. The hardest thing we have is convincing someone that we're a better deal. By being able to access that data, for an average loan size of about $20,000 we'll be able to save the borrower about $5,600 versus a loan from a bank. That's pretty meaningful for most people," he said.

"But equally, it actually benefits banks. I get frustrated when I hear the banks talking about this just being for fintechs so that we can come and steal all their customers. No, what this actually is about is saying how do we give the customer the best proposition possible. If you've got the best proposition, then you'll win and keep your customers," said Stoyan.

Stoyan believes the best innovation will come later when energy and telecommunication data is included in open banking. "I think the best uses haven't even been thought about yet. What is really exciting is when the data becomes available for tech and utilities. If you were to jump forward five years wouldn't it be great if you could say, 'Hey Siri, is it worth me getting solar panels on my house?' and the bot can access your data to pull your energy usage, how the sun shines in your area and calculate the potential savings for you," he said.

Lucas agrees that the best innovation will come later down the track because the current process of screen scraping already works in a similar way to the first stage of the regime.

"For banking alone, the current technology can achieve what the first stages of open banking will deliver. We may see more innovation when energy and telephone data is included into the data set, but that is still probably a couple of years away. Open banking is mainly seen by the large banks as a way to assist with their compliance burdens associated with responsible lending, not as providing innovation into the Australian market," said Lucas.