LaMelo Ball gets his first ever triple-double in the NBL 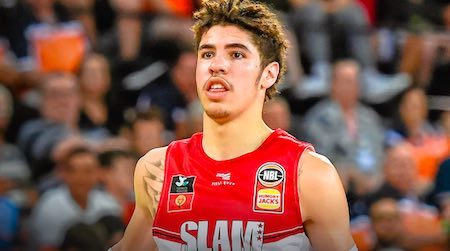 NBL Next Star and 2020 NBA Draft prospect has recorded a 30-point triple-double.

LaMelo Ball is on one right now. The teenager has had a career night, netting his first ever triple-double as the Illawarra Hawks defeated the Cairns Taipans in overtime at Wollongong.

The Cairns Taipans had no answer for the young guard as he put up numbers of 32 points, 13 assists and 11 rebounds. This was Ball's highest scoring game in the NBL so far and his most impressive.

Maybe the most notable statistic was just the one turnover, which is pretty remarkable when you consider the high usage rate.

Ball was clutch down the stretch too. Down 99-96 with 8 seconds to go, Ball showed he belongs in the big moments as he drained a three-pointer and sent the game to OT. In OT he added four points including a dunk to cap off his big night.

Ball began the season with a rusty three-point stroke but has since turned it around. Tonight he dropped in 4 three-pointers on 7 attempts and hit 11 of 20 shots overall. At the charity stripe he went six for eight.

After being criticised over his shot selection ever since he was in high school, those questions came again when import Aaron Brooks tore his achilles. But Ball proved the doubters wrong immediately, improving his scoring output on a thin Hawks team.

There were very few growing pains for Ball as he's shown he can be the primary option while maintaining efficiency. Illawarra might have not had much success so far this season as all three victories have come at the expense of Cairns.

If you missed the game and want to witness Ball's historic night you can watch on demand with Kayo Sports. Use this 14-day free trial and watch now.

After flying up draft boards ever since he began playing in the NBL, it's Ball's play in the last few weeks that has heads turning even more.

Could Ball be the next Luka Doncic? Ball, like Doncic has gone the different route of competing in an overseas league rather than the NCAA. It's not the only similarity between the two as they both play as oversized 6'7" point guards with elite playmaking skills.

It's not only the public keeping a watchful eye over the 2020 NBA draft prospect. Present at Monday night's game was former Lakers general manager and now Hornets GM Mitch Kupchack.

It was rumoured earlier in the week current Golden State Warriors GM Bob Myers was also set for a trip Down Under to watch RJ Hampton and Ball.

Given the Warriors' disastrous season so far through injury they've gone from play-off expectations to the worst record in the NBA and staring at the draft lottery.

If Golden State had the opportunity to draft Ball it'd be interesting to see if they added a fourth guard or if they would move their most recent addition, D'Angelo Russell.