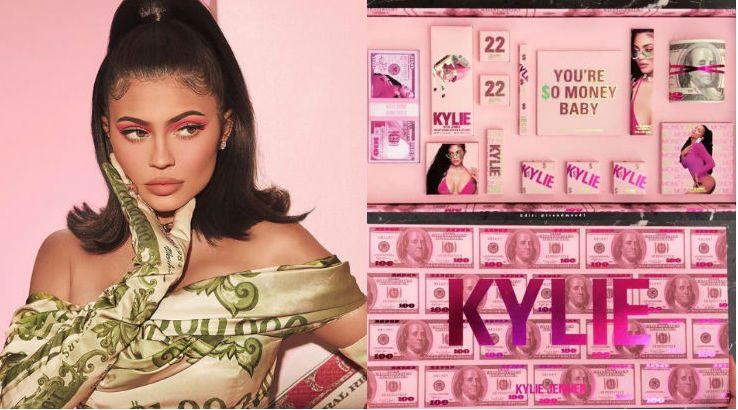 Another year, another Kylie Cosmetics birthday collection and this year's is a doozy.

It's Kylie Jenner birthday season and that means a couple of things. You can expect an extravagant birthday party completely documented on Instagram, probably a new extravagant car and of course, the Kylie Cosmetics birthday collection.

Her 21st birthday collection last year was huge and we expected her 22nd to be no different. Each year tends to have a theme to it and this one honestly has to be my favourite. Why? Because this year Kylie was named youngest self-made billionaire so this year's theme is only naturally all about that money.

So while I wait for my invite to the birthday bash of the year, let's break down what's in this collection.

What's in the Kylie birthday collection?

We have to start off with the OG product of Kylie Cosmetics, the lip kit. This collection only has one of these bad boys in a velvet formula. She chose this "for those who don't wear matte lips". However, this product features a brand new velvet formula so you can really justify the purchase.

The shade is called KYLIE and is her "favourite shade of all time". The lip liner is a warm almond nude and the liquid lipstick is a pinky nude that will give your lips that ombre look Kylie has been rocking lately. Next on the list of makeup I will be spending my savings on is the shimmer glaze eyeshadows. There are two shades called Dime Piece and Money Ain't Everything, which I'd like to formally disagree with.

Money Ain't Everything is a stunning green-gold shade and Dime Piece has more of a bronze tone to it.

The formula of these look creamy as hell and the shine of the swatches is honestly brighter than my future ever will be but I'm okay with that. 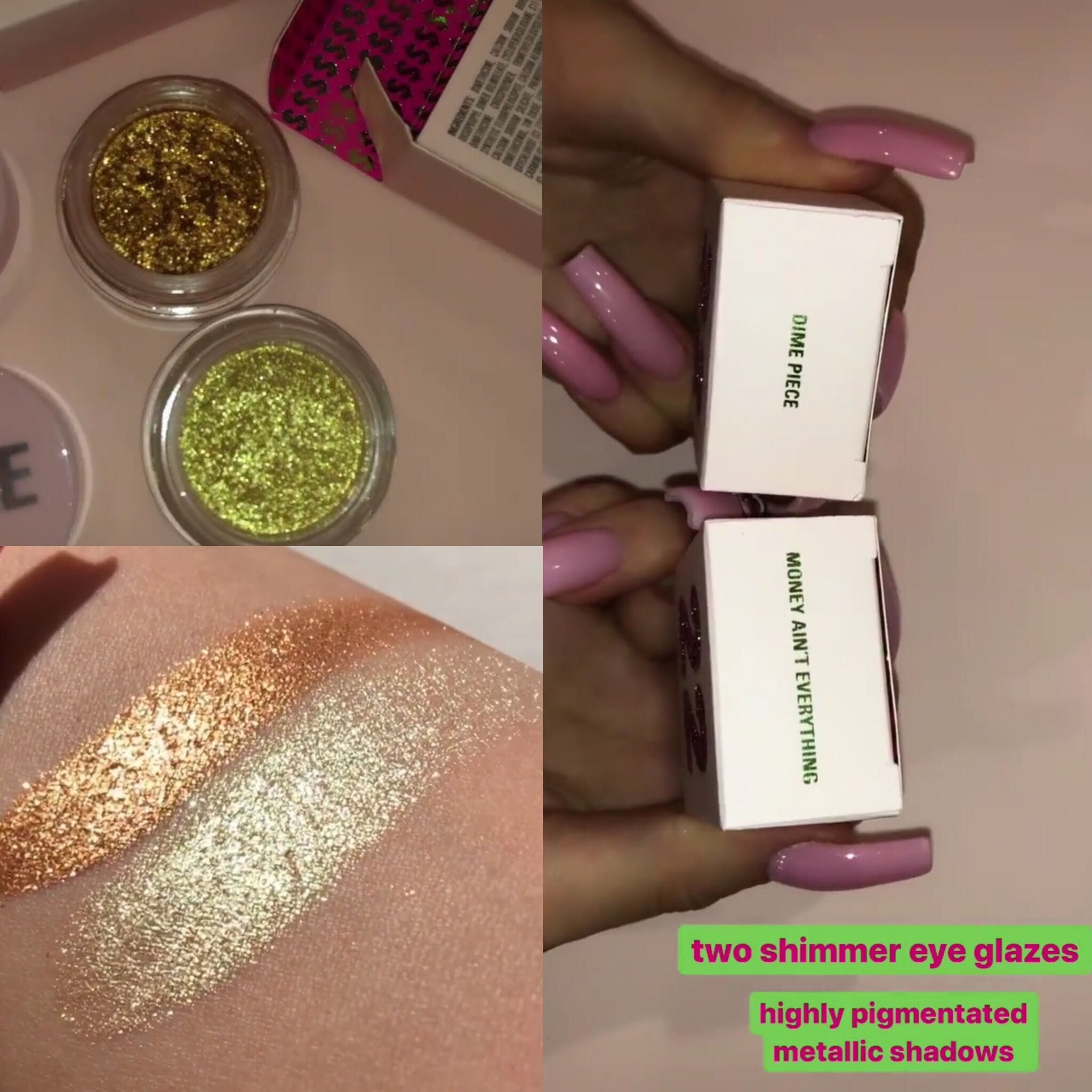 Kylie has been coming out with Kylighters for quite some time now and her loose powders have always been popular. However, we think this one is really going to take the cake... get it? Cake? Birthday collection? Okay, fine.

It's not a normal blinding highlight that we've come to expect from the brand but more of a subtle powder that adds an iridescent glow to the face. It looks to have a bit of a peachy tone with gold flecks in it to really brighten up your complexion. 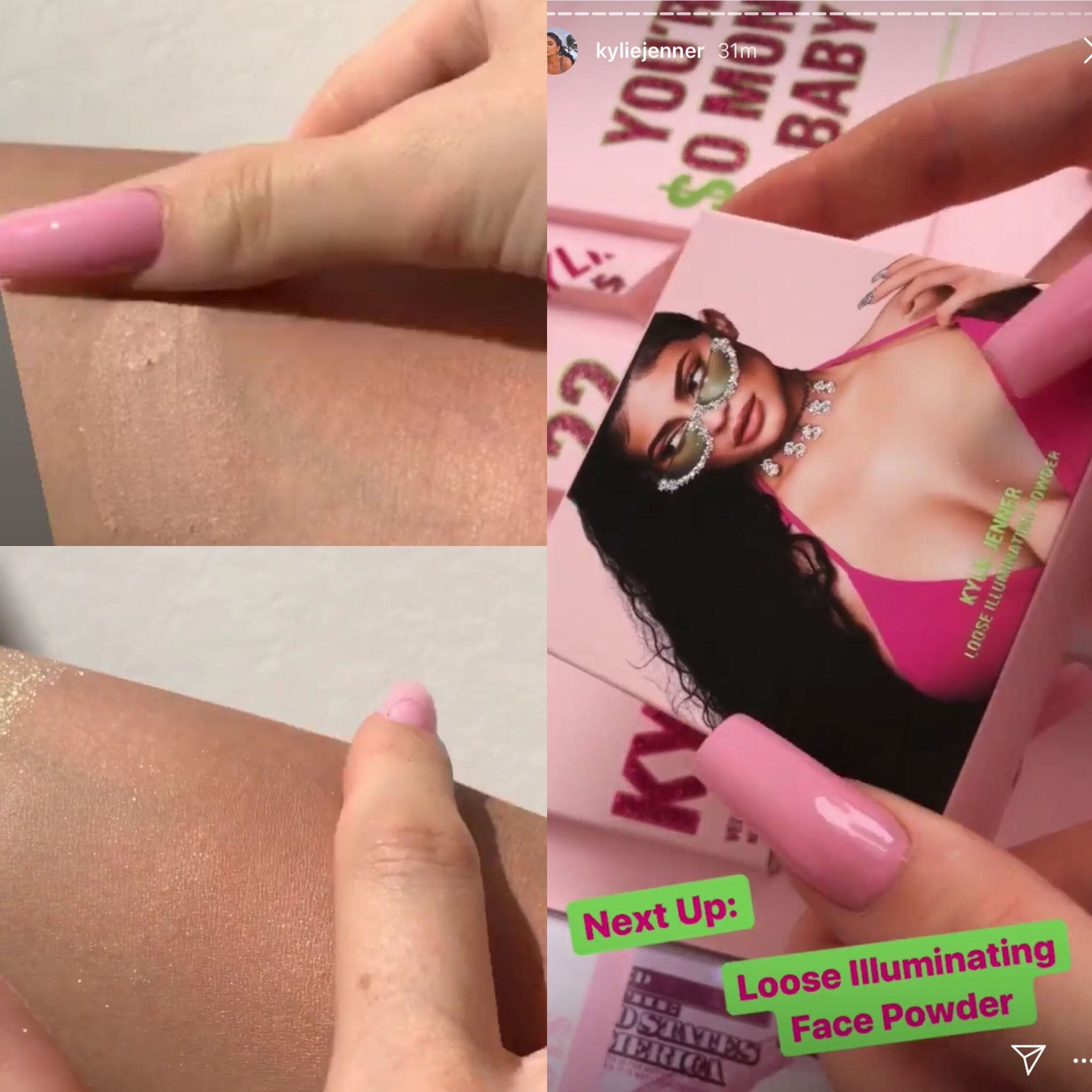 The collection also features a new gloss in a shade that we think matches the lip kit perfectly.

It's called One in a Billion and is a high gloss. It's a peachy pink shade with some gold shimmer to really make your pout pop. It's definitely sheerer in shade so we think it will end up being pretty light and non-sticky on the lips.

We're also getting a bit of a birthday pressie ourselves with a brand new product being introduced. Yep, she is introducing her first-ever liquid liner so you can replicate her iconic eyeliner look – and I can't stress this enough – exactly like Kylie.

To introduce the new product, the first shade is black. It's a brush tip liner because she thinks it creates a sharper wing and is a lot easier to apply. 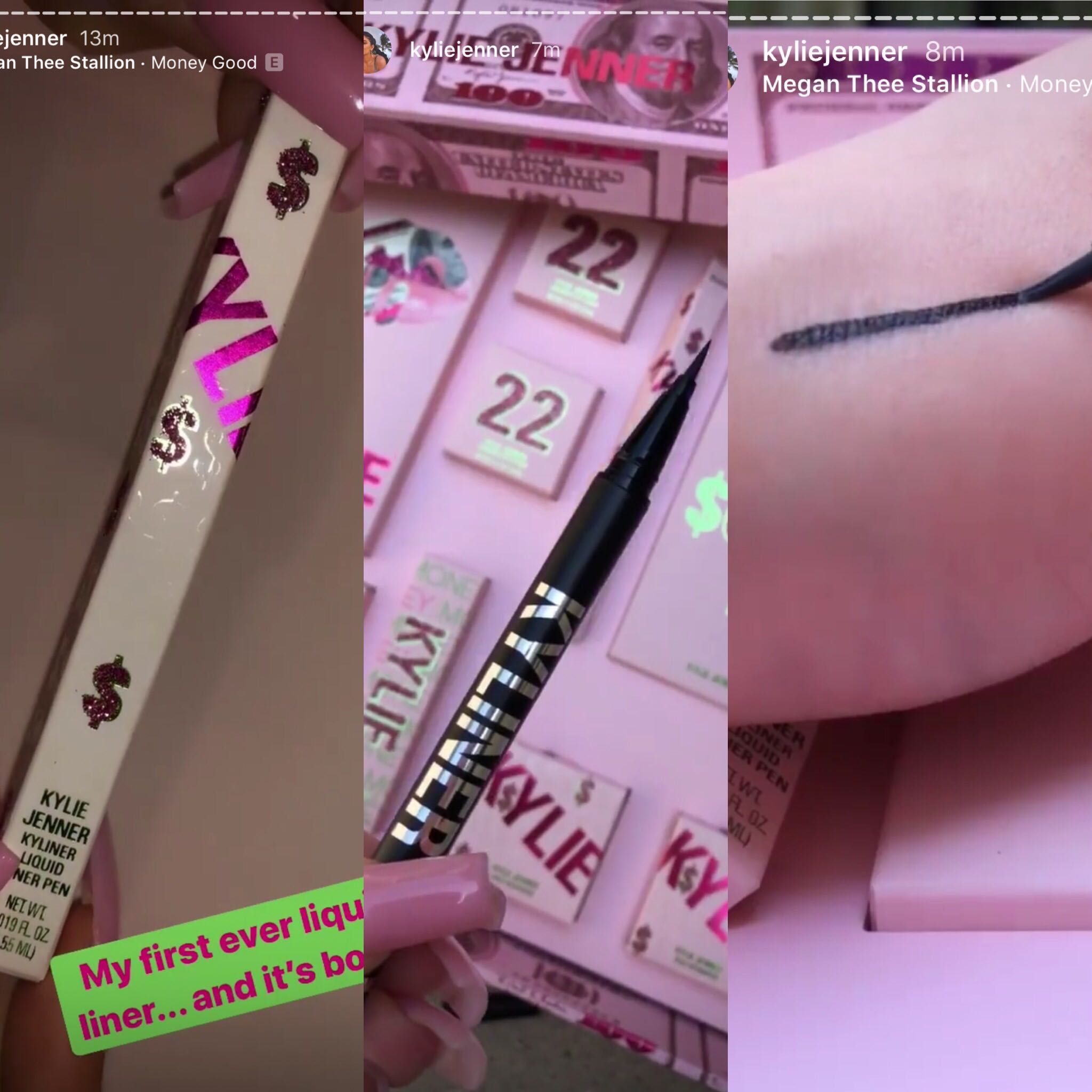 There's not one, not two but three jelly Kylighters dropping to Kylie Cosmetics. Yes, you read that right.

The shades include Family is Gold, 27 Carats and Pink Paper. I kid you not, the formula of the highlighter looks so ridiculously good that I'd very much like to bathe in a tub of it because damn, Kylie, if you're reading this, let's make it happen.

The shades are fairly standard with a pink, gold and peach because let's be honest, how often are you really going to wear a purple holographic highlighter? 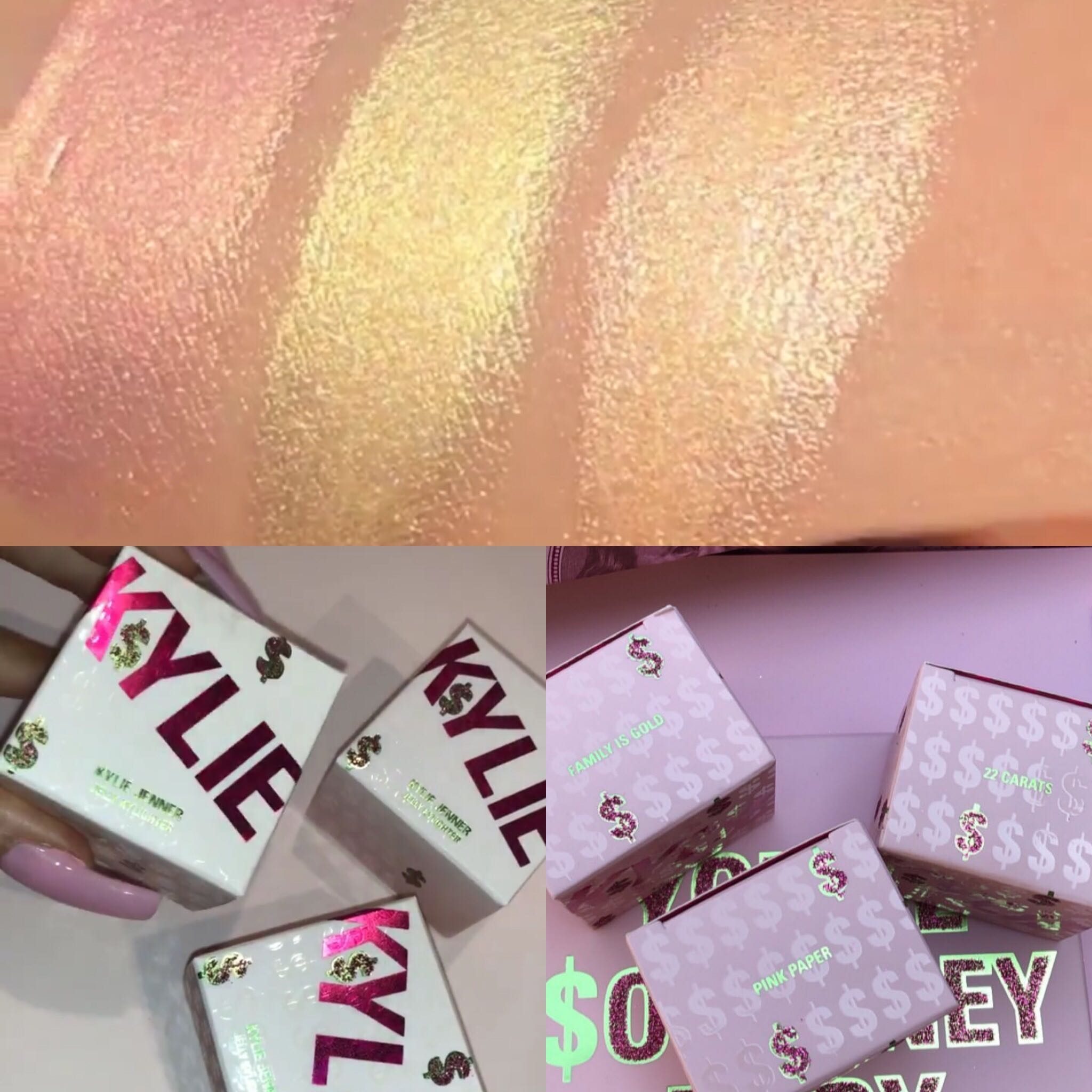 This product is literally a giant as hell highlighter with an embossed dollar sign and I NEED IT. It's a rich gold shade to dust over your body. You can literally apply this anywhere you like – collarbones, shoulders, legs – you name it! Glowing goddess status achieved and we can all thank King Kylie for that. 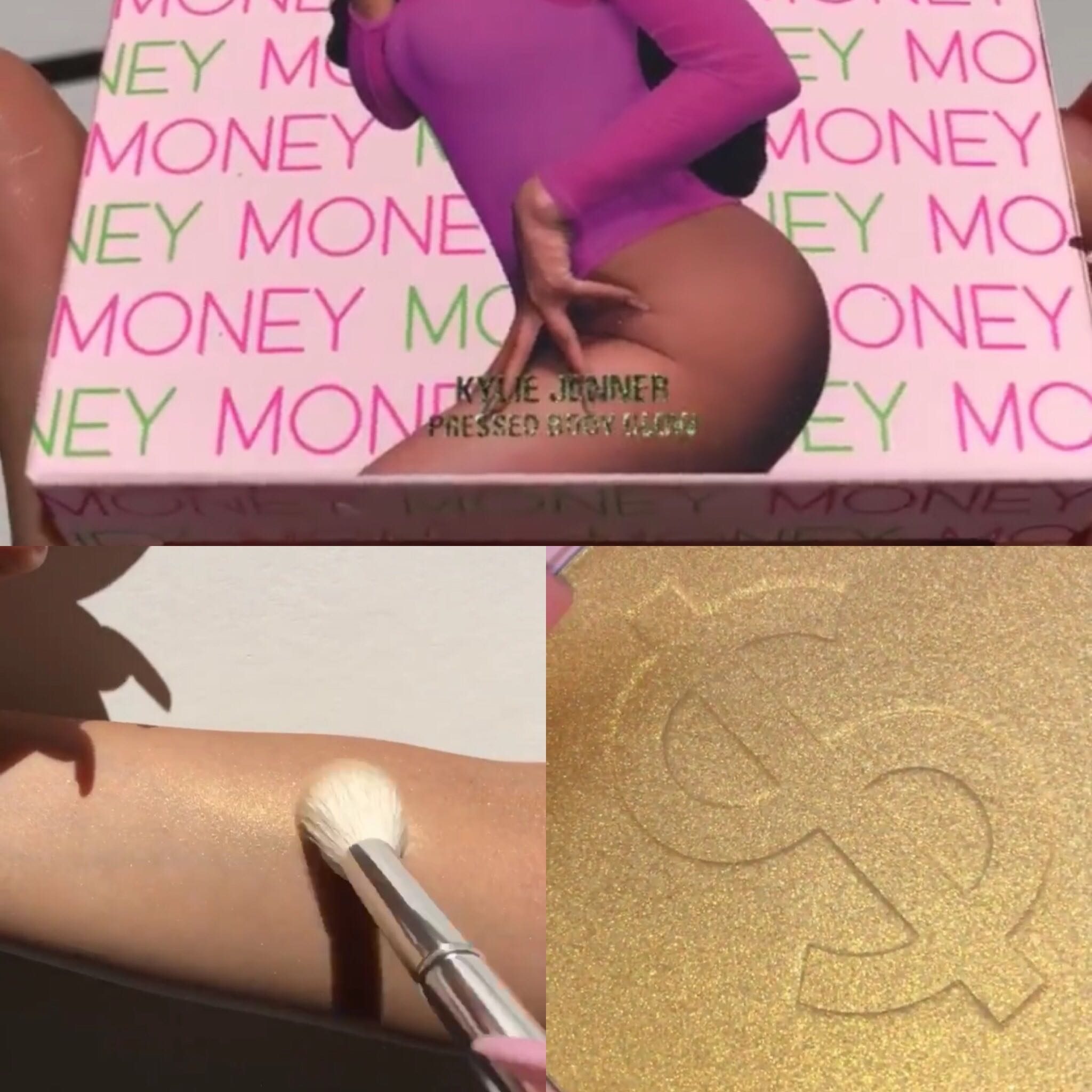 And of course, it isn't a birthday collection without an eyeshadow palette. Now, I'm just going to say this a little louder for the people in the back but...

THIS PALETTE IS UNLIKE ANYTHING KYLIE HAS LAUNCHED AND IT'S AN ABSOLUTE MOOD. 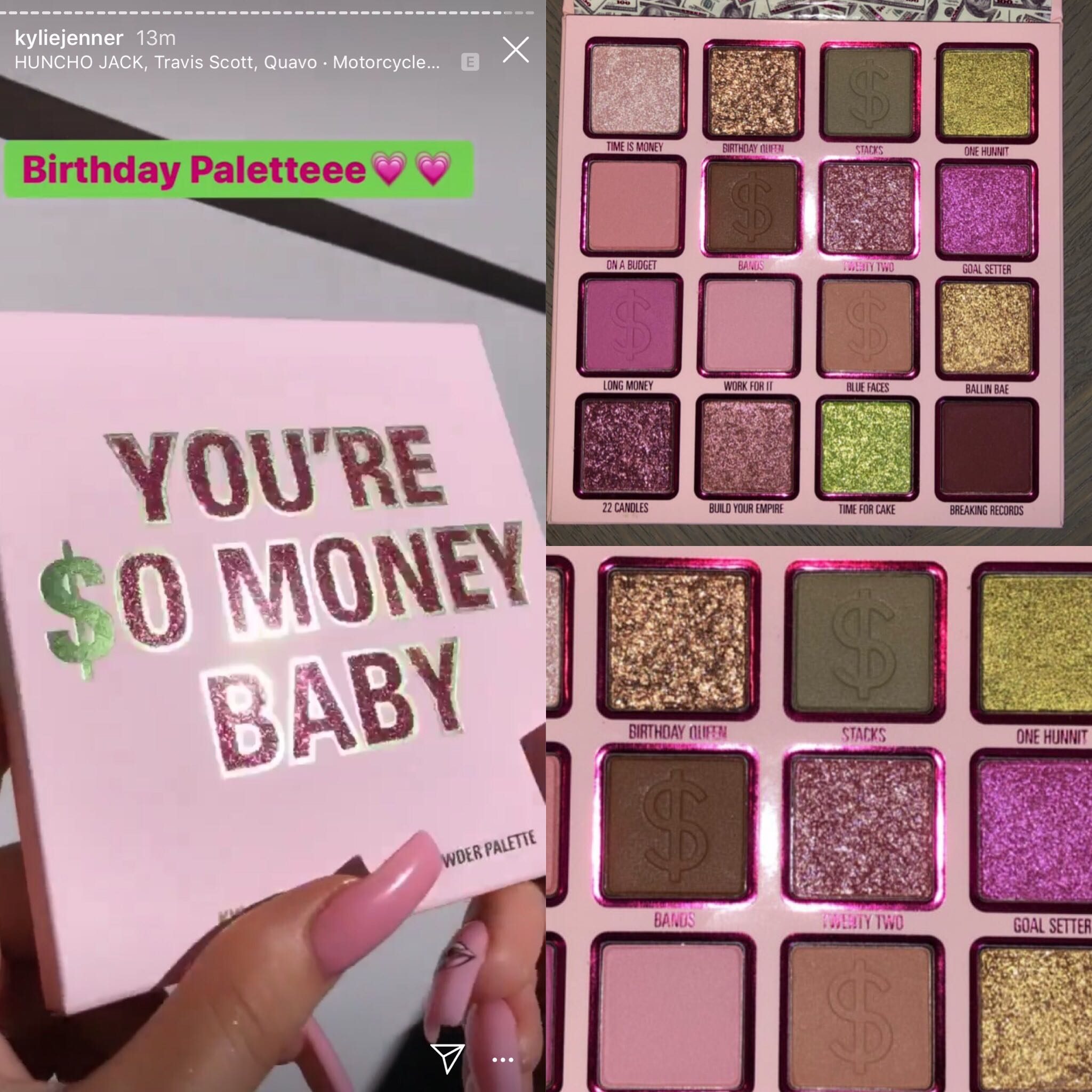 Now, where was I? Oh yeah, the palette is called You're $o Money Baby and consists of a whopping 16 shades which is definitely more than most of the other brand's palettes.

The colour scheme is pretty pink perfection. There is a range of, well, pink shades, as well as gold tones, browns and even a khaki green. There's a mixture of shimmers and mattes and some shades have an embossed dollar sign in case you casually forget Kylie Jenner is a billionaire.

It's official. Kylie Cosmetics is launching a primer and this means one thing. Foundation is not too far off.

However, focusing on the primer, it's got a pump to disperse the products and from the video looks hydrating as hell.

Kylie stated that this is her "first-ever primer and leaves the perfect base for your makeup". 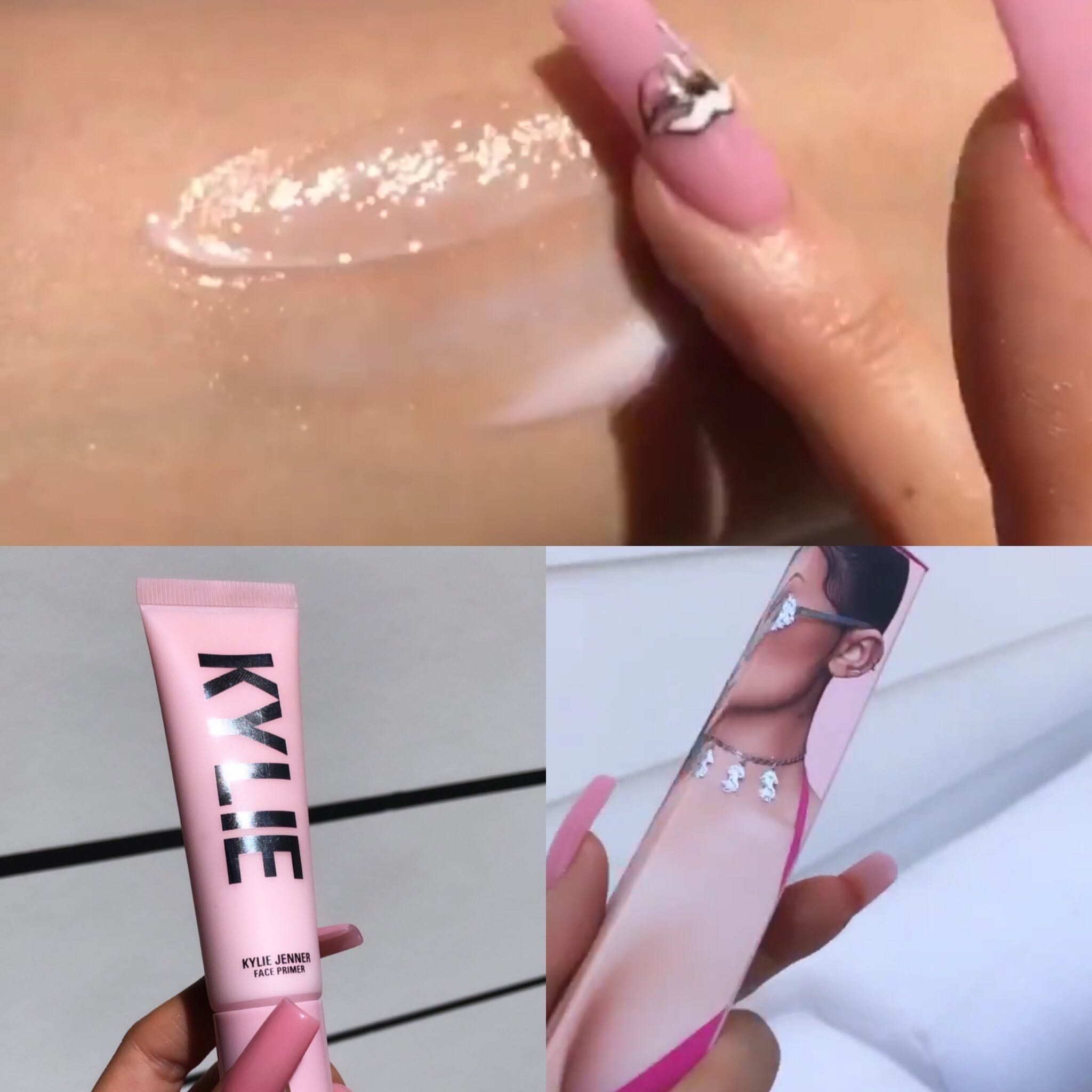 Saving the best for last, Kylie revealed her lip trio in the packaging of a damn money roll, people! If that ain't boujee I just don't know what is.

The lipsticks are creme bullet lipsticks in a red, pale pink and dark pink nude. They're called Mama Boss, Mindset Money and Hustle Honey and you can also buy them as singles if you want. Buuuuut you don't get the money roll packaging so, like, don't do that. When and where can you buy it?

This collection is dropping onto the Kylie Cosmetics website on 10 August so mark your calendars, people.

We're still waiting for her to drop her Kendall Jenner collection but her Summer collection and Halloween Collection are probably just around the corner.