Which Krispy Kreme Pokémon doughnut is the yummiest? 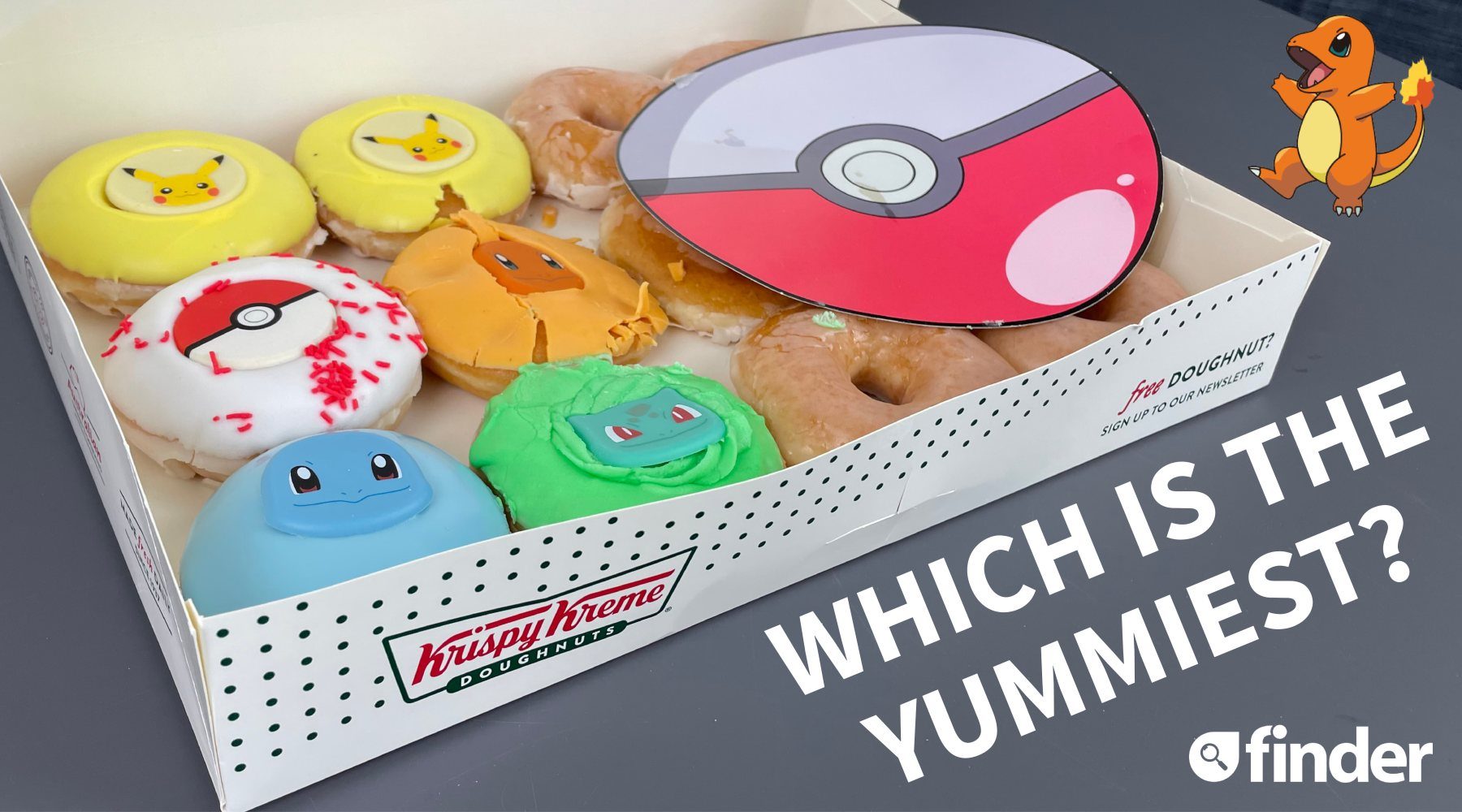 As part of Pokémon's 25th anniversary, Australians can get themed Nintendo doughnuts from Krispy Kreme, but which one is the tastiest?

It looks like the marketing gurus at The Pokémon Company know the quickest way to a gamer's heart. Junk food! The beloved Pokémon brand is celebrating its 25th birthday in style with a host of collaborations and several exciting new games.

With the latter, it's all been happening on Nintendo Switch. New Pokémon Snap is already out, there are plenty of events happening in Pokémon Go, and Pokémon Brilliant Diamond and Shining Pearl arrives just before Christmas. You can pre-order it now. There's even a new Nintendo Switch (OLED) model coming out.

But back to the food. Only yesterday it was revealed that Pokémon cards would become available alongside McDonald's Happy Meals. As a father of 3 Pokémon card fanatics, that one is going to lead to plenty of nagging. And now Krispy Kreme has launched Pokémon-themed doughnuts. There are 5 of them to "collect" if you've got the stomach for it.

But which Krispy Kreme Pokémon doughnut is the yummiest?

There are 5 different Pokémon doughnuts available, which is a bizarre number, truth be told. Why not make it 6 Krispy Kreme doughnuts, given you sell everything in half-dozens or dozens? Well, you can buy them for $3.75 each, but the ultimate is to pick up the dozen pack for $29.95. However, this is exclusive to online orders and can be sent to your home via Deliveroo, Uber Eats or Menulog.

Below, you'll see a list of the Pokémon doughnut flavours. You'll recognise the names from dozens of Nintendo games. Descriptions are borrowed from Krispy Kreme.

Bulbasaur = Also built from the original glazed doughnut, but this time dipped in green apple icing finished with sand sugar, a crème swirl and a Bulbasaur white choc plaque.

Charmander = Build off the shell doughnut, but filled with vanilla custard, dipped in white truffle and finished with a Charmander white choc plaque.

Squirtle = Also using the shell doughnut, but filled with strawberry-flavoured filling, dipped in white truffle and finished with a Squirtle white choc plaque. 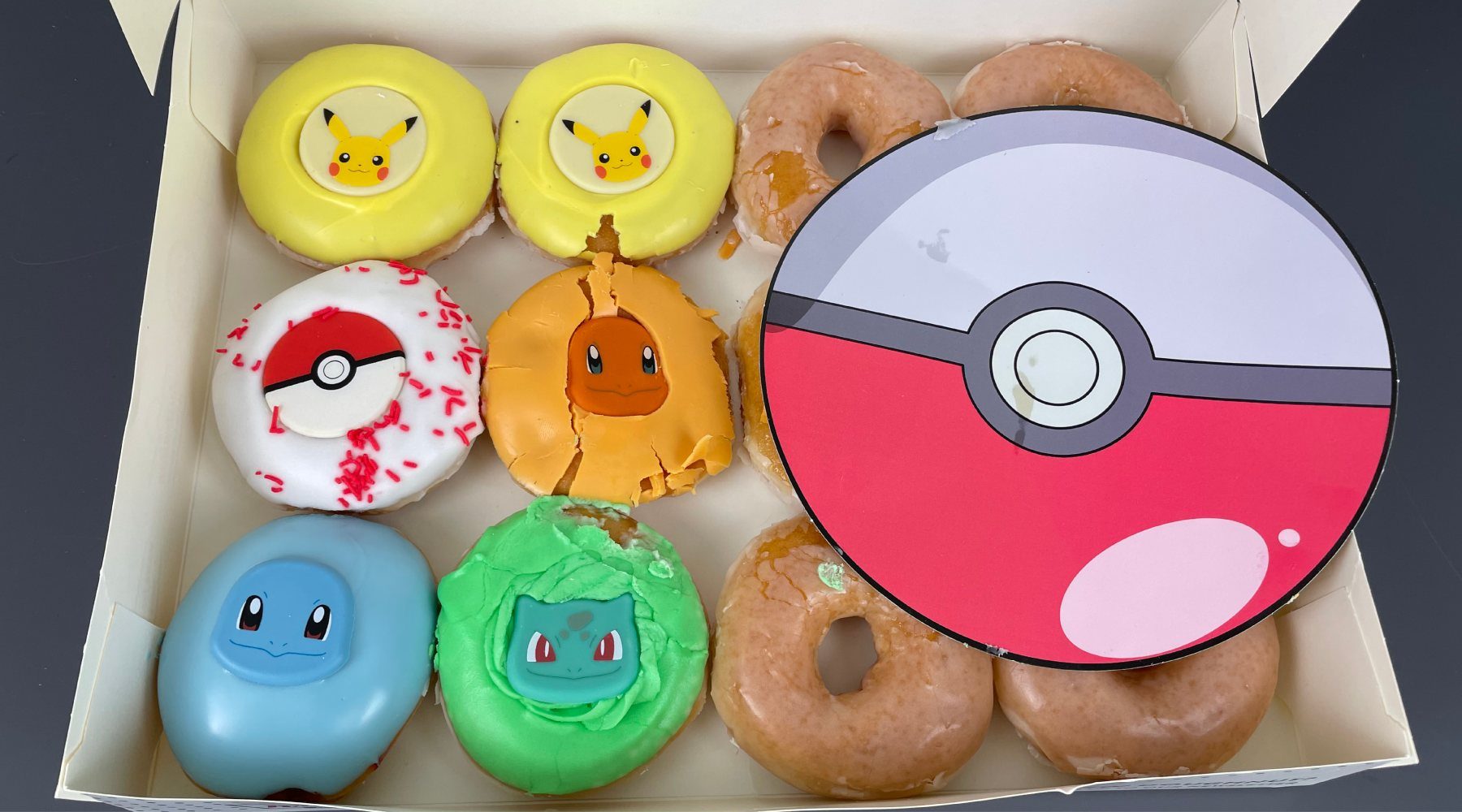 How to order Pokémon doughnuts

You can click and collect individual doughnuts at the stores, but your best bet if you want the dozen pack is to order online. Deliveroo, Uber Eats or Menulog will all deliver you Pokémon doughnuts. As it's only just launched, we've noticed some stores haven't got them listed on their pages yet, so depending on where you are, you may have to be patient or order from further abroad.

I have 3 kids aged 10, 8 and 6, so, I cut up the 5 Pokémon doughnuts and put a piece of each on 3 plates. I then placed said plates underneath their salivating jaws. They were required to eat each piece and then score the doughnuts between 1 and 10. At the end of the experiment, the scores were added up and a victorious Pokémon doughnut emerged.

Verdict: The tastiest Pokémon doughnut is…

The winner of the Krispy Kreme Pokémon doughnut challenge was Pikachu. He scored a perfect 10/10 from all 3 judges for a score of 30. We're sure the critter is happy that he turned up today and has given all the credit to the boys.

A close second place was the Poke Ball doughnut, with a combined score of 25.

Charmander was middle of the field, with a total of 22. This was just under Squirtle with its 23 points. However, my youngest son's 10/10 feels like a bit of an outlier.

Bulbasaur was the least favourite, with 16 total points, but still a pass mark.

If your kids are into Pokémon as much as mine are, here's a little tip for you. My wife and I went and bought a bulk treasure trove of Buy at eBay, and then dolled them out after successes with chores, schoolwork and going a full day without punching a sibling in the face. It was quite the motivator and relatively cheap.