At this point it would take something monumental to turn back blockchain and digital currency adoption.

In the later half of 2017, right as bitcoin soared past $20,000, people were making some pretty extravagant promises of blockchain technology. These promises did not convince most tech companies, and in response to a KPMG survey at the time, about 50% of tech company executives remained ambivalent.

In the fallow cryptocurrency year that followed, the proportion of on-the-fence executives sharply decreased. A few of them lost interest in blockchain, but the vast majority of those which left the fence did so because their expectations of blockchain technology grew. The next survey, a year later, shows some striking differences.

It's worth noting that the survey makeup remained nearly identical from one year to the next, so these results very directly show the evolution of blockchain expectations among senior executives in tech companies.

Survey carried out in Nov-Dec 2017 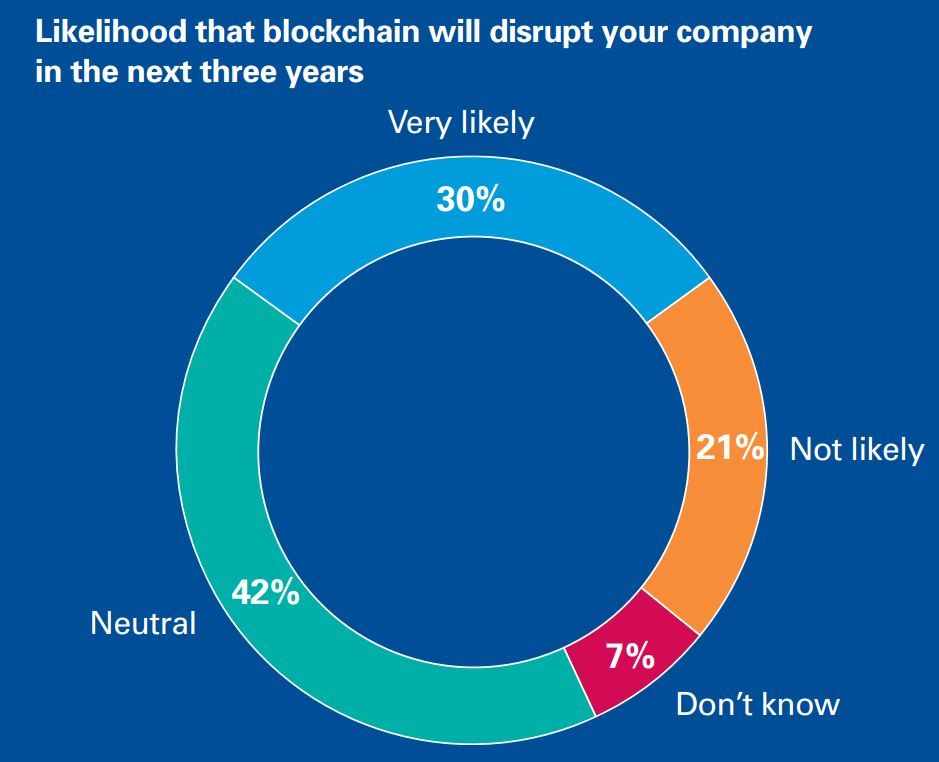 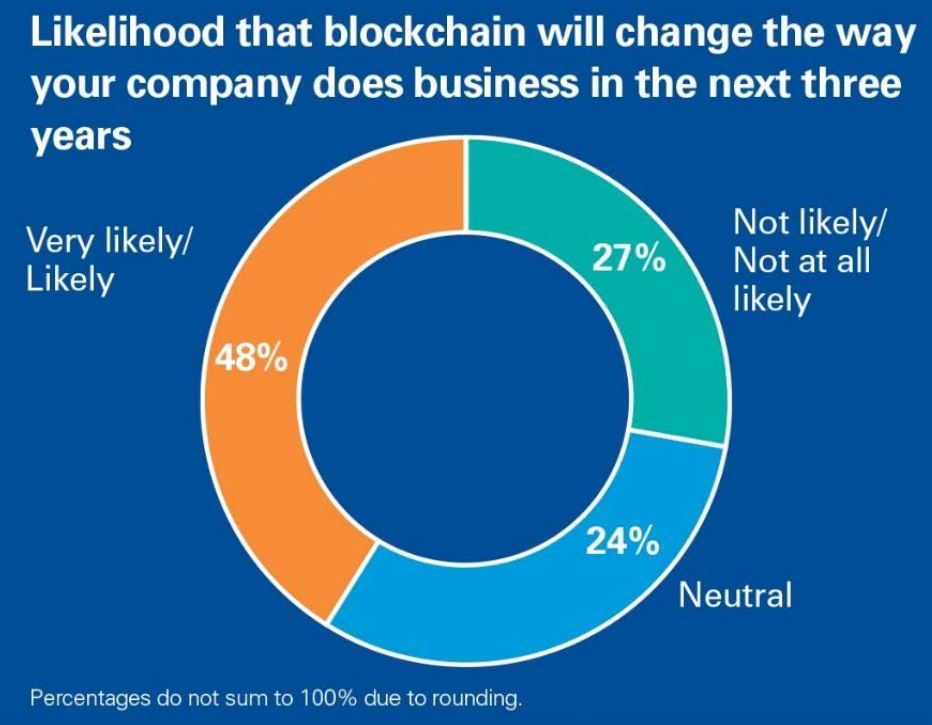 In addition, 41% of respondents in the more recent survey said their company was likely or very likely to implement blockchain technology in the next three years. Only 28% said it was not likely or not likely at all, while 31% remained neutral.

As the hype died down in 2018, people stepped back and started looking at blockchain with a more critical eye – and they liked what they saw.

What can a blockchain do for you?

The big perceived use cases remained remarkably similar over the course of the last year. 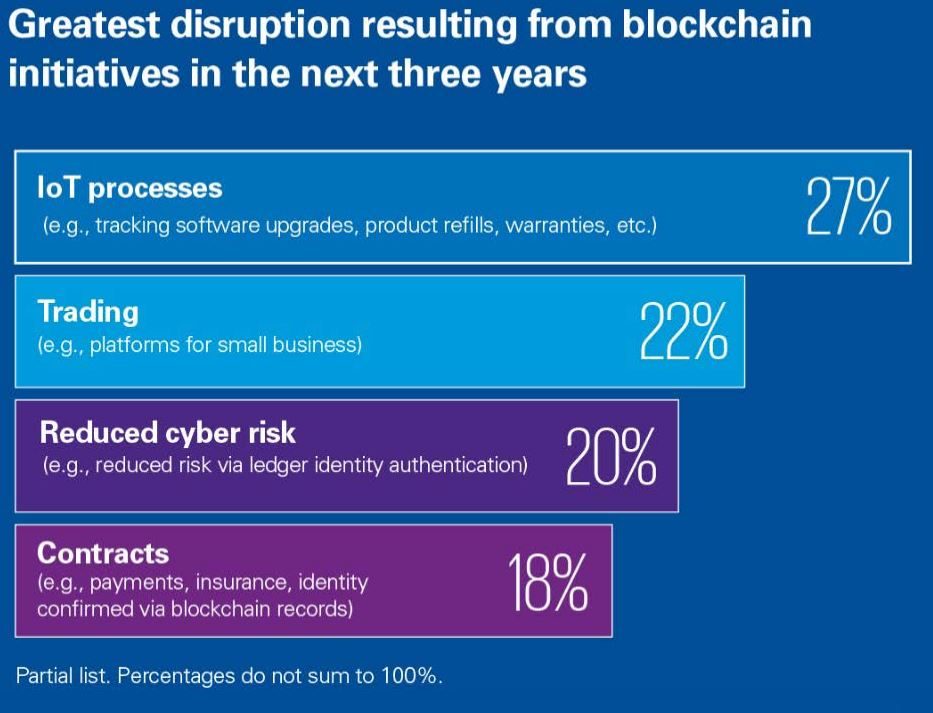 The major perceived use case is still IoT processes, with 27% of respondents both then and now saying it will be the greatest disruption resulting from blockchain in the next three years. The vote for trading applications as the biggest disruption also remained steady at 22% in the intervening year.

In the same period of time, the expectation that reduced cyber risks would be the greatest disruption dropped from 22% to 20%, although a vote for contracts increased by 4%.

On the whole, the change suggests that executives are starting to explore the near term vs more distant blockchain applications, with a special emphasis on automation.

There's a consistently strong expectation that blockchain can help automate a lot of processes in the near future through smart contracts, as well as a growing appreciation for the potential of trading platforms, likely in the context of tokenised assets, and security tokens. This is mirrored by survey results.

Also, the crux of the focus on these two areas, IoT and trade, may be part of a growing expectation that it will soon be difficult to separate processes from payments.

"Digital assets including security tokens will revolutionise not only capital markets but will bind together retail, IoT, logistics, and more to create super-vertical value chains anchored by the blockchain backbone," predicts Kenetic and Social Alpha Foundation co-founder Jehan Chu. "This blockchain technology will empower the next digital economic age."

There's a strong belief in the future of digital currencies among the tech industry, whatever form they might take. And with JP Morgan, Facebook and several countries busy creating their own cryptocurrencies and digital currencies, it's looking like a fairly safe bet.

There are several key obstacles to blockchain adoption, but none of them are expected to stand for long.

The biggest obstacle is unproven business use cases, with 24% of respondents pointing at this as the main challenge facing blockchain adoption in the next three years. But counter-intuitively, "blockchains are pointless" may be one of the easiest hurdles to overcome. It also suggests that as soon as those real-world applications become more prominent, the tides will turn unusually fast.

"In the 9 years since bitcoin was invented, blockchain experiments launched a thousand ships. In 2019, we are seeing the first of those ships land," Chu points out. "We expect waves of successful proofs of concept to demonstrate true value and utility from payments to data security to supply chain which will turn the tide towards mainstream adoption."

Blockchain sceptics naturally point out that these ships have spent nine years at sea on a veritable odyssey without creating a practical and scalable blockchain use case, but there are also indications that this is coming to a head in the very near future.

The good news is that this groundwork is now being properly laid.

As IBM blockchain program director Mark Parzygnat previously said, discussion has started turning away from blockchain as a tool to point at individual use cases, and towards discussion of "blockchain-ifying" entire industries. And as the KPMG survey results show, 2018 might be the first time the tech world achieved the necessary critical mass of blockchain support to make it happen.

"Much of the power of blockchain lies in its use cases. There are possible use cases in everything from supply-chain (where IoT features heavily) to entertainment. The supply chain use case is one of the most obvious ones because of blockchains’ supposed immutability, and the ability to verify transactions in a trustless environment," notes Damien Ducourty, co-founder of the B9lab blockchain education centre.

14% of KPMG respondents said the technological complexity was getting in the way of blockchain, while 12% cited a lack of capital to fund new investment as the biggest obstacle to adoption in their business. Both of these go right to the costs involved in implementation. But both of these are also likely to give way soon.

Firstly, it naturally gets cheaper and easier to go blockchain as time passes. But secondly and more importantly, it's going to get much easier to justify the costs and benefits of blockchain systems in coming months.

The biggest benefits of blockchain named by participants included improved efficiency (23% of respondents) and reduced costs (9% of respondents), so once the use cases start rolling in it will be easier to make sense of the pros and cons involved, and justify the costs of getting involved.

"Although there is an increase in adoption, a lot of the use cases are still just potential," said Damien Ducourty, co-founder of blockchain education centre B9lab. "There needs to be investment around usability and operational support before the potential can be realised. It’s not just down to the technology, there are questions of demand, funding and also the supply of people to actually do the work! However, we’re seeing strong signals that good progress is being made. I anticipate that views will continue to shift in the future."

Despite all its difficulties and flaws blockchain enthusiasm is growing very quickly, and the vast majority of presumably well-informed decision makers in the tech industry who got off the fence in 2018 ended up on the pro-blockchain side of the fence.

Barring a monumental shift of some kind, the clock won't tick backwards on blockchain adoption. It's safe to say blockchain is the way of the future.