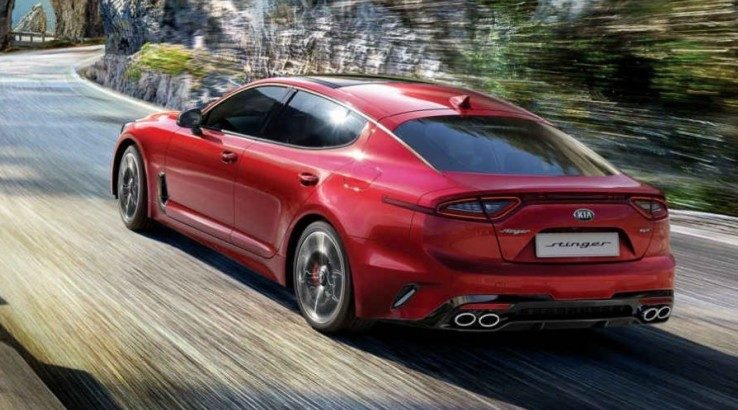 An uncannily good fit for Australia.

Two years ago Kia's head in Australia, Damien Meredith, was lamenting the "cheap and cheerful" brand perception around Kia, saying its cars have "been on sale in Australia for too long."

The Korean carmaker has diversified its offerings since then, but the Stinger might really be the car that changed everything.

Kia is aiming for 200 Stinger sales a month in Australia, up to around 500 as supply increases. That's only a drop in the ocean next to the million plus total market, but it's more than enough for the Stinger to take the crown as Australia's best-selling large sedan under $70,000.

"We’re still constrained by supply," said Meredith. "My view is that we’ll bounce around the 200-250 mark for probably the first 18 months of its lifecycle. After that, I think we’ll build to 400-500 a month, over that period of time. But it’s supply-driven at the moment."

Initial reviews have unanimously described the car as shattering all expectations, so right now, those targets are looking very conservative.

"What Kia has managed to do is to take European designers and European engineers, and make a rear-wheel-drive sporty sedan that would easily cost fifty percent more if it were to wear a German badge." writes CarsGuide.

The sweet spot in the market

In Australia, that might also be a very prudent place for Kia to be too. 2017 has been a blockbuster year for car sales, especially in the keener-to-buy upper end of the market. It's been a commensurately astounding year for SUVs, most of which sit snugly in the same price range as the Kia Stinger.

Kia's described the Stinger as a "family sports sedan," largely aimed at the kind of buyer that's been flocking to SUVs in recent times. Its offroad performance has also been highly lauded, pushing it further into SUV territory.

For a further edge, the upper end of the Stinger range also gets the kind of electronics suite that's been shown to drive decisions in the SUV market, like an on-windscreen heads-up display, as well as safety features like blind spot sensors.

With the rave reviews it's been getting so far, odds are some recent buyers in the SUV market are reconsidering how much boot space they actually really need, and whether a family sports sedan might not be what they really wanted all along.

Kia's rollout has also been blessed with a bit of luck and a lot of planning. According to Meredith, each of Kia's 127 dealers was given a Stinger to help boost exposure, while Kia's sponsorship of the Australian Open is impeccably timed to double down on the release. Meanwhile, Kia's so-far modest complement of online and outdoor advertising spots have probably been well eclipsed by word of mouth.

In Australia, the Stinger seems to be the exact right car in the right place at the right time so odds are you'll see it become a mainstay on Australian roads soon. And if you're like most people, you'll agree that it's a pretty swell sight.