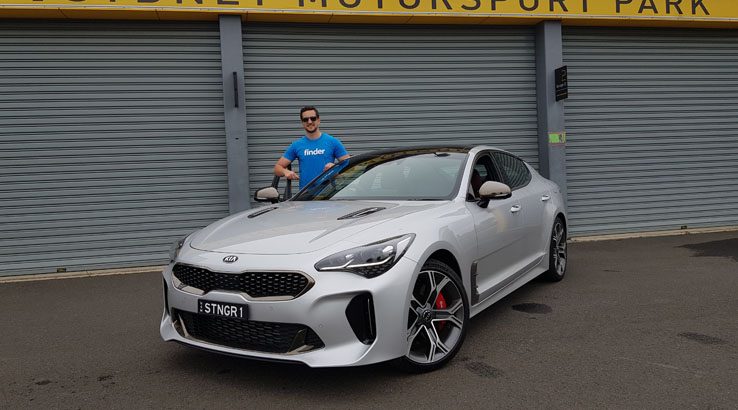 The Kia Stinger is the South Korean company's first attempt at a performance sedan, and it's brilliant.

With Ford and Holden ceasing production in Australia and the V8 models of the Holden Commodore being phased out, Kia has seized the opportunity and thrown its hat in the ring to give Australians choice when purchasing a performance sedan. The result is the Kia Stinger.

We tested the 272kW Twin Turbo V6 Kia Stinger GT and it's an excellent piece of kit. If this is Kia's first attempt, I can't wait for its second.

Personally, I think the Stinger looks great. I wasn't the only person who seems to think so; over the past year I've had the opportunity to test-drive some head-turning cars, but the Stinger is the first one that people have pulled up next to me, asked me to wind down my window and started chatting to me about it. This included some colourful language about how awesome they thought it looked, which I've chosen to omit from this review.

While I'll let the images throughout the review do the talking, I will mention the colour. The black and "Silky Silver" combination we had looked fantastic and is what I would choose if I were buying one.

I'd been watching this car from its announcement through to launch and was hoping it lived up to the hype. Hopping into the Kia Stinger for the first time, it was everything I had expected.

If it weren't for the "Kia" badge on the steering wheel, you could almost forget you were in a vehicle made by the South Korean manufacturer. Its sporty, well-appointed interior makes you feel like you're sitting in one of its European competitors. The combination of red and black Nappa leather gave it that European sporty touch: I don't think I'd be going for all black in the cabin.

Getting the vehicle set up was a breeze with electronic adjustment everywhere. It came alive at the press of the "Start" button.

It's a car that feels both special and significant at the same time. Its twin-turbo engine is capable of delivering tremendous power quickly, but you almost don't want to use it because it really is a nice car to just drive.

A Head-Up Display with integrated satellite navigation means you're looking at the infotainment system less and have your eyes on the road more. Your speed, upcoming turns and even speed cameras are all displayed on the windscreen.

There's a range of settings to adjust various things within the engine and suspension. Smart, Eco, Comfort and Sport are all options available to you as well as Custom. For the most part, we found ourselves cruising in Comfort mode. Shifting between the different settings you can noticeably feel the difference.

In Comfort mode, the ride was quite good for a low-slung sports vehicle. The adaptive dampers helped the vehicle absorb bumps and jolts while still feeling responsive when driving. By shifting into Sport mode, everything sharpens up. Throttle response, transmission and suspension changes made this my favourite mode.

If you're looking at purchasing the Stinger, you're probably interested in the performance aspect of the vehicle. I can tell you this: you will have no problem getting to the speed limit very quickly. You will not be disappointed. The big, red (in the case of STNGR1) Brembo brakes mean you will have no trouble stopping, too.

Having enjoyed the Kia with perhaps a heavier foot than I should, as well as sitting in many of the traffic jams Sydney has to offer, I was seeing roughly 12.4 litres per 100kms, which isn't too bad.

One thing that has been reported is the paddle-shifters automatically shifting back to drive after 30 seconds of inactivity. While I can see the issue with this, realistically it won't be a massive problem on Australian roads.

Steering is light and responsive and is complemented by 360-degree cameras and sensors you can use. You won't have a problem driving, parking or manoeuvring the Stinger anywhere with this feature as you can also utilise it in reverse.

We tested the Kia Stinger GT on a 40-degree day before Christmas and along with the dual-zone climate control, got a surprising amount of use out of the seat ventilation, which is a nice thing to have on hot summer days in Australia. The roof is able to switch between normal, moonroof and a sunroof, which is another great feature for a new vehicle in Australia.

Passengers have 2 USB points and 2 12V sockets to charge devices while there is also a wireless charging bay for the driver and front passenger.

How is life in the back of the Stinger GT?

Sitting in the back there is decent leg room, but not much toe room due to the low driving position. Another thing I noticed in the back is a lack of headroom due to the sloping roof. At just over six-foot tall, my head was touching the roof. Passengers any taller than this will be very uncomfortable.

But if you're buying it to drive, you won't be in the back. And with a Stinger you will get there quickly.

The Stinger GT comes with all the latest safety and tech features to keep passengers as safe as possible. Along with seven airbags, you get the following and more:

How is the Stinger's infotainment system?

The unit itself is easy to use and responsive. You won't find yourself pressing three or four times to get it to access something. The in-built satellite navigation is also quite good. Along with this, you have access to Apple CarPlay and Android Auto.

What is the boot like in the Kia Stinger?

With 406 litres of boot space, it doesn't have the same boot capacity as say a Skoda Superb liftback with 625 litres but is in line with the Ford Mustang GT. It will hold a decent amount of cargo, but if this is a major purchasing consideration for you, there are vehicles with more storage.

How long is a Kia Stinger warranty?

How much does servicing cost on the Kia Stinger GT?

This is Kia's first attempt at a performance sedan and it has started impressively.

The Kia Stinger GT is a vehicle that would worry European rivals for a price that's significantly lower. Compare the Kia Stinger to, say, an Audi RS3 and you're looking at a price difference of roughly $20,000 in the Stinger's favour. With the Audi, you're paying $288.77 per kilowatt whereas the Stinger we tested comes out to $230.83.

I am personally a massive fan of the Stinger and am eagerly looking forward to what Kia comes out with next.

The Ford Focus ST is perhaps one of the…

Every hybrid car in Australia ranked

Four expert reviews of the Toyota Camry in…

What if I were to tell you that there is…

Looking for a new ute? Don't buy one till…

If you're looking for a premium, luxury or…

Here's why the Outlander PHEV may be the…

The iLoad is a no-frills, uncomplicated…

Does the world's best-selling SUV still…