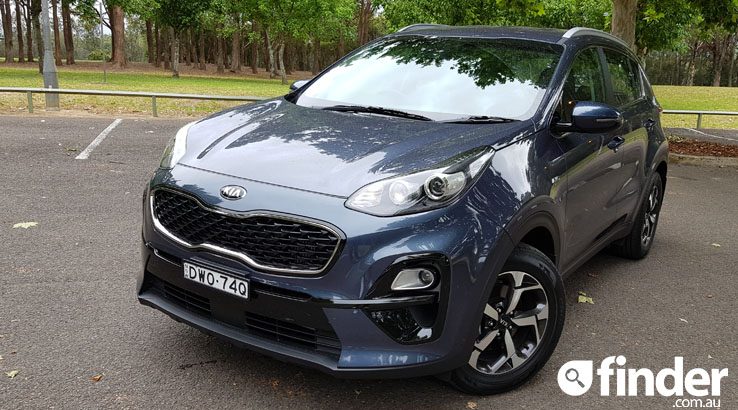 In November 2018, 4 out of the top 10 vehicles sold in Australia were medium SUVs. While Kia's newest entrant in the category, the 2019 Kia Sportage Si Diesel, wasn't among these top sellers, it does have some impressive tech that the other top sellers don't. But we'll get into that later.

Scoring a 79.5% Finder Score which ranked it second on our Car Comparison tables, we got our hands on the entry-level Kia Sportage Si Diesel to see if it was worthy of the position.

The Kia Sportage Si Diesel we tested is the entry-level diesel model and is priced at $35,910. The base price is $35,390 and the optional "Mercury Blue" premium paint will set you back an extra $520.

Here is the breakdown of the price ranges:

This is a family vehicle and families tend to do a combination of long and short trips. Because of this, we decided to take the Kia Sportage from Sydney up to the Central Coast, roughly an hour and 40 minute drive in the traffic we had. It's a nice trip that's not so short that you feel like you haven't left the city, but not too far that the kids start screaming in the back.

Despite the name being Sportage, I didn't think the Sportage would feel so sporty, but I was wrong. When putting my foot down to overtake, it delivered a surprising amount of acceleration from its 136kW engine, shifting through 8 gears before cruising on the highway.

The Lane Keeping Assist function was also quite impressive. The car virtually drove itself and kept the vehicle centred in the lane. Quite handy for highway driving.

You would be forgiven for thinking the car's interior would be a bit cozy considering how it looks on the outside. However, when you get inside you realise it's actually quite spacious, with plenty of space and storage for passengers. Kia has done a great job of squeezing as much interior space out of the car as possible.

The infotainment system is responsive and easy to navigate, but satellite navigation is not available on the Si Diesel. So if you are the type of person who gets lost easily or doesn't own an Android or Apple phone that you can connect via Android Auto or Apple CarPlay, you might want to look at a different model.

Dual-zone climate control worked well and was easy to use while the auto headlights will switch off for you if you forget to do it yourself when leaving the car. Another automatic feature was the windscreen wipers that got a workout during some recent storms in Sydney and worked quite well.

One issue I had was with the phone bay. Most people, including me, require a case on their phone to protect it. If you do have a case on your smartphone it won't be able to sit comfortably in its bay while plugged in for Android Auto. While this isn't a massive issue, you may potentially need to replace a few phone cables through the lifetime of the vehicle.

Is the Kia Sportage safe?

Yes. The Kia Sportage offers the latest safety tech on vehicles designed to keep both driver, passengers and pedestrians safe. While it hasn't officially been ANCAP tested, it is anticipated that the Sportage will earn a 5-star rating.

With the MY19 Sportage Si Diesel you will get the following:

While we did not test the airbags or AEB, the FCWS did get a workout when a motorist turned sharply in front of us. The system alerted us to the danger ahead and flashed a warning.

The Kia Sportage is a pretty practical vehicle. It has 5 seats that leave 466 litres of boot space in the back (when the seats are upright). With the seats down you are looking at a 2-seater capable of carrying 1,455 litres. Isofix mounting points in the rear also allow you to attach a baby seat.

Another thing we liked about the Sportage was its tight turning circle. This makes it incredibly easy to drive around the city and compact areas such as car parks and also makes it much easier to park. Couple that with the dynamic reverse camera and you could probably park this car in a room of your house.

When assessing ongoing costs, we saw fuel economy as low as 7.6L/km, which is up from the quoted 6.8L/100km. It is worth noting though that we probably enjoyed the sporty 2.0L turbo engine a bit too much.

Speaking of costs, Kia currently has a market-leading 7-year unlimited kilometre warranty and capped-price servicing too. This means that over 7 years you are looking at an outlay of only $3,580 on servicing.

So, does the Sportage deserve to be second in our tables? Yes, it does.

The Kia Sportage is a practical, safe and well-equipped medium SUV. It's easy to drive and comfortable to ride in, making it a compelling option in the hotly contested segment.

The Ford Focus ST is perhaps one of the best…

Every hybrid car in Australia ranked

Four expert reviews of the Toyota Camry in…