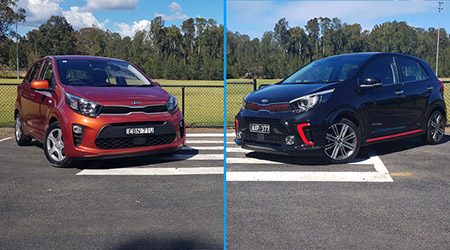 The micro car segment in Australia has never really taken off the way that it has in other countries. Perhaps it's because we love a V8 or an SUV or maybe it's because very few of us live in built-up areas with narrow streets outside of Surry Hills or Erskineville.

Nevertheless, if you're in the market for a micro car, you do have a number of choices. Kia has come to the party offering up the Picanto. We got behind the wheel of both the Picanto S and Picanto GT to see what they're like and if they're more than just a P-plater's first ride.

This one is hugely dependent on taste as a micro car isn't everyone's cup of tea. Traditionally, micro cars have been a bit bland and about as exciting as a toaster.

We will let the pictures do the talking for the Picanto S. 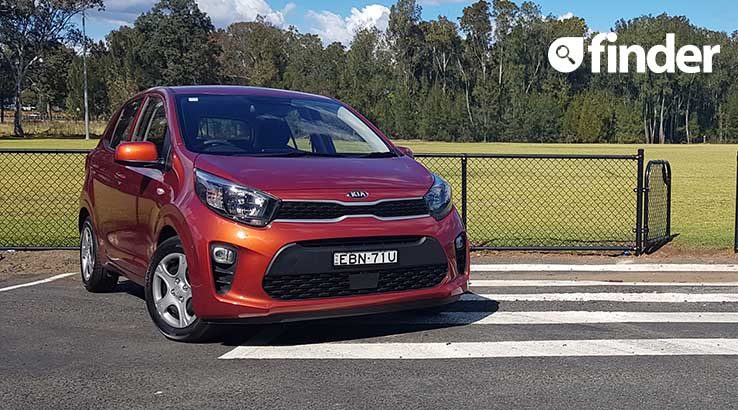 The Picanto GT is the better looking of the two and Kia has done a decent job at making it exciting to look at. Although the cosmetic changes are somewhat minor, the use of different colours has helped to increase the appeal of this variant. 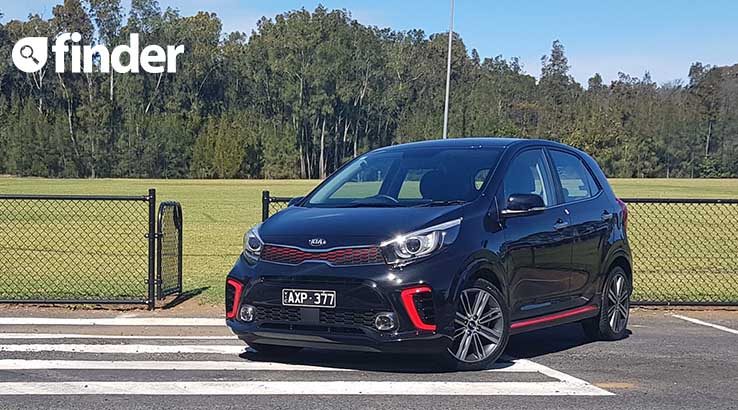 The base model Picanto S has everything you need to get from A to B. You get cloth seats, three cupholders, a 7.0-inch floating infotainment unit with Apple CarPlay and Android Auto and a four-speaker sound system.

Noticeably, there is no centre console storage or armrest and when in my driving position, the B-pillar blocked my arm from comfortably resting on the windowsill.

If you're looking at the Kia Picanto S, you need to remember that it is targeted to a keenly priced end of the market. With that said, everything feels sturdy enough. 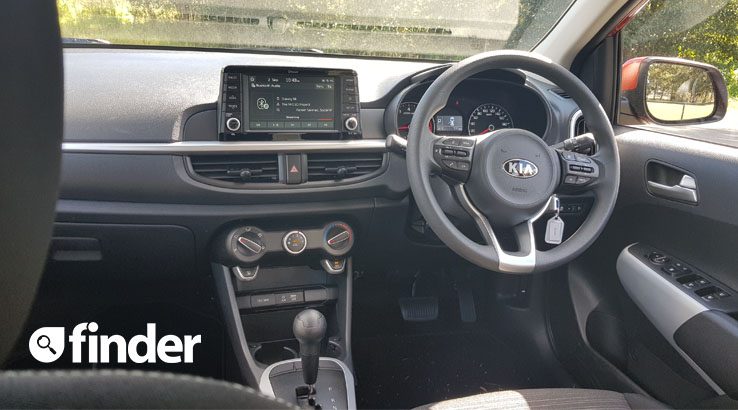 With the GT trim Picanto, there is a bit more attitude inside. You get premium black leather seats with red stitching, black and red inserts on the door and dash, as well as a centre console and armrest. 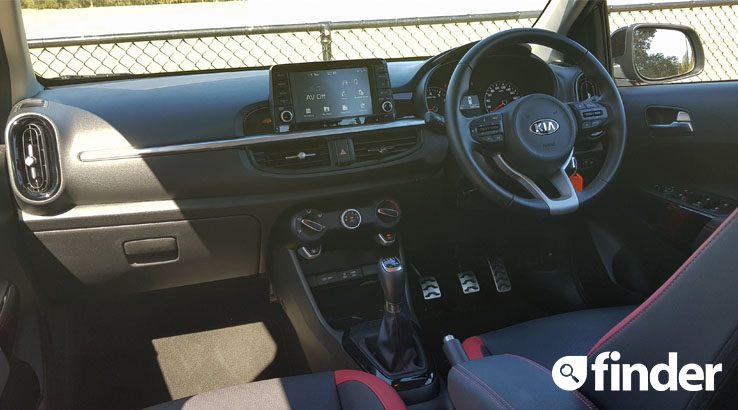 Around town the Picanto S is everything you need.

Steering is predictable and the brakes feel powerful enough. The suspension set-up helps to flatten out road imperfections fairly well too.

Cabin noise is kept in check adequately. Travelling at 110km/h on the motorway, I was able to hold a phone conversation (hands-free, of course) with the person at the other end unable to tell the speed I was going. Trust me, I quizzed them and they came back with 60km/h.

On the motorway, it feels as though the little Picanto needs an extra gear or two in its powertrain. The 1.25-litre, 4-cylinder, 64kW engine is mated to a 4-speed automatic, which at 110km/h means the engine is protesting loudly about having to do a lot of work.

Kia states that the combined fuel economy for the Picanto S is 5.0 litres per 100km, but during our time with the vehicle we saw figures in the high 6s.

This variant thoroughly surprised me. It was a lot of fun.

Although it has a smaller capacity and fewer cylinders, the 1.0-litre, three-cylinder turbocharged unit got the Picanto GT moving at an impressive rate. It is worth remembering too that this car weighs just a touch over one tonne, so it is light and nimble and while it isn't going to set any records, there is enough there to get the heart pumping and put a smile on your face.

All 74kW goes through a 5-speed manual gearbox, which adds to the novelty of the GT. It boasts smooth shifts and the increased gear ratio range helps when zipping in and out of free-flowing traffic.

Cabin noise on the GT wasn't as subdued as the Picanto S, perhaps a result of the larger 16-inch wheels. The suspension was much firmer too, but with a passenger in the vehicle, the ride does become more forgiving.

Fuel economy for the GT is stated to be 4.8 litres per 100km on a combined cycle, though during our time with the vehicle we saw figures in the mid 6-litre range.

On the motorway though, there are two things to watch in both the Picanto S and GT. The first is that the fuel gauge needle seems to drop noticeably, perhaps due to the micro-car's 35-litre fuel tank. It is an adequate size for a city runabout, but will drain on highways.

The second is the lightweight car does get buffeted around by the wake of trucks as you overtake them. Strong gusts of wind can also be felt by occupants. If you're not a confident driver, this may be disconcerting as it is more obvious than in a bulkier SUV or sedan. 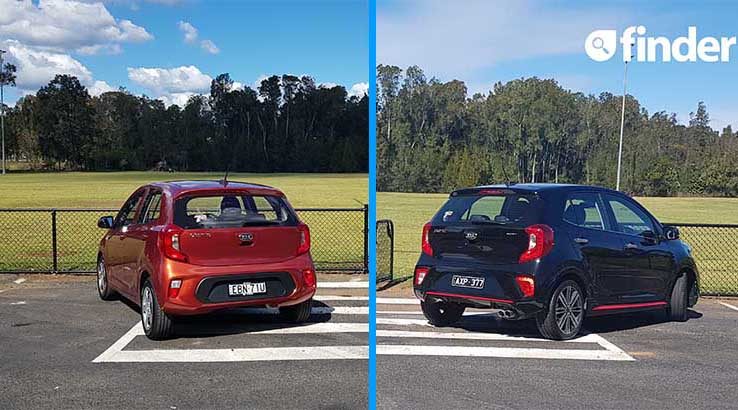 Is the Kia Picanto range practical?

That depends on what you're using it for.

I couldn't physically fit in the back, but it would be suitable for young kids. If you aren't carting people around too often, the rear row doubles up nicely as an auxiliary storage space.

The boot stores 255 litres and the rear seats fold down to make 1,010 litres available. When dropping the seats forward you will find that they don't lay flat. With the depth of the boot that may be an issue for certain objects.

ISOFIX mounting points are present on the two outside rear seats, so child seats can be secured in the back.

As a city runabout car it is perfectly practical, easy to manoeuvre and even easier to park.

The total length of the vehicle comes to 3.6 metres meaning if you spy a parking spot as you're driving past, chances are you will fit.

Both models have more or less the same safety technology. Both feature driver and front passenger airbags, front side airbags and curtain airbags along with autonomous emergency braking (AEB) with forward collision warning, hill-start assist, dusk-sensing headlights, reverse parking sensors and a reversing camera among other features.

Both the Picanto S and Picanto GT are covered by Kia's seven-year capped price servicing.

For the Picanto S, the capped price servicing schedule looks like:

For the Picanto GT the capped price servicing schedule looks like:

If you're after a city runabout and specifically a micro car, then the Picanto is probably a class leader. For $16,000 you're getting a basic, but well-equipped car for the money, that also has smartphone mirroring.

For an extra $3,000, the GT would be my pick, assuming you're happy with the manual transmission, which makes the experience much more enjoyable.

There are a few things to consider though, with legroom in the back being the main one.