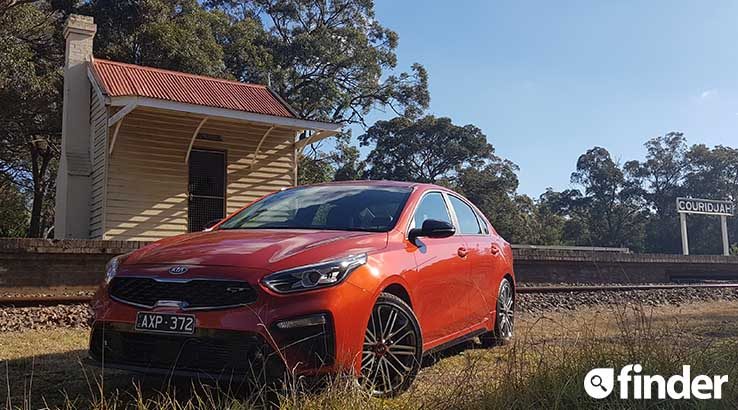 Are you old enough to remember the 90s? Friends was being aired for the first time on TV, dial-up Internet was a thing and the Gameboy was the height of personal entertainment. It's fair to say that at that time, some car manufacturers weren't having the best of fortune. They'd gotten themselves an often unfair reputation as building dull, copycat and budget cars. Oh how times have changed. Kia is one car maker that at one time targeted the lower end of the car market with crazy deals and long warranties.

Of late, the South Korean brands have upped their game, producing cars like the Kia Stinger, Hyundai i30N, Genesis G70 and the Cerato GT. All of which challenge those outdated perceptions above.

This is one of Kia's latest creations. Classified as a "warm sedan" as opposed to a "hot hatch", the GT badged Kia Cerato is a vehicle that I can see appealing to an array of Australians.

We got behind the wheel of the Kia Cerato GT, priced at $32,991 after optioning the "Sunset Orange" paint ($520) to see what all the fuss was about.

How does the Cerato GT look?

Several years ago, as part of a push to turn around Kia's reputation, the bigwigs in the branding division perused LinkedIn, hiring designers from German brands in order to bring up the visual appeal of their vehicles. In my eyes, it's paid off. Only slight in size on the outside, the Cerato GT's aggressive looks are going to appeal to both younger and older generations. With its mesh grille with touches of red, dual exhausts, GT body kit and 18-inch wheels, Kia has put together a desirable-looking car.

But as always, style is subjective and this isn't going to be everyone's cup of tea. Take a look at the photos throughout this review and let us know what you think in the comments section below. 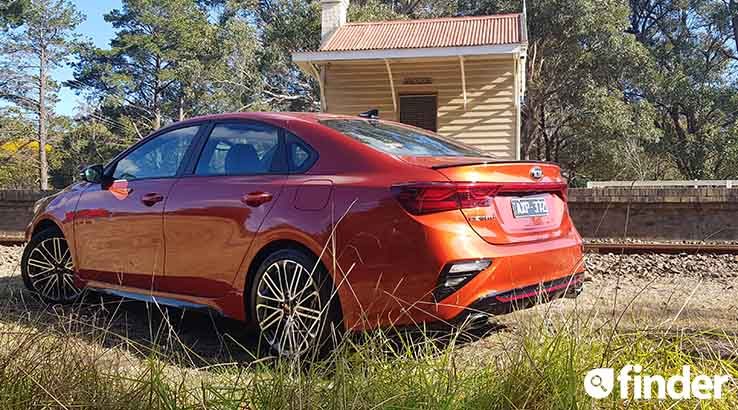 Powered by a 1.6 litre, turbo-charged petrol engine, there is a surprising amount of punch as you climb through all seven gears. That is until you see that it produces almost the same figures as a Toyota 86, with 150kW and 265Nm of torque. Normal and Eco presets can be selected through the drive mode button on the centre console, but to select Sport you need to move the gear shifter into the manual position.

The package overall is the same as the Hyundai i30 N-line and is quite tasty. It did have the tendency to do some odd things though – for example, holding gears for a slightly worrying amount of time and then conversely shifting up and down at will while accelerating.

Despite our use of the Sport mode and it grabbing hold of gears and not wanting to let go, we registered 6.5 litres per 100km. We did a fair amount of highway driving though. Expect slightly higher around the city.

Power is put down through some grippy Michelin Pilot Sport 4 tyres which work hand-in-hand with a firm, but not uncomfortable suspension set up to deliver some delightful cornering abilities. It feels nimble and quick, inspiring confidence when traversing through bends and there is a nice amount of feedback through the leather sports steering wheel.

And while you would probably expect this from a vehicle of this nature, the downside is, while not uncomfortable, when driving on the roads around Sydney, you are going to feel the majority of bumps you go over. Not bone jarring, but you'll feel them.

The cabin seems to be fairly well insulated; however, depending on the surface, the low profile sport tyres can get a bit noisy. But this is true for most tyres with a minimal sidewall.

Overall though, colour me impressed. If you enjoy driving, being behind the wheel of the Cerato GT is a novelty.

It's not too dissimilar to many Kia-family vehicles.

You get leather trim and the seats, stitched with red, are branded with "GT". Not only are they electronically adjustable for the driver, but they are also heated and ventilated for both occupants up front.

There is a nice leather sports wheel that can be telescopically adjusted as well as dual-zone climate control and push-button ignition. A nice touch is that the dash is ever-so-slightly tilted towards the driver, as a good GT car should be. Most surfaces are pleasing soft-touch material.

The infotainment system is the standard 8-inch unit that is shared by Kia and Hyundai. It does a fairly good job and is easy to use and pair up to your phone. You won't get voice assistance though unless your phone is plugged in so it can piggyback off Siri or Google Assistant. With that said, Apple CarPlay and Android Auto are present, should you prefer to mirror your phone.

Room in the back is decent for a car of its size. If your rear passengers are around the 6-foot mark, legroom is a bit tight, but there is plenty of head room.

In the back there are two cup holders, door storage bins with drink bottle holders and directional air vents. 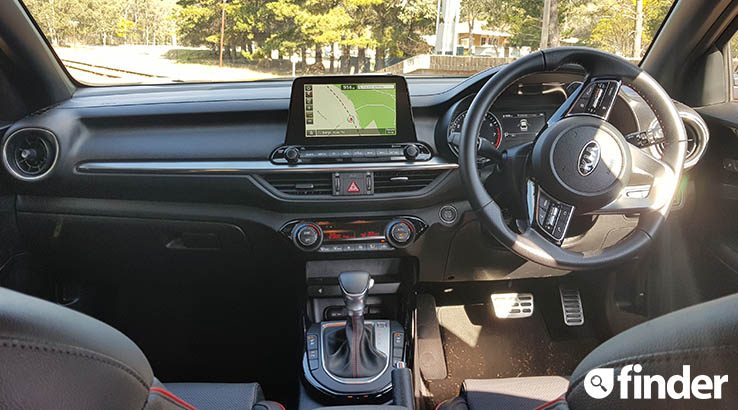 Is the Kia Cerato GT safe?

Yes. It boasts an impressive range of safety equipment and technology.

Fitted with six airbags and a range of modern safety technology, the Cerato achieved a 5-star safety rating.

Some of the tech featured includes:

There is ample boot space available, totalling 502 litres. This can be expanded by folding down the rear seats; however, there are no official figures on what this number comes to.

In the back there are three child restraint anchorage points, two of which are ISOFIX to keep the little ones safe.

As mentioned previously it was pretty economical on our more highway-focused testing. It drinks regular unleaded too, which will save you some dollars over time.

The Kia Cerato GT is a fun, practical, "warm" sedan. I can see it appealing to a lot of Aussies and have in fact already seen more and more of them on the road.

At a price of $32,991 it represents some serious value for money.

If you have some lanky friends though, we'd recommend checking the leg room in the back.