Today it was announced that Kenzo and H&M will work together on a collaborative collection available to the public this November. 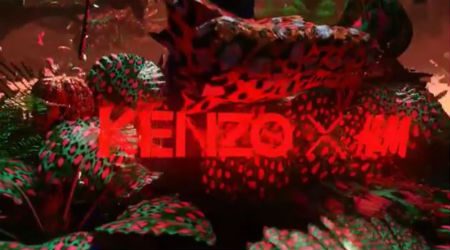 In case you didn't already know, this is kind of a big deal. To put it in perspective, H&M's last designer collaboration sold out worldwide in about two hours.

We've been anxiously awaiting the announcement for the next H&M designer collab and the news that the partnership is with Kenzo could not be more welcome.

Kenzo is a luxury French fashion house which was founded by Japanese-born Kenzo Takada in 1970. Since the label's inception, Kenzo has been known for its quirky, Asian-influenced aesthetic with formal and expert European construction. Kenzo never takes itself too seriously and consistently creates fun and lively pieces that are made with the precision we expect of high-end design.

Even if you think you don't know Kenzo, you probably do. One of the most famous designs by the label is a ubiquitous celebrity favourite: the shirt emblazoned with a large tiger motif. It has been spotted on Joan Smalls, Jessica Alba, Jennifer Lopez and even Queen Bey.

H&M's magazine chatted with the head designers of Kenzo, Carol Lim and Humberto Leon (who are also the creators of Opening Ceremony) and asked their feelings and plans for the collab.

”We wanted to really tell the story of the brand and of us. Together with H&M, we will invite all the customers and fans to the real Kenzo world," said Leon.

H&M has previously collaborated with designers like Alexander Wang, Isabel Marant and Versace. Perhaps most memorably, H&M collaborated with Balmain last year. The pairing produced a stunning capsule collection that incited global #Balmaination fever. As a result, the collection sold out in stores and online in about two hours worldwide.

So if you're planning on getting your hands on some of the piece from the Kenzo x H&M collection you better have a game plan. Fans of H&M and Kenzo will be able to pick up the reasonably-priced designer items from selected H&M stores and online stores from November 3.

This is the global release date, which means Aussies will see an early-morning release (perhaps the next day), as collections are typically timed to go on sale during the mid-to-late evening in the USA. We'll keep you updated with times and store locations as more information is released.

For anyone desperate to get their hands on pieces from the collection, here are a few tips:

1. Head to the Sydney Pitt Street Mall store or GPO store in Melbourne.

Even though Australia doesn't have access to an H&M online store, some people will probably try and use a VPN and shop through another country's online store. Don't do this. The sites get so much traffic that they end up crashing half the time. You'll just be sitting in front of a computer anxiously and angrily refreshing until all the stock sells out.

3. If you're desperate, consider camping out

If you really, really can't live without one of these pieces in your life, then you might want to consider camping out in front of the store. Lots of other people will be doing it. Alternatively, try and get there a fair few hours before the store opens. If you turn up an 9am when the store opens, you'll just be waiting in a line that wraps around the block. The collection will sell out before you even make it into the store.

4. Know what you want before you go in.

Usually, shoppers are allowed inside in groups of 20 for just ten minutes at a time. This is hardly enough time to browse or let alone try anything on. So, do your research. When the collection preview goes up on the site, pick out the pieces you want or are interested in then.

Remember that more often than not, there is limit to how many pieces you can buy at a time. It's usually five, so don't bother snatching up as much as you can carry and taking it to the counter. Be very selective.

Unfortunately, many people abuse the system and will buy a whole bunch of stuff to sell on eBay for twice the price. It's not ideal, but if you miss out on the collection in store, there will definitely be some pieces on eBay for you to buy. You might just have to pay a little more for them.