Just Cause 4 hands-on: Sucked into a pre-order by an AI tornado

Fans of wanton destruction really ought to mark Just Cause 4 as a main objective on their mini-maps.

I don't know if it's a sign of age, or just too many games played, but whenever I'm given free time in a preview session I like to do weird, unstructured things. My younger colleagues all seem to want to blast out as many story missions as possible and then reveal the info to their audiences to garner hits and eyeballs. Me? I don't want any of that spoiled for me, nor anybody else. My goal ( if you could even call it as such) is to get in as much trouble as I can in the shortest amount of time possible. If I can break the preview build in the process, all the better.

I also try to ask the hard questions of my demo handlers. Like "is that zeppelin there on the distant horizon a stripper blimp like the one in Just Cause 2? You know, with both male and female dancers to appease folks of all strokes?" And "I just noticed that in your debug menu one of the toggles is 'Jesus Mode' – is that as powerful as God Mode?" The answers that came back (in this case "no" and "what's a stripper blimp?") are unsatisfying.

What you really need to know is that Just Cause 4 is an eager enabler for shenaniganisers like myself. Forget the dour, self-serious sandboxes of Red Dead Redemption 2 and Assassin's Creed Odyssey, Avalanche Studios hands you a well-trod revolution story but also a Bunning's Warehouse full of destructive tools.

Quick note: I'm deliberately downplaying the aforementioned narrative because this outing marks the fourth time I'll be using Rico Rodriguez to overthrow some despot in control of a postcard-perfect island nation. I just don't care about the resistance at this point anymore. I'm here to make things explode, first and foremost.

It's very good news then to hear that Avalanche has enhanced the opportunities of Rico's signature suite of bat-gadgets. As always, Rico gets about by alternating between grapple hook, parachute and wingsuit – three mechanics that work remarkably well in tandem with one another. They're so good in fact, you can basically forget about doing the grand theft auto thing. Cars are a secondary means of transportation in this world. Good thing too as they've handled like shopping trolleys since day one of this franchise (4 improves the physics a touch, but it's still no GTAV).

JC4 takes the grapple launcher to insane new levels of entertainment by letting you basically become your own Q Branch. You can pause the game, bring up a menu and apply a ridiculously large amount of behaviours to the grapple pods shot from your wrist. You might want to make your grapple projectile deploy a balloon that lifts a tank but stops at a certain altitude before exploding. Hell, you could strap a tank with said balloons, slap some jet boosters on its butt and hover that thing into an enemy outpost like the world's weirdest makeshift gunship.

Alternatively, if you're a sadist you might opt to create a gadget that rapidly reels in two objects at one another before detonating on impact (in this case two hapless civilian NPCs). I'm also told there are millions of gadget combinations to try. You're limited only by your creativity and/or nefariousness.

JC4 offers one other source of mischief for you, too, if tinkering in menus isn't what you're into. For the first time in the series, this physics-heavy open-world has been plagued by a tornado. Fitting in with the premise that is more or less "the bad guys are controlling the weather on this island" this wild beast of a thing can be spotted from miles and miles away. It has its own AI routines and, rather amusingly, the NPCs in the world show it nowhere near the respect it deserves. 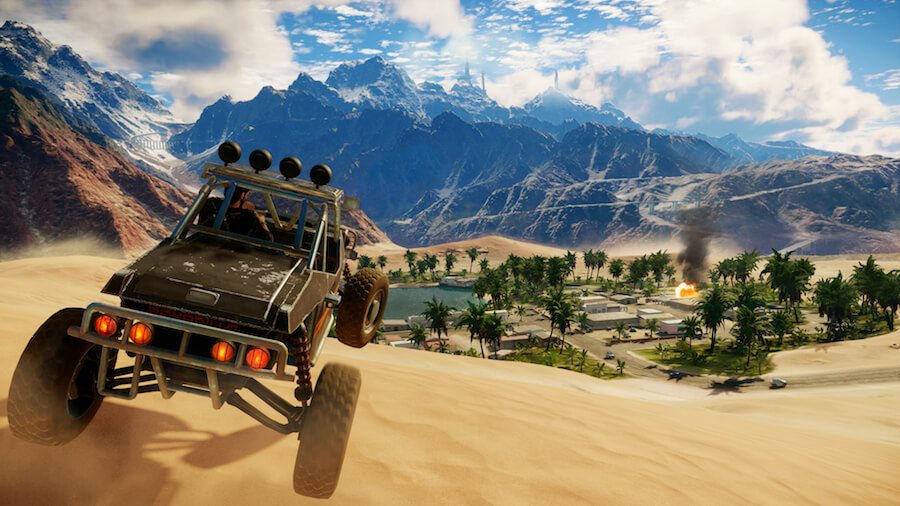 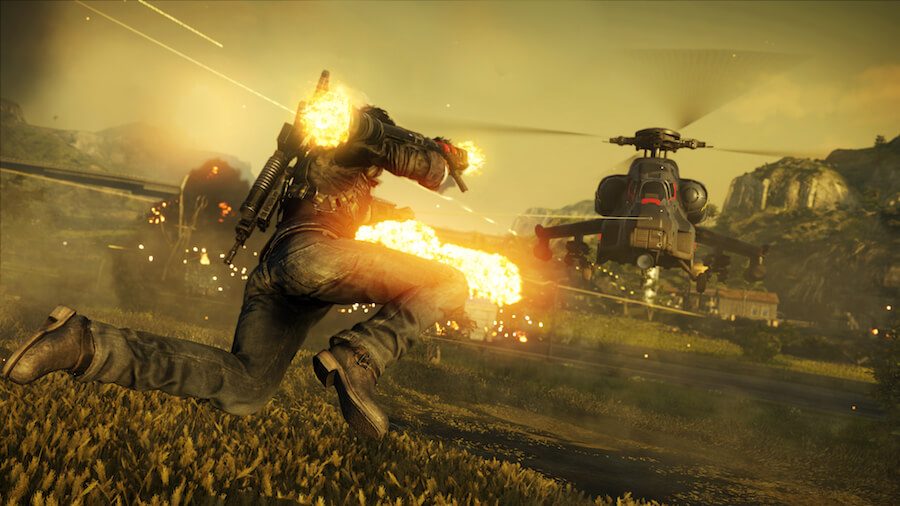 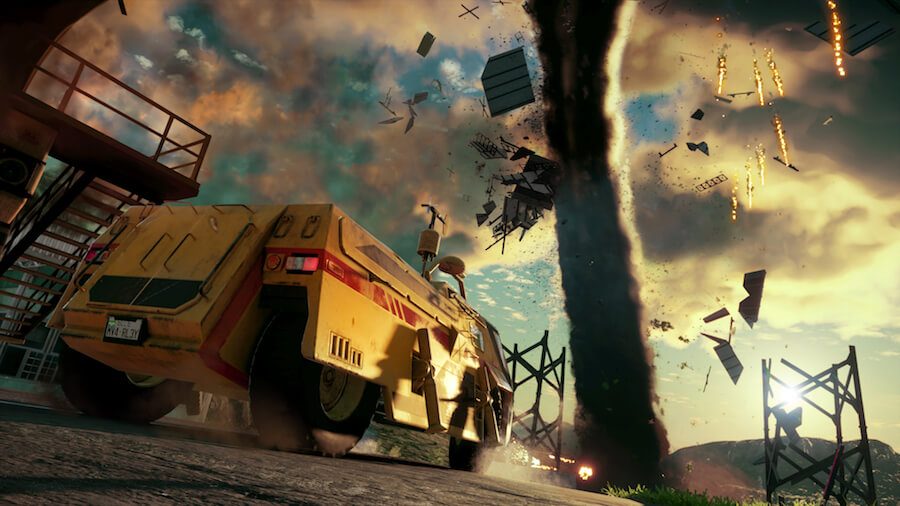 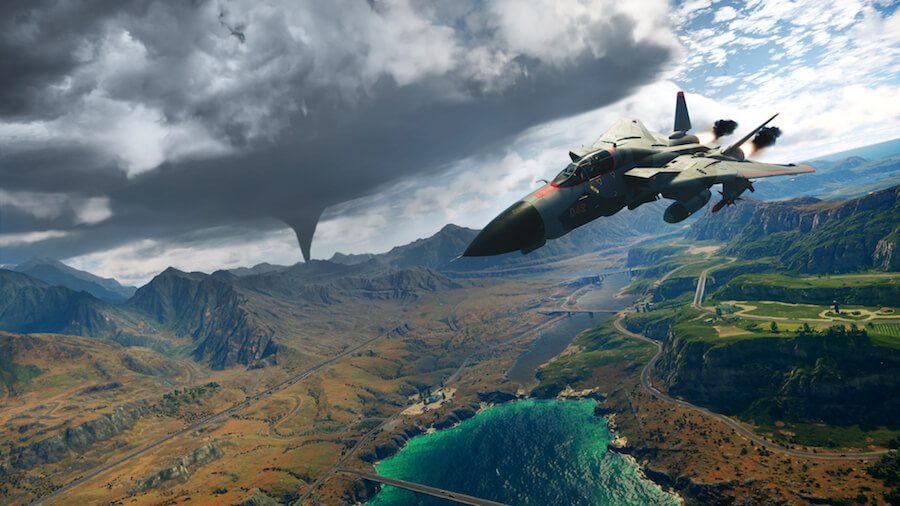 I spent a good hour alternating between watching pedestrians drive right into it (only to be whipped around then flung away) and I also deliberately tried to punch through the tornado to find an eye of the storm that I'm not even sure exists. Honestly, I've played every single Just Cause entry in the series and this emergent little task proved to be the most fun I've ever had playing it. I want the whole game (every racing challenge, every stunt event and every firefight) to be set around this thing.

Seeking the eye of the storm, I first commandeered an enemy gunship and tried dropping directly down through the clouds into what I imagined to be the centre. End result: the rotor blades shredded like tinfoil and the bird exploded, sending my ragdolling (and on fire) body around and around the vortex. It took a minute to let go of me and a new "skydiving record" was set.

Unperturbed I next attempted to punch right through using a stealth micro fighter that was going 360 km/h with its afterburners cranked. End result: the tornado turned me aside and then more or less used my own momentum to judo flip the plane into a nearby mountain.

There were so many attempts, my friends. A civilian bus full of people driven flat chat into it: that got sent cartwheeling into a forest, then death by explosion. 747-sized airliner doing 400kmh/hr, flown upside down for extra style points: wings caught on fire, sucked up into the chute and spat out onto some buildings. Damn it.

Beaten but not unamused, I rounded out my demo by deciding to prank the agency plane that delivers Rico his air dropped vehicles and gadgets. I ventured as close to the vortex as possible and then ordered in a bomb-rigged limousine in, taking care to set the vector of delivery to go into mother nature's angriest storm. Sure enough, an A380-sized dropship barrelled in overhead and was shredded into gobs of flame and twisted Mechano parts as I stood, awestruck, underneath it all. It's pretty rare that I'll murmur an expletive at a TV whilst playing a game. But Just Cause 4 managed to draw a "holy... s—t!" out of me.

Let's be brutally honest here. Avalanche Studios is releasing at the tail end of what has been a remarkable year of gaming, especially for open-world titles. To be competitive it needs to bring something unique and special to the table. I honestly think this tornado, combined with the delicious and nigh endlessly configurable grapple pods, should be more than enough to justify a purchase of this. Fans of wanton destruction really ought to mark Just Cause 4 as a main objective on their mini-maps.

Pokémon: Let’s Go Review: Never gonna give Mew up Farming Simulator 19 review: At the top of its field?