Am I ditching Jetstar over its $30 infant fee? | A couple of travel makers

My seat was $22. My kid's was $30. But despite this price imbalance, is Jetstar still the cheapest airline in Aussie air?

Last week, Jetstar busted out a banger sale – $22 flights to cities all across its Australian network.

We're Stef, D and baby R, a family of jet setters. Together, we've visited 55 countries and are determined to see even more – all while working and paying off a mortgage. We share our tips on how to travel on a budget.

Read our blog: Every fortnight on Mondays here. Follow us: @acoupleoftravelmakers

I dropped everything and started looking for my family's next big adventure. I found tickets to Byron Bay. I had never been and the flight was short enough for me to test it on my now 11-month-old.

I selected my dates, the travellers and 20kg of extra baggage each way (for someone so small, my daughter commands a lot of luggage). Then I got to the payment page only to be hit with this: 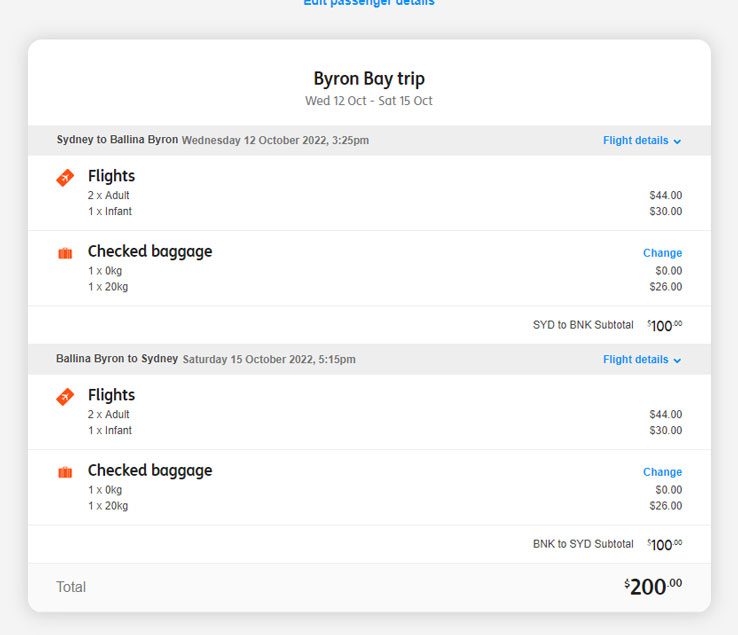 What would have been an $88 flight for 2 had more than doubled by having a child.

But what really rubbed me the wrong way was the infant fee. $30. Each way. Not only was she more expensive than me, but being an infant under 2, she wasn't even paying for a seat.

My lap was now the most expensive seat on the plane.

I was gobsmacked. I was tempted to book my baby her own seat to SAVE MONEY. Don't worry, I didn't. She can't sit in a chair without a harness yet.

Instead, I closed the window. Yes, I abandoned my cart.

And I started to look at alternate airlines. I went to Qantas, Virgin Australia and Rex. All of which DO NOT charge a cent for my daughter to take up space on my lap. And they give me, the paying adult, checked luggage FOR FREE.

Was it the right thing to do for my hip pocket?

Despite the extra fees, Jetstar still came out on top. Granted, $22 seats are super cheap and none of the other airlines had sale fares to Byron. But the closest in price was still $136 more than the budget airline.

The only way I could get a price close to Jetstar was by cashing in my points for a rewards seat on Qantas. This got the final cost down to $108 and 25,600 points, which sounds cheap but is pretty on par with the points value when you consider that 1,000 points are worth $20.

So I guess my family isn't ditching Jetstar quite yet. Though I will be keeping an eye out for sales with my full-service options because some of them do have some nifty perks for little ones.

Who will I be turning to if Jetstar isn't cheap enough?

Looking at the policies for infants under 2, the winner in my eyes is Virgin Australia. With its Lite fares, you can get your costs down quite a bit. Though you'll want to dish out the extra dosh for a Choice seat to get your baby items on the plane for free.

The only thing I have yet to test is how nice they are about priority boarding and seats with bub.

Now offering even cheaper Lite fares, you could snag a bargain on Virgin if you don't need checked luggage. If you do, it's better to pay for Choice fares as the extra fee is the same as if you chose Lite and added luggage (the price in the table above is for Choice seats).

If you're travelling with your partner and really want to shave as many dollars off as possible, you can split your itinerary up, booking one Choice seat with an infant to get the checked luggage and one Lite seat. Though there's no guarantee you'll be seated together this way.

The flying kangaroo comes in at a close-ish second. It has so many perks from free travel to free baby items, but it is very expensive. If I book, it'll be either with points or during a very tasty sale.

The once regional airline has scheduled more popular routes and will likely continue expanding its network around the nation. It gets a big thumbs down from me though for family travel with hardly any extras and a less-than-appealing price tag.

How does Jetstar compare?

For good measure, here's what Jetstar's pros and cons look like:

Want to know more? Read up on a full breakdown of the best airlines for babies and kids here.