Should you fly with a local or international budget airline?

There’s no need to second-guess your flight purchase with this airline comparison between two top budget airlines flying out of Australia, Jetstar and AirAsia. We looked at flight prices, destinations available, customer reviews and extra bonuses offered by the airlines.

By the end of this article, you’ll know if it’s better to fly with a local or international airline for the journey you're planning to take.

To determine which budget airline really does have the lowest price, we compared flights from Sydney to Bali during a popular time of the year for visitors – February – on the exact same dates.

Here's what we found: 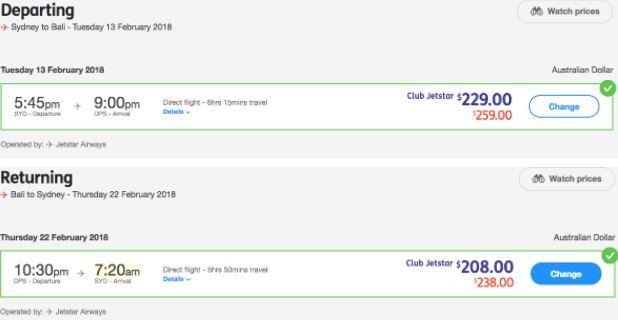 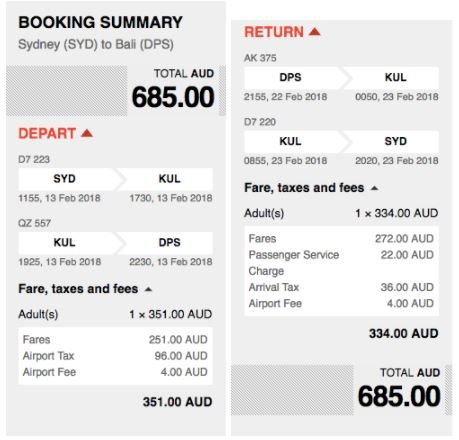 Jetstar comes in with a round-trip price that is $188 cheaper than AirAsia. Those are big savings when comparing two budget airlines in this case.

As this fare was determined on and for a set date, it may not be reflective of any sale fares either airline may have. If you've decided on dates and are driven by price it may be worth browsing both to see which offers the better deal at the time you wish to book.

Is it a good airline to fly with?

Since both airlines are rated 3=stars, we reviewed what customers had to say about each airline on Skytrax to see how Jetstar and AirAsia rated amongst passengers.

When judging by overall ratings, AirAsia comes out on top with a 6/10 compared to Jetstar with a 5/10. In this round, AirAsia wins as it has a high rating – 4 out of 5 stars – for value for money, even though it lacks in other categories such as 1 star for inflight entertainment. It rates average for food and beverages, seat comfort and staff service. Jetstar is average across the board with 2–3 stars in each category.

While both rank in the top 10 for World's Best Low-Cost Airlines with Skytrax, AirAsia has continually won the gold spot for 9 years running.

AirAsia offers the Asean Pass which allows passengers to fly to over 70 destinations in the Asean region without worrying about fluctuating prices as flights are booked using fixed credit. BIG points can also be earned and there are no processing fees. Passes can be bought for 30- or 60-day periods.

Both airlines offer deals so that travellers can find a better flight price. We took a look at each to find out which one has better prices. Both pages give you the option to choose your flight origin and destination and allow you to set a maximum price that you want to spend.

When comparing the functionality of the search availability on each airline’s site, we found that Jetstar’s deals page was much easier to use. AirAsia’s promotions page was more limited in searches. When it comes to prices, Jetstar wins with better deals to the same destinations as offered by AirAsia.

Flights to Bali from $206 return

Verified 2 days ago Expires 10 Feb 2022
Available from 13 March – 13 September 2022 on flights departing from Sydney, Brisbane and more. Sample fare departs from Melbourne with Jetstar.
Get deal

Verified 2 days ago Expires 10 Feb 2022
Available on flights from April – September 2022. Sample fare departs from Melbourne with Jetstar. Other airlines include Hawaiian Airlines from $1,458 return.
Get deal

Up to 50% off: Australia flights from $32 with Jetstar

Flights to Melbourne from $54 return

Expires 31 Jan 2022
Available on flights from January - May 2022, including during Australian Open. Sample fare is Sydney-Avalon with Jetstar. Other flights depart from Adelaide and more.
Get deal

Flights to Fiji from $366 return

Verified 2 days ago Expires 10 Feb 2022
Available on flights until 30 September 2022. Sample fare is Sydney-Nadi with Jetstar. Other airlines include Fiji Airways from $539.
Get deal

Domestic flights from $41 each way

Expires 31 Jan 2022
Available on flights until May 2022 to Christchurch, Dunedin, Wellington and more. Sample fare is Sydney-Auckland with Jetstar.
Get deal

Expires 31 Jan 2022
Available on select travel dates until May 2022. Sample flight departs from Ballina with Jetstar.
Get deal
Was this content helpful to you?
Thank you for your feedback!