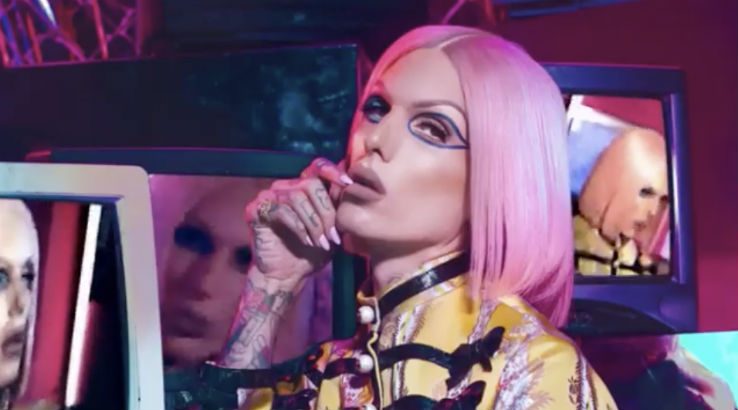 The moment we've all been waiting for is finally here! Please welcome Jeffree Star lip liners and glosses!!

UPDATE: 26/9/10: We're on the home stretch now people. We know when the Jeffree Star Lip Liners are dropping and now we know exactly what they look like too!

Jeffree Star took to his Instagram to reveal the upcoming Jeffree Star Cosmetics Lip Liners and they're just as amazing as we expected. In pencil form, the lip liners look creamy and pigmented as hell.

They feature the standard pink packaging of the brand ad will come in 16 shades of already existing velour liquid lipsticks. We know for a fact that a red liner, Celebrity Skin liner and Leo Liner will be included.

The liners will be dropping to on the 28 September. We definitely think these will be a sell out so mark those calendars to make sure you don't miss out. You can shop Jeffree Star Cosmetics from a range of stockists like Princess Polly who offer next day delivery!

UPDATE 21/9/18: Jeffree Star has been up to quite a bit. He recently announced that the upcoming lip liners would be launching this September. However, he didn't give us a specific date. Until now.

The Jeffree Star Lip Liners are set to launch on the 28 September. This means we only have to wait a little more than over a week to be able to buy matching lip liners to our extensive collection of Jeffree Star Lipsticks.

Just how many lip liners will launch is still unknown as is whether there will be a shade for every existing lipstick shade. We can confirm that there will be a 'Celebrity Skin' lip liner which is easily one of the most popular shades from the brand.

You can purchase Jeffree Star Cosmetics from a range of online stockists including out favourites who also stock an extensive range of beauty brands.

Jeffree Star announced that he would be launching lip liners and glosses and in the coming months. That was about as much information as we got.

However, the beauty blogger has now taken to Twitter saying that we can expect the lip liners to launch as early as next month. He is stated that these are set to be "SO creamy, pigmented and long lasting!" We're hoping that they will match the shades of his already existing liquid lipstick shades. To say we're excited would be a major understatement.

While the shades and lip liners have not yet been revealed he has stated that a sneak peek and reveal will be coming very soon!

I won't lie to you. I'm low-key hyperventilating right now. Jeffree Star, beauty blogger and founder of Jeffree Star Cosmetics has been dropping new products all over the place. Seriously, just yesterday did he introduce four new liquid lipstick shades.

Now he apparently wants all our money and confirmed on Twitter he is launching lip liners and lip glosses. Cue. Absolute. Hysteria.

How do we feel about #JeffreeStarCosmetics lip liners and lip glosses coming soon?

These are the products that we've all sat here praying for. Ever since Kylie Cosmetics and Huda Beauty brought out matching lip liner shades to lipsticks, we've been waiting for Jeffree to do the same. Now, we don't know if they will be matching the liquid lipstick shades but seriously, Jeffree knows what's up and we will be super surprised if they don't.

The lip glosses are a completely different ball game. Will they be new shades? Will they match the already popular ones like Celebrity Skin, Mannequin and Birthday suit? The options are endless and I'm way too overwhelmed.

The confirmation went live to Jeffree's personal Twitter asking how his fans and shopping enthusiasts (myself included) felt about the launch. The answer? Pretty darn good.

He has also hinted at other new products coming soon like a liquid highlighter, foundation and concealers. Again, the beauty blogger took to Twitter to share his excitement stating "I can’t wait to start revealing all of my new products!!! Been working so hard behind the scenes and it’s almost time to start showing the next phase". Show us now Jeffree!!

So when and where can you buy it?

The products that are all "coming soon" are going to be a part of the Summer collection. Jeffree Star has confirmed that the lip liners will be dropping in September.