There's a lot of choice when it comes to true wireless headphones right now, especially in the $200-$300 price range. It's a bit of a sweet spot when it comes to pricing and feature mixes. On paper, the JBL Reflect Flow Pro headphones have a lot going for them, including long battery life, active noise cancellation and IP-rated water resistance.

In usage, they're a decent set of headphones, but their value largely rests on using them as sports-centric headphones thanks to that water resistance feature. 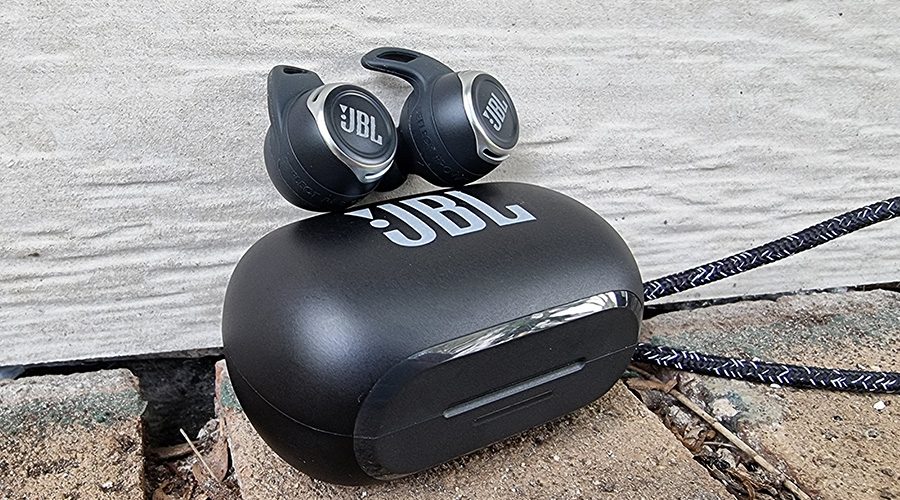 JBL sells the JBL Reflect Flow Pro headphones locally in either a black or white finish in Australia, although internationally there appear to be pink or blue variants as well. JBL sent me the black pair, which come with a rather large battery case.

You might struggle to stuff that into a pair of jogging shorts without looking like you're compensating for something else, but it does also have a lanyard loop attached, so you could more securely hold it while hitting the tracks.

The JBL Reflect Flow Pro are a sports-centric set of true wireless earbuds, but at least for the black pair, there's not much that's all that remarkable about their design. You don't have AirPod style stalks to deal with, but they did protrude out from my ears to a noticeable degree.

The JBL Reflect Flow Pro headphones use a fin style stabiliser, which by now is a very common approach to keeping buds in your ears. They do work well enough even during intensive exercise. 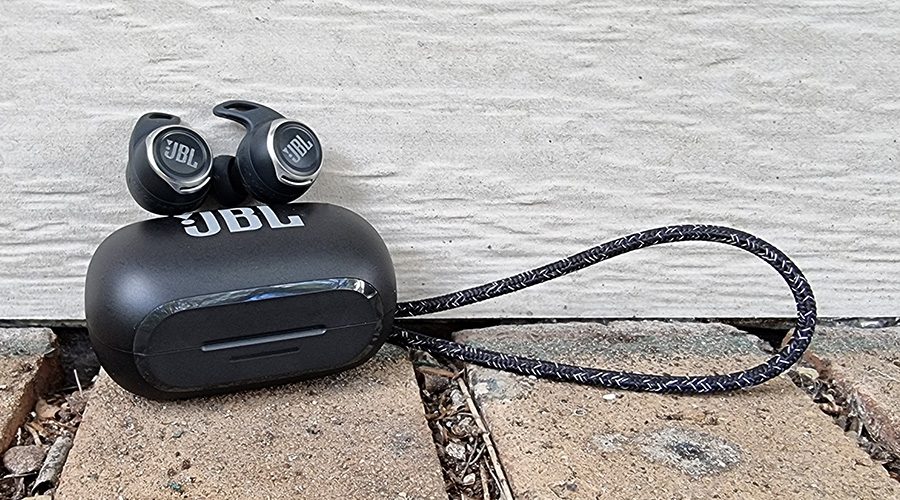 I'm quite used to adjusting my wireless buds while I jog, because the natural motion of my head tends to jar them loose over time. That was still a factor for the JBL Reflect Flow Pro headphones, but I never felt as though they were about to come tumbling out as a result of those stabilisers.

The flip side of that is one that I've hit more than once before with this approach. Over longer wearing periods, having that extra bit of rubber in my ears did tend to become just a little uncomfortable. Your own experience may vary, and JBL does provide small and larger tips and fins to help you work out your best fit.

Would you want to do that?

Probably not, more because Bluetooth tends to work awfully through water as a medium, but it does mean that inadvertent wetness shouldn't be an issue, whether you're caught in a rainstorm or accidentally drop them in a glass of water.

Yes, I did test that, as well as washing them off after a few sweaty runs. I did have to leave them to dry out as you'd expect, with muffled audio if I tried to use them straight away. As a reminder, IP ratings relate to fresh water immersion only. Test them in salty water at your own risk. 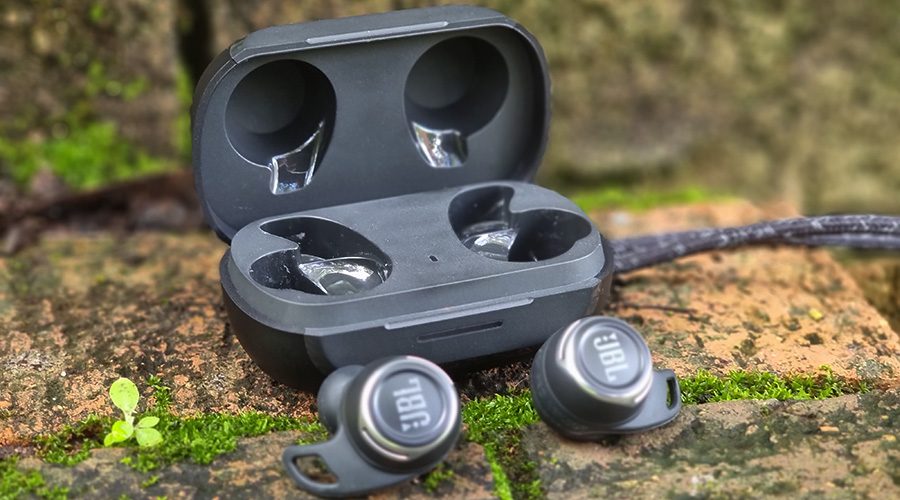 With their sports focus in mind, I tested the JBL Reflect Flow Pro headphones with a variety of high energy music. They're equipped with a pair of 6.8mm drivers that deliver a solid, mostly bright sound with decent levels of detail.

The detail levels of mixed drums and vocals in Stevie Wonder's "Can't Put It In The Hands Of Fate" came through well without losing the lower bass tones that drive the track.

Switching over to a little Prince, "Purple Rain's" slower pace and deliberately echoey vocals built nicely without distortion, though there are still finer headphones out there if audio fidelity is your key criteria.

When listening to the Foo Fighter's "Waiting on a War", the JBL Reflect Flow Pro managed a good balance between vocals and the rising instrumentation through the length of the track.

Listening to a more vocal-centric track such as Suzanne Vega's classic Tom's Diner showed the slight bass bias of these headphones. That's likely to sit well with most users, though, especially if you're using them to drive you along while you work out.

The JBL Reflect Flow Pro headphones also offer active noise cancellation, which I primarily tested while out walking and jogging with them. For the asking price, I'd place them at a fair level rather than great. 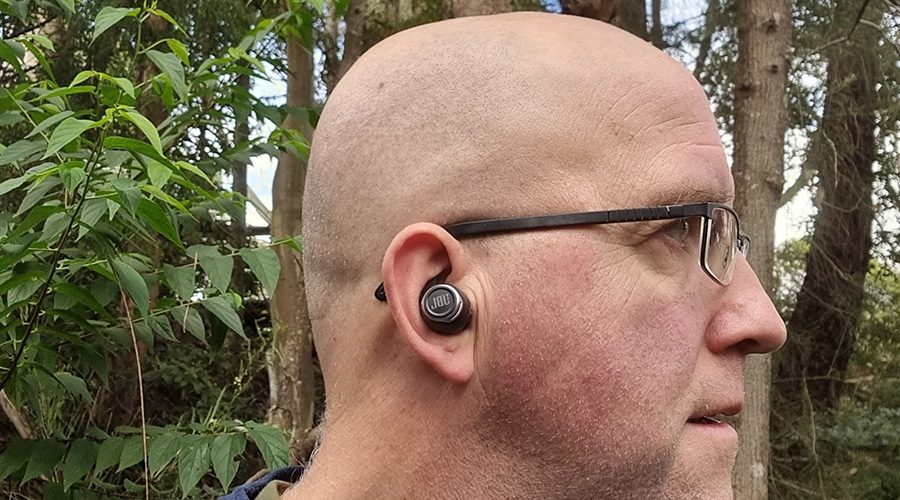 I didn't get the real sense of isolation that I got from my current gold standard in this space, the Bose QuietComfort Earbuds – though to be fair, those are much more pricey buds to pop in your ears.

JBL does offer some customisation of noise cancelling through its JBL Headphones app, with the option for either ambient aware noise cancelling or TalkThru mode, which significantly dips audio volume while boosting incoming microphone input to assist in conversations.

It works, but only to a light degree, and depending on your music choices you're likely to do better just to pause your playback while chatting.

JBL does provide a level of customisation via the JBL Headphones app for iOS or Android, where you can pick preset equalisation curves, adjust ambient sound control, and set the tap and hold gestures for each earbud. Like most tap-and-hold earbuds, there's a definite learning curve to getting it right, especially for double tap actions.

JBL Reflect Flow Pro review: Good long battery life for when you're on the go 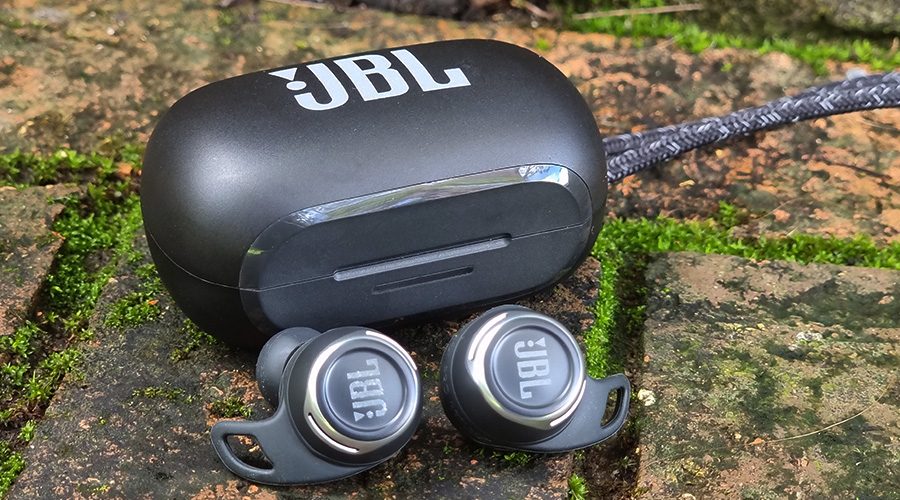 JBL's stated battery life for the JBL Reflect Flow Pro headphones is an impressive 10 hours out of the case, although that is with ANC disabled. If you want active noise cancelling, and I can't think of a good reason why you wouldn't, that will drop to a claimed 8 hours of playback.

It's a claim which stacks up, hitting almost exactly 8 hours in my tests with a variety of music and podcast listening at moderate volume.

That larger battery case does at least pack in a decent quantity of additional battery life, with 20 hours of charging available.

The case itself charges via USB-C or Qi wireless charger, which is nicely flexible, although standard for this price level and above for most wireless buds.

Should you buy the JBL Reflect Flow Pro?

For their asking price, the JBL Reflect Flow Pro headphones deliver on most fronts. Audio throughput is good – but never quite great – and battery life, so crucial for any pair of true wireless buds, is quite good.

Having run and sweated in them, the reassurance that I can wash them off fully is also great.

However, they don't quite match up with what I'd really want from active noise cancelling, even at this price point.

The JBL Reflect Flow Pro headphones retail in Australia for $269.95 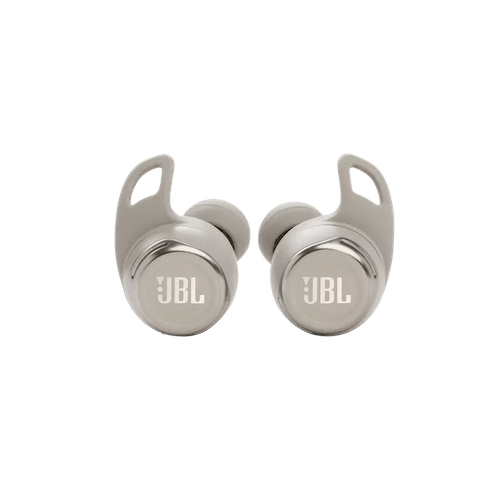 I tested the JBL Reflect Flow Pro headphones over a 2-week period, using them daily to listen to music while I worked, relaxed and worked out, mostly walking and jogging outside. They were tested with a variety of music genres and podcasts to judge them against similar true wireless buds, of which there's no shortage right now.
The pair of JBL Reflect Flow Pro headphones used for review were supplied by JBL.
The reviewer has more than 2 decades of tech product reviewing under his belt and is a multi-time Australian IT Journalist award winner, including awards for best reviewer and best technical journalist.