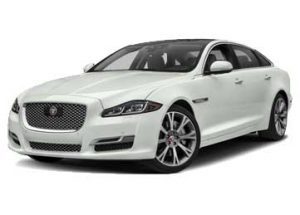 Avg. critics score: 73.33%
3 critics
How did we calculate this? We analysed and aggregated the scores of Car Advice, Car Showroom and Cars Guide to bring you the finder.com.au score. This is a comprehensive score that brings together the three different expert ratings you see below.
finder.com.au is personal finance comparison site that provides you with the tools you need to make better decisions. Learn
how we work and how we make money.

How does the Jaguar XJ compare with its peers?

The Jaguar XJ is an icon of the British motoring industry. The XJ is the model Jaguar describes as its “pinnacle saloon car” – a description which, coming from a manufacturer most of us associate with luxury and opulence, gives you a fair idea of what to expect from this sleek and exclusive model.

The XJ has been on sale in Australia for some time and has been generally well received by local motoring journalists. Not only is the XJ beautiful to look at, it’s also comfortable, well equipped and impressively fast. It also comes with that old-world British charm that the Jaguar badge is famous for – charm that has swayed plenty of buyers who’ve grown to love the manufacturer over the decades.

However, in the face of stiff competition from a number of newer and well-credentialed rivals, such as the Mercedes-Benz S Class and BMW 7 Series, does the Jag still have what it takes to earn a place in your garage?

Let’s take a closer look at what the reviewers said to find out.

Before diving into the details, we should take a moment to give the XJ a once-over from a purely aesthetic standpoint. The XJ's sleek, dynamic look impressed all the reviewers.

Described as being well-proportioned, the XJ's exterior was a little controversial in some circles when it was first introduced in 2009. But thanks in part to a mid-life revamp, it still looks modern and easy on the eye.

From the aggressive front grille to its extended length and unique looks, the XJ has an imposing presence that helps set it apart from its main rivals.

Under the bonnet, the XJ comes with either a petrol or diesel engine. At the entry-level end of the spectrum (by Jaguar standards), you get either a 221kW V6 turbo diesel or a 250kW supercharged V6 petrol. The petrol variant boasts 450Nm of torque and will be better suited for urban drivers, while those who cover more ground out on the open road will likely prefer the diesel. The diesel’s official fuel consumption figure of 6.1L/100km – as opposed to 9.1L/100km for the petrol – also drew praise.

If you really want to crank it up to 11, the XJ is also available with a 5-litre V8, tuned for 375kW/625Nm in the Autobiography or 423kW/700Nm in the XJR575. Delivering impressive acceleration and power, the V8 attracted the thumbs up from reviewers. However, with official fuel consumption of 11.1L/100km, it’s a little too thirsty for some.

No matter which engine you choose, it’s paired with an eight-speed automatic transmission that powers the rear wheels. Stop/start technology is also included to improve fuel efficiency.

If you’re a keen driver, the reviewers unanimously agree that this is a car which will make you feel right at home behind the wheel. At 5.13 metres long (standard wheelbase models) and far from a lightweight, the XJ doesn’t look like it will be overly fast or agile. But looks can be deceiving, and this British cruiser thrilled reviewers with its engaging and exciting on-road performance.

Steering is precise and communicative, and the XJ demonstrates poise and excellent control on a variety of surfaces. It’s a balanced and confidence-inspiring drive, and one that might have you seeking out a winding back road on your next Sunday drive. The eight-speed transmission is similarly refined and responsive, equally capable of handling leisurely cruising as well as being driven with a bit of oomph.

That said, some reviewers pointed out that the XJ is perhaps not as smooth and comfortable on rough surfaces as some of its competitors – part of the trade-off of choosing a saloon designed to offer excellent driveability rather than simply the ultimate in luxury.

Step into the Jaguar XJ and the luxury on offer immediately becomes apparent. The seats are comfortable and wonderfully supportive, while everywhere you look you can see plush carpets, smooth leather and tasteful finishes. The reviewers also liked the hint of retro style to be found in the Jag’s interior.

The InControl multimedia system isn’t perfect but is reasonably intuitive, while sat nav, DAB+ digital radio and Bluetooth are all included. Seats come with heating and cooling and you can adjust them in a wide variety of ways – they’re adjustable 14 ways in the Premium Luxury and 18 ways in all other models – while all except the standard wheelbase Premium Luxury get four-zone climate control.

Moving to the rear stalls, there’s ample room for two people and you can carry three easily enough, but the transmission tunnel limits the room available for the middle passenger. Long wheelbase models in particular offer acres of space and a luxurious amount of legroom. Boot space weighs in at 520 litres, and there’s a space-saver rather than a full-size spare tucked under the boot floor.

However, one criticism was the fact that some of the buttons and switches in the XJ feel a little cheap when compared to those on offer in its premium rivals. There’s also a smidgin more road noise and roughness than you’ll find on the Mercedes S Class, but it’s nothing to write home about.

In terms of safety, there are front and side airbags for the driver and front passenger as well as side curtain airbags. There’s plenty of safety and driver assistance tech as well, including emergency brake assist, lane departure warning, blind spot assist and low-speed cruise control for low-traction conditions. Unfortunately, the XJ hasn’t been given an ANCAP safety rating.

All things considered, the reviewers were largely impressed with the Jaguar XJ. With dynamic performance and on-road handling, this luxury tourer offers an involved and enjoyable drive. It’s also ridiculously comfortable, comes with a good range of standard inclusions and will attract plenty of admiring glances wherever you go.

One other major positive singled out by the reviewers is the XJ’s uniquely fun character. It boasts more personality and individuality than some of the German competition, providing a memorable driving experience in what can sometimes be a conservative class.

It’s not what you’d call cheap, but if you’re in the market for a top-spec luxury saloon, then the $200,000-plus price tag isn’t going to phase you. However, you may be tempted by some of the Jaguar XJ’s main rivals – the Mercedes-Benz S Class, BMW 7 Series and Audi A8 all offer comfort, refinement and luxury, not to mention a number of high-level tech features.

You’ll most likely want to consider these options, as well as other contenders such as the Maserati Quattroporte, the Porsche Panamera and even the Lexus LS, before deciding whether the Jaguar XJ is right for you.

Compare some options to finance a 2019 Jaguar XJ