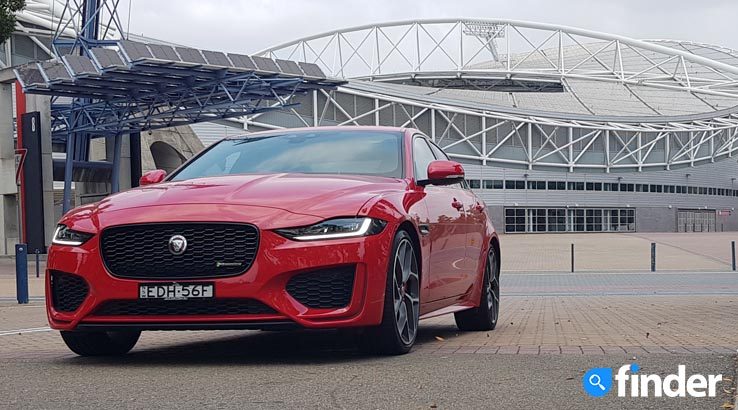 The Jaguar XE is a luxury sedan to get XE-cited about.

Since its launch back in 2015, the Jaguar XE hasn't had the best time on the sales chart. But with a significant upgrade, the XE is back with the German brands firmly in its sights.

Designers refined the styling, culled the unloved variants and the company dropped all engines bar a petrol power plant in an effort to mix things up.

The MY20 XE has a more aggressive look to it than the model before. Its redesigned front end sports a wider grille, housed in a new bumper. Additionally, the British brand added new headlamps with the signature "J" blade daytime running lights. The lights are also slimmer, which not only make the pointy end of the vehicle appear lower, but also successfully make it match the scowling trend of its competitors.

Moving to the back of the XE, there have been some changes too. A new bumper has been designed and fitted with the aim of giving the vehicle a wider stance as well as aiding aerodynamics.

Coated in "Caldera" Red (a $700 option), our review car was accented with the black exterior pack, an $840 option that I would suggest considering regardless of the colour you choose. There have been several updates in the cabin. Perhaps most notably is the inclusion of Jaguar Land Rover's Touch Pro Duo command system. The system comprises two screens: one acts as your infotainment system, while the second replaces a number of other buttons and dials that traditionally control climate, seat heaters and a range of other functions.

Apple CarPlay and Android Auto are included as standard on the HSE and the entire set-up is channelled into an 11-speaker Meridian sound system to ensure the audio-visual experience is up to scratch.

It is a clean and crisp system to use.

Jaguar's $1,710 "technology pack" was ticked on the option sheet too, which meant we had a smart rear-view mirror (a camera looking out the back relaying a feed to the mirror screen) in addition to a solar attenuating windscreen, a wireless device charging dock and a head-up display.

Getting comfortable is incredibly easy thanks to 16-way electric-adjustable, perforated leather seats in the front – they're comfy and supportive too. Unfortunately, the same cannot be said for the back. If you are on the taller side, legroom in the rear can be a bit cramped, with headroom also proving a little scant if you are around the six-foot mark.

Sitting behind the R-dynamic emblazoned wheel, there is a large, customisable 12.3-inch digital instrument cluster. You can tweak this to include trip metrics, audio multimedia information or even the satellite navigation (which may prove handy when a passenger is tapping through all the different functions of the Touch Pro Duo).

There is a traditional automatic gear shifter too, with the rotary dial making way for an F-Type inspired component.

Throughout the cabin, there is a decent amount of storage space with cubby holes in the doors and the centre console has enough room to store snacks for a long trip.

Front and rear passengers have access to their own drink holders, with the rear ones neatly tucked away in the fold-down centre armrest. 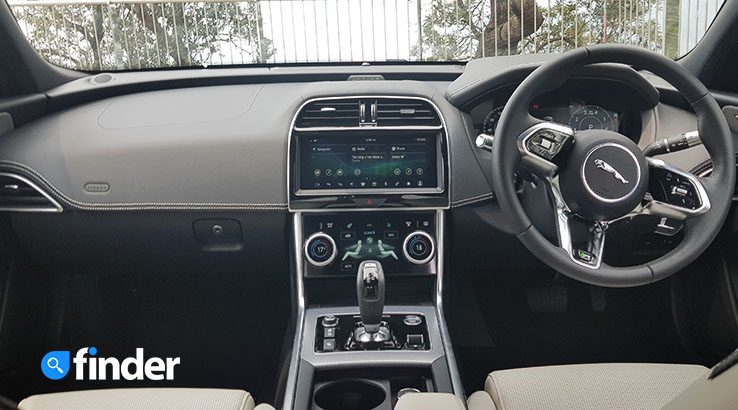 Jumping in and pressing the ignition button, the systems and screens obligingly fire up in the car, as does the head-up display. Clearly projected on the front windscreen, it can be yours for $1,300.

The 2020 Jaguar XE is powered by the 2.0-litre four-cylinder turbo (P300) petrol engine which is connected to an eight-speed automatic transmission. There are a number of configurations you can select, including Comfort, Eco, Rain Ice Snow, and Dynamic. The latter not only adjusts transmission and throttle response but ride and handling characteristics too. If you are anything like me, you'll end up in Dynamic nine times out of nine.

That is because it is a spritely little engine, producing 221kw of power and 400Nm of torque – which are ample numbers. For comparison, the 2.0-litre turbo-petrol four under the bonnet of the BMW 3 Series produces 31Kw less.

Hitting the twisty stuff to test the steering, the Jag gives you a feeling that it teeters on the edge of a sports car and luxury sedan. Steering is really well balanced and decently weighted, if not slightly on the light side at low speeds.

Cruising at low speeds, the ride of the HSE was on the harsh side, and I'm notching this up to the low-profile tyres. 20-inch rims were optioned on our XE (yours for an additional $1,300) and they did create some road noise. On the other hand, the ten-spoke, diamond turned, satin grey alloys look the part.

Although adults may not be too pleased about being thrown in the back, if you are carrying younger passengers, there is plenty of room and two ISOFIX mounting points on the outboard seats.

The 410 litres of boot space leaves a bit to be desired too. The XE is 70 litres down on the BMW 3 Series and Alfa Romeo Giulia for instance.

Two USB ports are present as well as a 12-volt outlet in the back.

Front and rear parking sensors, along with the high-resolution reversing camera make manoeuvring the XE in car parks and tight spaces a breeze too. 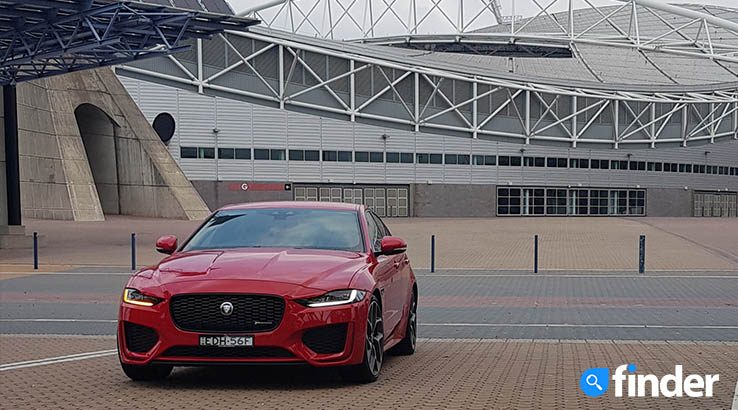 What safety features will I get standard?

In terms of airbags, the 2020 Jaguar XE HSE comes with the following:

From a technology standpoint, you get the following (and more) as standard:

The Jaguar XE HSE is punchy, thrilling to drive and beautiful to look at. In its latest form, it is packed with tech and has a well-finished, luxurious interior.

When you compare the XE with its competitors – which you see everywhere on the road these days – it certainly looks a much more compelling proposition.

If you are searching for a luxury sedan, book a test drive in the XE at your local dealer. We'd recommend having a think about the height of the people who may be sitting in the back regularly since you'll want to make sure they'll have enough room.

Not quite sure if the Jaguar XE is for you? Check out our car reviews section.