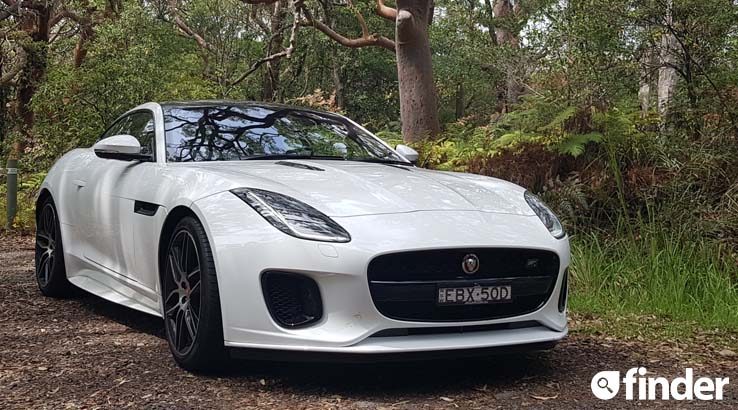 When it first launched in 2013, Jaguar said that the F-Type was the most important vehicle they have brought to market in almost 50 years, adding that Jag without a sports car is like Sydney without an opera house.

And it is hard to argue, with the F-Type going on to become not only desirable, but almost an emblem of the brand. It is the model that is probably more often the car people think of when they think of Jaguar, after the iconic E-Type of course!

Continuing on this modern-day tale, the British car maker has recently announced its new 2021 Jaguar F-Type. Having caught a glimpse of some photos, it is a handsome looking thing and nothing to turn your nose up at.

The MY20 Jaguar F-Type here is the Chequered Flag Edition, which comes with the price tag of $180,990, before you factor in on-roads and options, of which this beasty had a few!

On release of the Chequered Flag Edition, Ian Callum, Director of Design said that the model represented a doubling down on the details.

"In creating the Chequered Flag we've focused on details which enhance F-TYPE's presence and promise of performance – and in doing so, made a fitting celebration of 70 years of beautiful, fast, Jaguar sports cars," Callum wrote.

To do so, designers added a black contrast roof and a Windsor leather interior with performance seats, complete with chequered flags embossed into the headrests. There's also a dark, brushed aluminium centre console as well as a continuation of the chequered flag branding and a leather band to mark the 12 o'clock position on the steering wheel.

That is in addition to some exterior badging that sets it apart from other F-Types.

Jaguar lent us a Fuji White vehicle complemented by 20-inch, six split-spoke, gloss black finish wheels and a matching black panoramic roof. Have a go at it below. 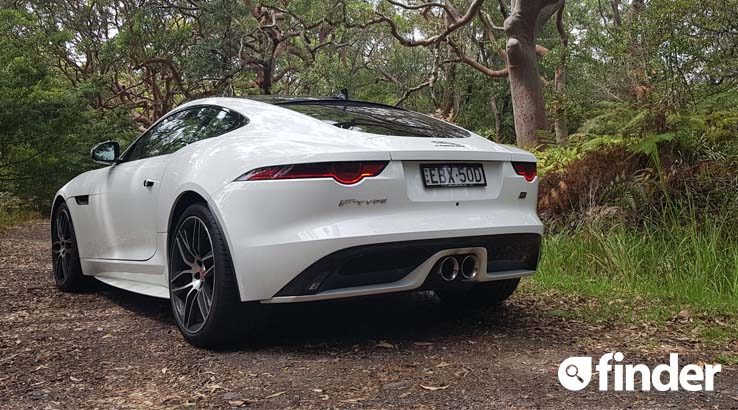 It feels every bit like a premium sports car. There is leather everywhere, chequered flag branding and a red stripe at the top of the steering wheel to complement the red seat belts fastening you to the racing seats. Its low driving position and overall ride height heighten the experience of getting behind the wheel.

As far as what is inside the F-Type, you get Jaguar Land Rover's Touch Pro Infotainment system, which, as I've mentioned many times before, is iPad-esque. It comes loaded with Apple CarPlay and Android Auto. DAB being optional is an ongoing gripe with JLR vehicles as this will set you back $640. It is hooked up to an as-standard Meridian sound system, which delivers some punch for a two-person cabin.

Dual-zone climate control was optioned on our F-Type review vehicle for $1,040, along with a panoramic roof costing $2,110.

A wireless phone charging bay sits below the infotainment/climate controls and there are twin USB ports in the cabin.

In terms of storage space, there isn't all that much. You get a small door bin each and a netted area down in the footwell to store other bits and bobs. But it's a two-door sports car, so that comes with the territory. As you approach the F-Type, the key stays in your pocket, and you hit the button on the handle to open the car. You might think that this is a bit of a gimmick since the handles, which normally sit flush with the body, could already be popped-out and ready to open. But you'll resist the urge, as you know that you have paid $1,200 to have keyless entry on a $180,000 car.

Once you're buckled into the leather racing seats, with the red seat belts across your frame, and you fire up the engine, you're greeted by a low grumble as it idles from cold. I was actually expecting a bit more of a symphony from the Chequered Flag Edition F-Type, but it does sound better on a warm start-up.

You also get a little button you can push that makes the exhaust louder, but it should work in reverse. It should default to loud and you only press it to tone it down.

Then you start getting the seats in position. Our 12-way power-adjustable seats could save and remember settings but again, come with a price of $2,010. The controls are mounted on the door and are easy to find in order to adjust the seats. It's a good spot for them and saves you messing about next to the seat with little visibility. Passengers commented on this.

Using the car around Sydney, you will find the suspension is fairly firm, adding a sporty dynamic to match its looks both inside and out. With that being said, you could use this as a daily driver and be happy. Once you get on more course roads and surfaces though, you are going to feel every rattle – this isn't the car to take camping.

But, to be honest, I am not sure I'd want the ride any softer. It would alter the purposefulness of this thing – there are other vehicles for that in this price range.

A 3.0-litre supercharged V6 engine is used to get the coupé moving. It is capable of getting to 100km/h in 5.5 seconds, with all 280kW of power and 460Nm of torque being sent to the rear wheels.

Sitting between the rear diff and the power plant is an eight-speed gearbox, which went about its business without any fuss. The transmission sends propulsion rearwards as needed without any real questionable decisions at low or high speeds.

The combination of the V6, a stiff suspension set-up as well as a torque vectoring limited-slip diff and the $1,690 optional 380mm/3376mm (front/back) brakes imbue you with more than enough confidence to go through corners in a spirited fashion, with very few surprises between turning in and coming out the other side.

Our time with the vehicle was spent in both the city as well as on a country run out to Lithgow. The result was a fuel reading of 9.5 litres used per 100 km, a bit short of the 8.6-litre claim, but I am willing to admit the pedal did stay in close proximity to the floor on more than a few occasions. 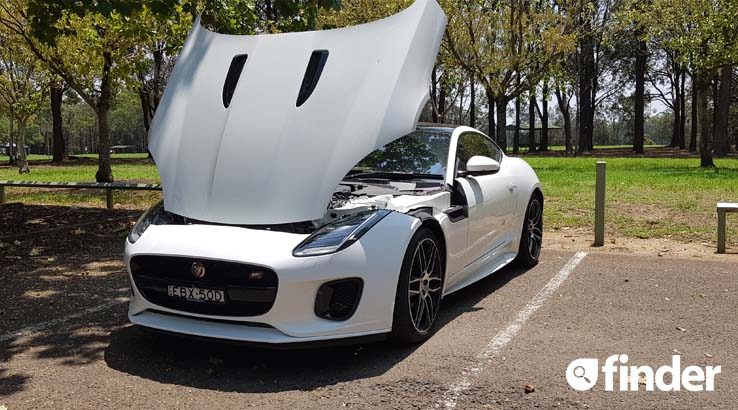 It is practical for the type of buyers this thing will appeal to. Obviously, you can't compare it to an SUV.

In terms of convenience, you can have a powered tailgate if you are willing to fork out $1,160 for it.

Boot space is actually pretty impressive too for a sports car such as this and with its shaping, you could easily get suitcases and overnight bags in there.

You don't get a spare tyre with the F-Type, just a tyre repair kit, to save weight.

In order to be confident of getting your money's worth out of those rear tyres, you need to know if the F-Type is safe. You get the following safety systems on the vehicle:

The Jaguar F-Type Chequered flag edition is a car you are going to want to show off. You don't see many F-Types on the road, so it is a vehicle that stands out. It is a strong performer too, with a setup that inspires confidence when putting the pedal down, but it remains comfortable enough to hop in and drive for hours.

This big cat does come at a price though.