Is Thermomix worth the cost? | finder.com.au

Is Thermomix worth the cost?

Everything you need to know about Thermomix

Thermomix is a unique all-in-one food processor. It weighs, chops, blends, grates, cooks, steams, and whisks amongst other cooking tasks, and all within one space-saving technological revolution. But, with a sizeable price tag, the Thermomix is not something to be bought on a whim. We’re on hand to help you make the decision on whether or not this kitchen investment is right for you.

How to decide whether a Thermomix is right for you

With an ever increasing stigma on Thermomix technology, there are a few things you’ll want to consider before investing in this pricey piece of equipment.

We’ll outline the benefits and the drawbacks a Thermomix presents and take you through a detailed exploration of it to help make your decision easier.

So, what can a Thermomix actually do?

Thermomix is famed for making every element of cooking and prep work easy. It can weigh, chop, blend, mix, grind, grate, cook, steam, whisk and knead, as well as much more. And all of this within one compact appliance. Say goodbye to drawers full of kitchen equipment that you use once in a blue moon, and say hello to a handy all-in-one appliance.

Whilst the limits of a Thermomix can seem endless, here are some of the things it can’t offer.

Thermomix has received a lot of media speculation over the past couple of years after a series of burn accidents relating to their earlier model, TM31, that resulted in the recall of some of the machines sold in Australia. After the recall, a newer model, TM5, was released and there have been very few negative remarks regarding this latest release.

The ACCC have taken Thermomix to federal court over alleged accusations that they made customers sign non-disclosure agreements – preventing them from saying anything negative about Thermomix – before they could were allowed a refund on recalled products that were responsible for some serious injuries. These charges are in relation to the safety of the TM31 model that was recalled in September 2014. Quite a number of scalding incidents have been attributed to failure of the faulty sealing ring on the mixing bowl, which Thermomix have since advised are meant to be replaced every two years. It turned out that apparently only a small percentage of Thermomix owners are aware of this hazardous detail.

Studies have shown that the TM31 model lacks a safety feature that's built into a number of the latest models. The feature in question is designed to prevent users from blending potentially scalding fluids at high speeds

The TM31 Thermomix is said to still be safe to use providing you commit to replacing the seals at regular two-year intervals. The replacement sealing rings cost approximately $15, which is a relatively small price to pay to ensure user safety. That said, many have argued that this cost should be incurred by the manufacturer, rather than the customer, as it was not advertised freely prior to the recall.

Aside from the 87 separate cases that have been referred to the ACCC resulting from the TM31 Thermomix model, there have been very few incidents reported. As such, three years later it’s almost safe to say that the issues resulting in users being burned have been resolved effectively by Thermomix in their TM5 model. The new machine did not add any further components into the cooking abilities of the TM31. The changes instead addressed the operating system of the machine.

The Thermomix TM5 features a colour touch screen and more intuitive controls to make cooking easier than ever before. It uses built-in recipe chip technology for easier than ever “Guided Cooking” and was the first of its kind in the world.

Thermomix - where to buy and what’s the cost?

Thermomix is sold in Australia exclusively by independent Thermomix consultants. You can book an in-home demo to fully understand and experience the benefits and versatility of Thermomix technology.

The price of the Thermomix in Australia is $2,089. And the company offers several payment options which makes Thermomix more affordable and accessible for everyone.

They offer the choice to:

You can book your TM5 cooking experience by clicking here.

Where to buy a second-hand Thermomix

Thermomix can also be purchased second hand in Australia through sites like Gumtree and eBay . And, if you’ve got one you’re willing to sell, these are the best places to list them. Depending on how old and well used your model is, you can sell it for up to $800 (if it’s immaculate).

We’d always advise on purchasing a brand new model, however. At least that way, if anything does go wrong, you have the manufacturer's warranty – which includes the Varoma and the Recipe Chip and covers you for 24 months for personal use and 12 months for commercial use.

Thermomix is sold in Australia exclusively by independent Thermomix consultants. You can book an in-home demo to fully understand and experience the benefits and versatility of Thermomix technology.

The price of the Thermomix in Australia is $2,089. And the company offers several payment options which makes Thermomix more affordable and accessible for everyone.

They offer the choice to:

You can book your TM5 cooking experience by clicking here.

Thermomix is manufactured by Vorwerk, an international diversified corporate group whose headquarters are in Wuppertal, Germany.

They have developed and honed the features and safety features of their latest model TM5 to include the below.

Thermomix. What’s in the box?

When considering such a pricey purchase you’re probably wondering what’s included. We’ve outlined what’s included and detailed any of their special features for you: 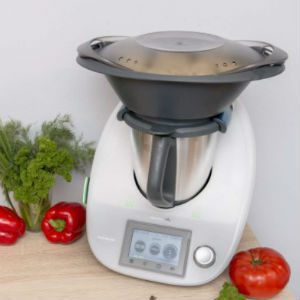 Is a Thermomix worth it?

This space-saving all-in-one kitchen utensil will not only declutter your work surfaces, but will also revolutionise the way you cook. It offers “Guided Cooking” that helps you get to grips with using your Thermomix, as well as suggesting new recipes that you might never have imagined trying before. The Thermomix is surprisingly compact and has minimal parts. It is designed to live on the kitchen worktop and can be ready to use whenever you need it.

The Thermomix allows you to cook hands-free and so frees up some of that much needed time you’d usually spend slaving over a hot stove. Simply set the timer and any necessary stirring settings and walk away confident in the knowledge that your food will be cooked to perfection upon completion.

So, in conclusion, we’d definitely say that the pros outweigh the cons in the case of the Thermomix. It’s an appliance of utmost convenience. But, only you can decide whether it would work for your lifestyle and needs. If you adore the process of cooking, stirring and tasting, while indulging in a glass of wine, then the Thermomix probably isn’t right for you!

The best place to find new recipes for your Thermomix online is the Thermomix Recipe Community. They have over 24,000 recipes on offer which means you can pretty much find whatever you’re looking for. They also update their database on a daily basis, and so if you’re looking for inspiration there’s always a starting point. Another place to find recipes for your Thermomix is at Thermobliss. Thermobliss is an independently run site established by two friends, Lauren and Lucy in 2014. They set themselves the goal of creating a website that solely focuses on easy family-friendly recipes for the Thermomix.

Thermomix cookbooks are readily available from several book retailers. You can purchase the Everyday Cooking for Thermomix Families and recipe chip for the TM5 model direct from Thermomix here. The kit is priced at $80. T M Essentials also offer a variety of cookbooks that are compatible for use with your Thermomix. Their books include Merry Christmix, Souper Bowl and Family Fare. You can view their complete Thermomix bookshelf by clicking here. Prices range from $22 up to $69.95, and with some purchases you will also receive an Ebook copy too.