Is it too late to invest in Bitcoin? Let's take a look at what history says about investing in Bitcoin, and what hints it has for the future.

Bitcoin (BTC) has just broken through its previous all-time-high price and continues to set new records in 2021.

It started the year at US$30,000, before setting a record high of US$64,000 in April, and recently eclipsed the April record to US$67,000 in October, with potential for further growth before the year is out.

Understandably, such big price movements can seem daunting for those just entering the crypto space, and many may be wondering whether they missed the boat.

While everyone's circumstances are different, and you need to consider your unique financial position before investing, Bitcoin is still within reach for many.

First things first, know that everyone has grappled with the question of whether they are too late to invest in bitcoin.

Ask yourself this: if you are planning on holding bitcoin for 5-10 years, or even until retirement, will it matter if you bought at $30,000 or $60,000? Chances are, you are buying it because you expect it to grow even further over time.

So, let's start at the top, pun intended. 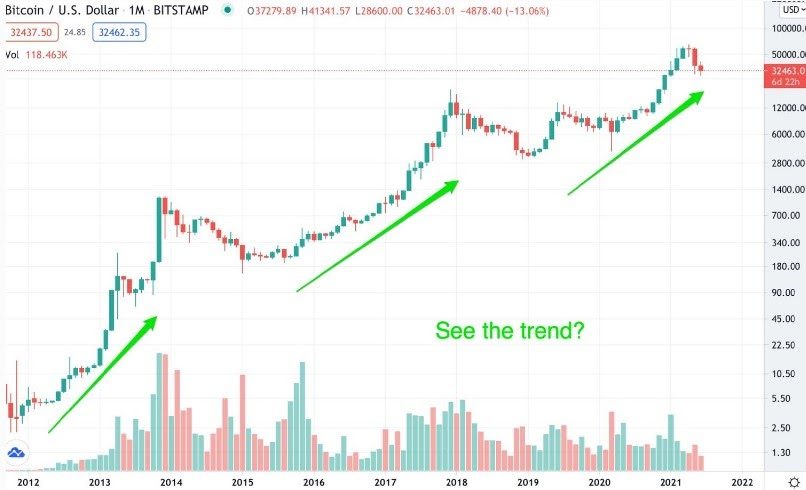 When in doubt, zoom out.

As we can see, bitcoin is in a year-long uptrend. Let's dig a bit deeper and explore the numbers.

Say you bought the top during the 2013 rally. The price of Bitcoin was around US$1,200 in November of that year. Then, the subsequent downturn would have kept you under water for more than three years until you broke even.

This might seem unbearable, but let's look at what happened next. Bitcoin broke into the 2017 rally, and you went from three years underwater to a 16X gain, flying from US$1,200 to a top of nearly US$20,000.

Moving forward, let's say you bought the all time high in 2017, at around US$20,000. You would have been underwater also for roughly three years, until the end of December 2020.

Once it broke through that all-time high, you would be at a 3X gain as of right now, and the October rally has only just begun.

It's important to keep in mind we are using the absolute tops of cycles as our measuring stick. There are cycles within cycles, and although some might get stuck buying at the top before a downturn, the majority won't get caught holding a loss for that long. That being said, you need to be prepared to hold on to a loss – for up to three years if previous cycles are anything to go by.

Charts, however, only tell one part of the story. And since Bitcoin doesn't exist in a vacuum, let's see what other aspects of the global economy might influence it.

Inflation is on everybody's mind at the moment. We have seen massive spending from governments around the world, and that inevitably brings price spikes on all sorts of goods and services.

Unfortunately, it seems like this trend will continue, which means our dollars will have even lesser purchasing power in the future, which could mean further interest in Bitcoin as a protection against inflation, and runaway government spending.

Bitcoin is touted as a hedge against inflation, which we are seeing play out in real-time, as investors large and small are looking for a safe haven asset.

The next big news story that broke recently was the approval of the first ever Bitcoin ETF.

After eight years, accredited retail and institutional investors that were sitting on the sidelines and didn't want to dabble directly with this risky new asset class can now do it from the comfort of traditional investment vehicles.

The ETF has already brought a new wave of investment to the market, with a record-breaking US$1 billion traded on the first day of operation. As a possible sign of what is to come, gold has witnessed a near 400% increase since the launch of the first gold-backed ETF in 2003.

Bitcoin has its eyes on larger fish though. This year we saw the unbelievable news out of El Salvador, making it legal tender in the country.

This puts pressure on other nation-states to develop their own strategy with regards to Bitcoin, as it becomes increasingly popular among citizens around the world.

Brazil, Paraguay, Ukraine, and several other countries have unofficially announced interest in legal tender laws similar to that which we have some from El Salvador. Another trend in the making.

Last but not least, is the Lightning Network. This is a scaling solution designed to make everyday payments with Bitcoin fast, effective and cheap. This year it is growing at an exponential rate, and it is bringing bitcoin to the masses. The Lightning Network is used for small, everyday payments with BTC. Source: Glassnode

The Lightning Network has seen 3X growth in the amount of BTC it holds over the past year, and the trend shows no sign of slowing. This indicates that Bitcoin is maturing beyond a tool for speculation, and may actually begin to fulfil its promise of becoming an everyday, global currency.

However, with all the excitement and upgrades happening in and around bitcoin, it's always important to step back and assess the potential risks. Because they do exist.

The main issue bitcoin might encounter over the coming months and years would be a legal challenge from governments. We are yet to see a real push from regulators, but whispers in the bush say they might be preparing new rules and regulations.

This could mean anything from increased Know-Your-Customer (KYC) regulations for any type of service provider in the market, to prohibiting certain services from operating. Nothing too concerning has happened yet, but that doesn't mean it can't.

On the other hand, although bitcoin has reached near-total censorship resistance on the protocol level, individual users are still very vulnerable. Bad privacy practices alongside poor account management are both important factors for new and veteran bitcoin holders. Do a proper assessment of your daily digital practices, and take all the necessary precautions when dealing with bitcoin.

With all that being said, it's never too late to buy bitcoin. Sometimes you might think you are buying the top, but if you zoom out and take in the context, this new asset class is primed for continued growth over the next decades.

When investing in bitcoin, you should take a long term approach to it, rather than a short term trade. Buying bitcoin at $66,000 might look expensive today, but if these trends are to continue, we may be in for much higher prices. Consider looking into dollar-cost averaging, a strategy that lets you build your portfolio in small increments, without much concern about what the price is doing on any given day.

Do your own research, create a strategy, and make informed decisions. That way, no matter what price you are buying, you will be doing it with solid conviction.