Meet the robot vacuum for anyone too busy to do the housework but who still wants the benefits of a shiny, mess-free floor.

It used to be that a decent robot vacuum was a true luxury item in the home. Even when compared to high-end vacuums, robot-suckers that roamed your house looking for dirt in the floors were prohibitively priced and remarkably underpowered.

But between then and now, something happened. They became simultaneously smarter, and more affordable all at once. So much so that the iRobot Roomba 690 is the do-everything, set-and-forget vacuum for everyone.

How does it tackle dirt?

Much like Roomba’s robot-cleaning discs of the past, there’s not much difference appearance-wise when it comes to the 690. The improvements are all under the hood.

An iterative update to its previous generation, the 690 is the best all-rounder you could hope for in a robot vacuum that won’t break the bank.

Using its "dirt detection" technology for messy floors, it’s a killer ground drone that sucks up stuff you had no idea was there and stores it in its own internal compartment where it stays until you're ready to bang it out into the bin.

The reason this vacuum is particularly effective (especially compared to other robot vacuums I've tried) is the "dirt detection" technology that directs the Roomba to repeatedly travel sections of the floor it senses are particularly dirty. When it comes time to empty, everything comes apart with clicks and latches for super-simple unit cleaning: no screwdriver or sharp leverage required, making the process of emptying it out remarkably user-friendly.

How well does it move around the room?

It even schedules regular cleans for you by creating its own daily cleaning regimen inside the iRobot app. At 9am every morning, Moe (named for the cleaning robot in WALL-E) pushes back from his dock under my office chair and cleans the whole two-bedroom, carpet-and-tiled-floor apartment in a single charge.

It vaults ledges like the one between my carpets and my bathrooms with ease thanks to its meaty-looking all-terrain wheels, and delivers you an update to your phone if it’s ever in distress. There have been a handful of occasions where the vacuum managed to trap itself under a chair, but mostly it climbs over obstacles and cleans the floors without interruption.

Once done with the job, it finds its charging plate incredibly well via an infrared beacon on both the vacuum's nose and its home base, where it recharges its surprisingly efficient 1800mAh battery. 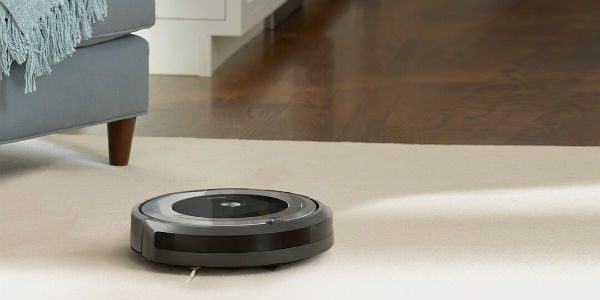 I'll admit, the Roomba loves to eat *everything* in its path. If it can run it over, it’s going to get jammed inside the brush heads. That means while dust, hair and crumbs all get sucked into the Roomba, so do things like clothes you’ve left on the floor, low-lying cables and other such items.

The Roomba won’t damage floor-prone items in any way – it’ll send you a notification telling you it’s eaten something it shouldn’t have before that happens – but it means you have to have the floor clear for its jobs every single time it goes out. This isn't so much of a hassle for me but will probably be a challenge if you have a family with children.

However, iRobot actually came up with a sort-of solution to this issue. The 690 comes with an IR occluder: a device that creates a virtual line the vacuum can’t cross. If you want to keep it out of a room or if you want to keep it away from something like an animal’s food or water bowl, you can set an invisible "fence" that it won’t cross when the IR beacon is active.

It’s good, but keep in mind that if your kids are leaving LEGO all over the house, you’ll likely find one or two in the Roomba container when you go to empty it.

Are there any downsides?

The only real drawback is the Roomba's suggested maintenance schedule. While it’s easy to empty, iRobot recommends you deep-clean the brush heads once every three times the Roomba takes a trip.

That means on a regular cycle you’re pulling it apart for a maintenance job twice a week. I’ve got it down to a 15-minute task that involves pulling out all the fibres that get stuck around the wheels of the Roomba, which is rather fiddly, if I’m honest.

However, I choose to think of it as a trade-off: in exchange for not having to vacuum daily, I have to clean brush heads twice a week. And I'd rather do that than vacuum the whole place.

Why would you choose the iRobot Roomba 690?

The price you pay for the Roomba 690 versus what you’d pay for something like a Dyson handheld is so damn competitive that you’re basically paying to never have to do the vacuuming ever again when you buy it. Prices start from just $849 (unless you find a discount or deal to save), and if you wanted to spend more on the model up, you’ll start to get into smart home territory with a vacuum that’s compatible with your Alexa and Google Home devices.

Overall, the Roomba is a great choice for anyone without the time to vacuum but who still wants the benefits of a clear, clean floor. And out of all the robot vacuums I've tested, this one is definitely my favourite.

Its battery lasts the longest, it navigates the house most efficiently, it finds it's charging base with the most ease and it flat-out does the best cleaning job.

You can check out the Roomba range on the iRobot website where you can read about the different models including the 690 that I trialed. Or shop the vacuum here.

Mia Steiber was the shopping editor for Finder. She previously worked for publications such as Bauer Media, The Daily Telegraph, POPSUGAR Australia, Gizmodo and Lifehacker. She has a journalism degree from the University of Technology Sydney, a travel writing certification from the ACIJ and and a total obsession with skincare and Australian fashion labels.