The Internet of Things is almost here, and the winning IOTA hackathon projects are a small window into the future.

A total of US$35,000 in prize money (fiat money, not crypto) went to the five winners of the IOTA flash hackathon. The contest started on 26 November, inviting anyone with the know-how to build solutions that use Flash to solve real problems.

What is IOTA Flash?

Flash is an off-Tangle payment channel which allows for instant no fee transactions.

You can find the IOTA Foundation’s explanation here, but in a nutshell, it’s almost exactly like the Lightning Network for IOTA.

"We received numerous high quality submissions, making it extremely challenging to decide on the winners. After a bit of internal deliberation we decided to increase the numbers of places that receive a prize from three to five," said the IOTA Foundation.

What's IOTA and how does it work?

From first place to fifth:

FogNet is a way for users to enter an IOTA Flash Channel over Bluetooth and exchange tokens for data requests. The team eventually aims to condense the FogNet into a hardware device to help decentralise the Internet and the way data is communicated online.

"The project stood out to us as it embodies [the] decentralised vision of IOTA," the Foundation said.

The second place project implemented IOTA Flash payments into the existing Home Assistant platform, and the integration has been officially added to the Home Assistant code base. 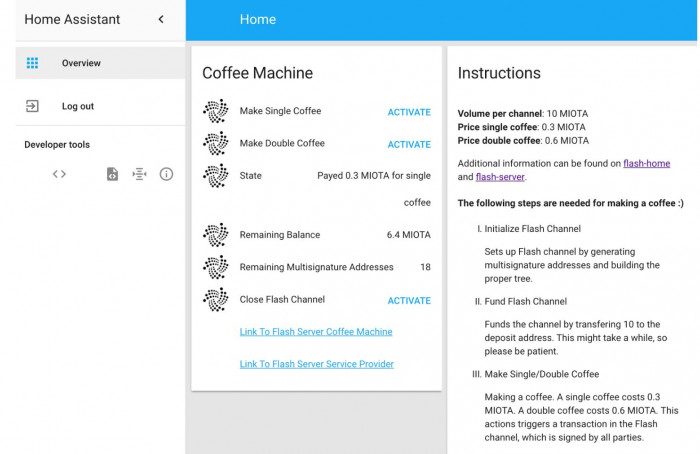 Priced at a reasonable 0.3MIOTA (50c at the time of writing) per cup

The demo showed an example of a Home Assistant-connected coffee machine being monetised on the IOTA network. The same system can be implemented for any of the 950+ supported Home Assistant devices, showing monetisation models of the Internet of Things in action.

"Simlyn allows for data to be ingested by [Microsoft] Azure's services and then consumed through a web interface in exchange for IOTAs," the Foundation explains. "The result is a simplified 'real time' data marketplace, in which you pay per 10 packets rather than once for access to the data stream."

Essentially it uses the IOTA Flash network in connection with the widely used Azure cloud computing service to demonstrate an example of a flexible "as needed" cloud-based data marketplace monetisation system.

Another relatively simple yet effective example of IoT in action, WIOTA hooks Flash payment channels up to a WiFi access point and allows the owner to charge users by the minute for their access to data.

Naturally, the owner can also kick users from the network if they fall behind on their minutely flash payments.

Interested parties are those which create demographic-specific "bounties," essentially requesting from specific user types. By selling requested data, users can fulfil these bounties.

The Internet of Things (IoT) is taking shape quickly, and much of its development is being spurred on by cryptocurrencies that recognised the inherent suitability of blockchain-esque systems for use on the IoT. IOTA, Waltonchain and IoT Chain are some of the main names in this space.

It's also worth remembering that the winning projects here are all functional and pretty much ready for immediate use, and that the IoT is increasingly becoming part of today's world rather than tomorrow's.

Large scale testing is already in the works, such as IOTA's partnership with the city of Taipei to trial Tangle-based citizen ID cards and data marketplace features.