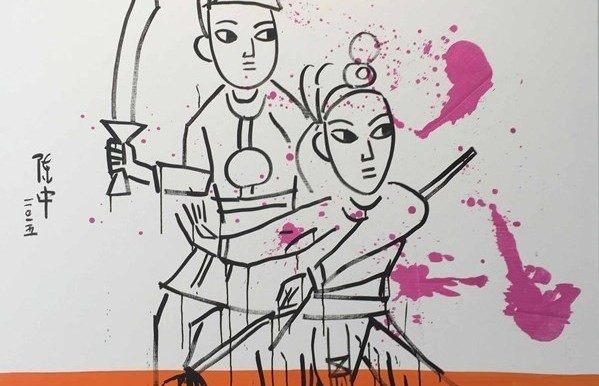 Relaxed, cross-cultural, bold and vibrant. Sound like a city you know?

Australian Chinese artist Zhong Chen has put his name to a lot of artworks over the years, but probably never expected to put his signature on a hotel. That's changing now, as Art Series Hotels introduces The Chen, its eighth Australian property.

Four of the seven current Art Series hotels are in Melbourne, and Chen's work is a natural choice for the fifth, especially for Melbourne. Much like the city itself, Chen's art marries playful lines and bold colours, to create a diverse world on canvas, with a lot more than initially meets the eye.

Art lovers can look forward to getting the signature Art Series tours and documentaries, as well as taking in the resident art library.

Of course it's also going to feed more than the soul. Four restaurants and bars, as well as a gym, events centre and rooftop pool guarantee a great time, while the built-in car park will definitely go a long way towards facilitating travel in this burgeoning neighbourhood.

Even if you don't BYO vehicle, there will still be Art Series branded Smart Cars and Lekker bicycles to explore the area.

Due to open in November 2017, The Chen will be in distinguished company. Art Series certainly aren't newcomers to the scene, with a range of other sophisticated properties in Melbourne, Brisbane and Adelaide, bookable right now.

As always, each hotel builds its own character around the signature artist, and the neighbourhood itself.

Prestigious, accessible and family friendly, just like the evergreen stylings of Dr John Olsen. Expect comfort and luxury in each well-appointed room, around the glass-bottom pool that rises above Chapel Street, and when you take to the high streets for the area's famous shopping.

Mark Schaller immerses himself in his work, giving everything over to the creative process in his purpose-designed studio. The Schaller Studio does likewise, immersing you in the artist's work. Each room features Schaller originals, the facade comes to life with an eight-metre mosaic and large scale sculptures are entwined with the hotel's landscaped gardens.

Large private balconies let you take it all in, while the multitude of dining options, and convenient location, let everyone see what Bendigo has to offer, both inside and out.

Michael Johnson is celebrated among Australian abstract artists, and The Johnson brings his work to life with open-planned rooms that retain all the most important and familiar comforts, while simultaneously stepping beyond the everyday.

With a convenient location near Brisbane's CBD, the 50m pool and sun deck let you make the most of Brisbane's weather, while onsite conference and event facilities mean you can get a lot more done. Not unlike the prolific artist.

Adam Cullen's work goes its own way. Bold, undeniably stylish and independent, it arrived at trendiness before it was cool.

Each room in The Cullen does the same. The spacious living areas are burting with energy, but are also fully self contained with kitchenette facilities, dishwashers, coffee makers and all the other essentials. This hotel is a great choice for travellers that love their independence.

Tommy Watson is one of Australia's most famous indigenous artists, producing artworks characterised by a combination of big picture elegance and fine detail. Melding the full spectrum of nature's colour with distinctly desert splashes, each piece always has details that you'll miss, but someone else will catch.

Just like his art, The Watson is best enjoyed communally, and was designed to do as much. The hotel's big picture includes sprawling grounds, a golf course, pool, gym, spa and business centre. The fine details, meanwhile, include art journals, original works and even hand-selected luxury toiletries in every room.

Charles Blackman is one of Australia's most celebrated artists, whose illustrated works include the 1950s Alice in Wonderland, and hundreds of others. His influential work will always be a part of Australia's artistic history, and has built the foundation for countless followers in later years.

The Art Series Blackman does likewise, built within and above the historic Airlie Mansion, and with a special eye towards showcasing some of Australia's most famous attractions from its central location, as well as some of Melbourne's best restaurants.

David Larwill's art is inspired by the environment, incorporating both natural and man-made features to create unmistakable, and at times confronting, results.

The aesthetics of the Larwill Studio hotel do the same, blending styles and colours freely, and to great effect. Likewise, your balcony views also overlook the city and the parks alike. Full onsite services, art classes and art utensils, as well as a remarkably convenient location overall, mean you can keep learning and exploring at Larwill Studio.